Burial metamorphism mostly affects sedimentary strata in sedimentary basins as a result of compaction due to burial of sediments by overlying sediments. As temperature increases with depth, both p and T contribute to metamorphism. Metamorphism occurs along a more-or-less stable geothermal gradient; the resulting metamorphic mineral assemblages are characterized by low recrystallization temperatures and an absence or reduced presence of deformational features. Burial metamorphism of sedimentary rocks is only loosely related to orogenic processes at plate boundaries ("anorogenic") and may also occur in plate interiors.

Ocean-ridge metamorphism takes place at mid-oceanic ridges in response to sea floor spreading. The plate tectonic setting is therefore characterized by a divergent plate boundary regime. This metamorphism is attributed to the high heat flow and intense fluid circulation that occurs along oceanic ridges. Resulting metamorphic rocks  usually include greenstones and amphibolites, i.e., the low- and medium-grade metamorphic equivalents of oceanic basalt. In order to convert basalt into greenstone or amphibolites, H2O must be introduced into the rocks, which means that hydrothermal circulation of fluids through the oceanic crust is required.

There are three main characteristics of such a type of metamorphism. First, there are a variety of orogenic processes which take place at different convergent plate boundaries. These include, among others, geotectonic settings, oceanic island arc, ocean-continent, and continent-continent collisions, each of which has distinctive thermal, burial and erosional profiles. Second, pre-collisional geometries of the continental margin may be rather diverse, ranging form wide, passive, "Atlantic-type" margin to small back-arc extensional basins. Finally, the nature and duration of interaction between crust and mantle determines the amount and timing of orogenic heat flow, intrusive events with associated heat advection into the crust, and exhumation rates. All these factors are likely to differ from one orogenic belt to the next. Classic orogneic metamorphic provinces include the Alps of central Europe, the Appalachian Mountains of eastern North America and the Andes of western South America.

Orogenic Metamorphism involves broadly concurrent deformation, resulting from contractional stress during convergence of lithospheric plates in the subduction zone and recrystallization resulting from p-T increases in the thickened crust. Increased temperatures in orogens are created because geotherms adjust to the crust that is gradually thickened by contractional overthrusts and folds, magmatic underplating and stacking of volcanic deposits. Temperature is generally sufficiently high in the lower crust to cause partial melting and generation of calc – alkaline magmas. These will ascend into the shallow crust and solidify as granitoid plutons. Isostatic uplift and subsequent erosion during and following orogeny may expose the crustal welt of metamorphic and plutonic rocks.

Orogens typically evolve over hundreds of millions of years and experience more or less discrete pulses of deformation or tectonic events related to changes in character of converging oceanic plates and their rates of convergence. Heating of the crustal welt may accompany these pulses or occur sometime else, but may also occur in distinct episodes. Consequently, regional terranes in orogens typically evolve through multiple episodes of deformation and recrystallization, each of these events lasting several million years. 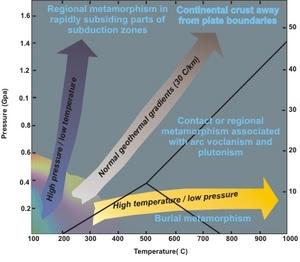