At Convergent plate boundaries or margins:

Box concept: Represents a volume of rock (igneous, sedimentary or metamorphic) that moves in x-y space, where x is the temperature (T) and y is pressure - depth (P) in a given time (∆t)when the equilibrium is reached. A characteristic P-T path is defined for the evolution of different tectonic setting, that provide information on the conditions (P-T-t) that were active during the metamorphism.

P-T Paths:  the complete set of T-P conditions that a rock may experience during a metamorphic cycle from burial to metamorphism (and orogeny) to uplift and erosion (Winter 2003). The P-T paths show the tectonothermal history of an individual rock volume (box in the animation), or a metamorphic terrane. There is a link between thermal an tectonic process during orogenesis. Determination of the P-T history in a specific metamorphic terrane can provide insight into its tectonic evolution. 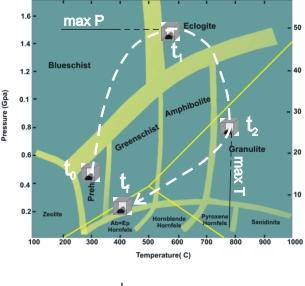 Hypothetical P-T-t paths for variations in P and T conditions through time of a volume of rock (Box, in the figure) that was deposited on the earth surface during progressive burial  (t0, initial time). The T-peak at t2 set behind the P-peak at t1. Prograde path occurs at increasing temperature, on the other hand retrograde paths follow decreasing temperature (t2 - tf) during uplift and erosion. This describes the clockwise P-T-t paths loops, typically observed in orogenics terranes. The equilibrium mineral assemblage at T-peak (t2)  remains essentially unchanged in most metamorphic with decreasing T - P along the retrograde segment. Source: after Best (2003), Winter (2003) and Jimenez (2006).