High-strain metamorphism deforms rocks with only minor thermal effects and occurs when the strain rate exceeds the ability of the rock to deform plastically. It is sometimes also called cataclastic metamorphism.

Deviatoric stress, strain rate and temperature are the most important variables in this type of metamorphism. Different minerals respond to deviatoric stress in different ways and variously exhibit the effect of the stress. The temperature has a first-order effect on the rheologic properties of materials.

High-strain metamorphism is typically produced along fault and shear zones in the upper and middle crust. It is usually restricted to orogenic zones and is therefore mostly located near plate margins. 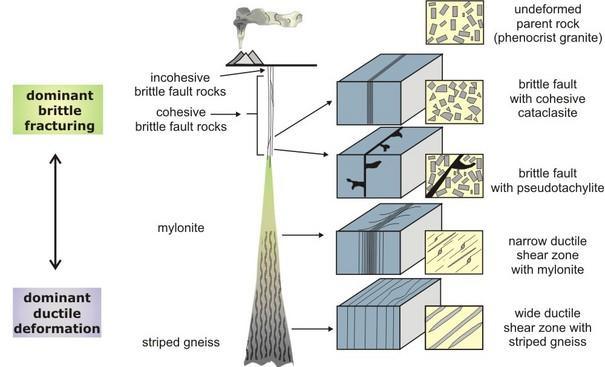 Distribution of the main types of deformed rocks with depth in the crust. a) Schematic cross section through a transcurrent shear zone. The zones may changes, occurring with increasing depth and metamorphic grade, ranging from non-cohesive gouge and breccia near the surface through progressively more cohesive and foliated rock. Note that the width of the shear zone increases with depth as the shear  becomes more ductile. b) Schematic representation of four typical fault rocks (cataclasite) and the local geometry of the shear zone in a m-wide block, developed from a phenocrystic granite. The transition between ductile-dominated deformation and brittle fracturing depends on rocks composition, geothermal gradient, bulk strain rate, fluid and metamorphics grade. Mylonite and banded gneiss occur with increasing depth and metamorphic grade. Source: Redrawn from Passchier and Trouw 1996.