Minerals weather chemically when they react with air and water. In these processes some minerals dissolve and others combine with atmospheric components (mainly water, oxygen and carbon dioxide) to form new minerals. The specific reactions include solution, oxidation, hydration and hydrolysis.

Pyroxene, amphibole, magnetite, pyrite, and olivine are most susceptible to oxidation because they have high iron content.

Iron contained in minerals combines with oxygen and water to form hydrated iron oxides as follows:

Hydrolysis: This reaction is responsible for the formation of clays, the most important mineral in soils. A typical hydrolytic reaction occurs when orthoclase feldspar reacts with slightly acidic water to form clay minerals, potassium ions, and silica in solution:

The ions released from silicate minerals in the weathering process are sodium, potassium, calcium, iron, and magnesium ions. They are carried away by rain and river waters or become important soil nutrients. 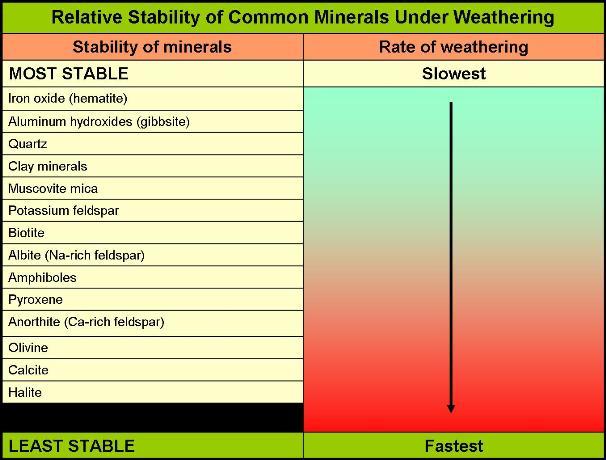 The rate of chemical weathering is controlled by:

The chemical stability of minerals: This is related to the tendency of a mineral to remain in a given chemical form rather than to react spontaneously to become a different chemical substance. The stability of a specific mineral is determined by the specific set of conditions (e.g. pressure and temperature) under which they formed. Quartz, for example, is the last mineral to crystallize from a silicate magma and has a greater chemical stability under physical conditions at the Earth’s surface than olivine, pyroxene, and feldspar. These minerals crystallize earlier and at higher temperatures and pressure, are therefore least stable and most subject to chemical weathering.

Relative stability of various minerals enables us to ascertain the intensity of weathering in a given area.

Surface area: A massive volume of unfractured rock is less susceptible to weathering than an equal mass of fractured rock. This is because the massive rock has less surface area on which atmospheric processes can act, whereas smaller fragments have a larger area upon which chemical and physical weathering can act.