Weathering and erosion are two important geologic processes in the rock cycle that play a major role in modifying the geologic expression of orogenic processes.

The high relief originated when mountains are built, creates disequilibrium within the Earth’s crust. Under these conditions, gravity acts by erosion, redistributing mass from higher altitudes to lower elevations in search of equilibrium defined by the base level.

After the building of mountains by tectonics and volcanism, chemical weathering and physical breakup shape the earth surface. They will destrog the excess topography of a mountain belt, converting rocks into sediment.

The removal by erosion of large volumes of rock from high altitude and its deposition elsewhere can result in a lightening of the load on the lower crust and mantle that  can cause isostatic uplift.

Rocks may move up or down in the crust, depending on the relative rates of erosion and thickening, and on their initial depth in the crust. Exhumation during thickening can only occur if rapid denudation accompanies the thickening process. During homogeneous thickening with erosion that is elevation-dependent, the initial depth from which rocks can be exhumed is only determined by the density distribution in the column and is independent of erosion or thickening rates. 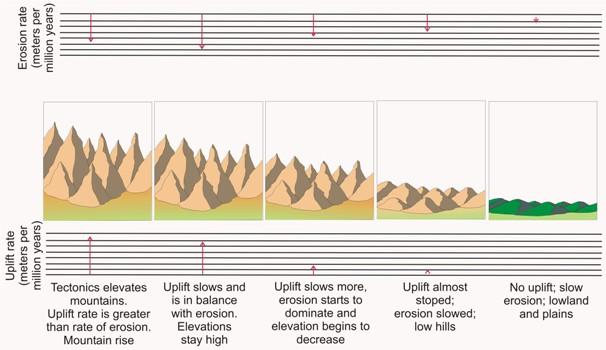