How is the evolution of stratospheric ozone affected by climate change, and how strong is the feedback?

The major goal of this project is to analyse available trace gas observations and to use them in state-of-the-art chemistry-climate and chemistry-transport models. This approach will aim to improve the understanding of the interaction between stratospheric ozone and climate change and the underlying dynamical and chemical processes. Satellite, balloon and aircraft observations will be used to assess the budgets and trends of stratospheric trace gases with an emphasis being put on stratospheric ozone and on halogenated key substances, in particular, very short-lived substances (VSLS). A combined GOME, SCIAMACHY, and GOME2 data record of ozone and selected species will be prepared for the period from 1995 to present and joined together with past ozone data to provide almost three decades of satellite ozone profile and column data. The detection and attribution of changes in ozone will be a primary focus using these extended and consistent data sets. Transient CCM simulations and supplementary sensitivity studies together with the observational data record will be analysed with regard to past and future evolution of stratospheric ozone and other key species. Using agreed scenarios on future trace gas emissions, the validated CCMs will be applied to establish the uncertainty range of future ozone changes. Thereby a better understanding of the relative contribution of different chemical and dynamical processes and their interactions to changes in stratospheric ozone will be achieved. Extended CCM simulations will be analysed to address the issue of a future ozone super-recovery in a changing climate. 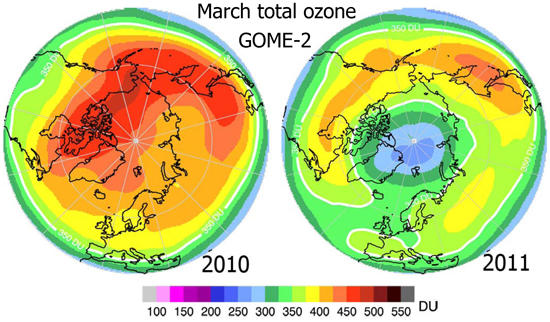 High ozone column values were observed by the GOME-2 instrument in the northern polar atmosphere during spring 2010. In contrast, a decline in polar ozone occurred in spring 2011 favoured by the meteorological conditions.

One major goal of this project is to analyze updated observational trace gas data together with state-of-the art models (CTMs and CCMs) in order to obtain a better understanding of the interaction between ozone and climate change and the underlying dynamical and chemical processes. New updated satellite, balloon and aircraft observations in combination with improved model calculations (CTM and CCM) are used to further reduce the uncertainties in the bromine budget, in particular the contribution from VSLS (very short lived substances) and to further elucidate on the role of iodine in the stratosphere. Furthermore detailed studies on the long-term evolution (trends and variability) of observed stratospheric trace gases with an emphasis on profiles of ozone, NO2 and aerosols from SCIAMACHY are proposed. Future evolution of stratospheric ozone will be investigated using updated EMAC CCM model runs, some of them in combination with an interactive atmosphere–ocean feedback. In addition to issues on the climate feedback on future ozone, particular emphasis will be given to the increasing role of N2O and GHG emissions in the future.