The stratosphere is strongly sensitive to radiative perturbations, as caused for example by the observed decrease of stratospheric ozone (O3) and increases in well-mixed greenhouse gases (GHG) and water vapour (H2O) concentrations (e.g., Ramaswamy et al., 2001; Langematz et al., 2003). Changes in stratospheric composition lead to a radiative forcing, defined as the net change in radiative fluxes at the tropopause, and can be related to a forcing of climate (e.g., Chapter 5 in WMO, 2007). 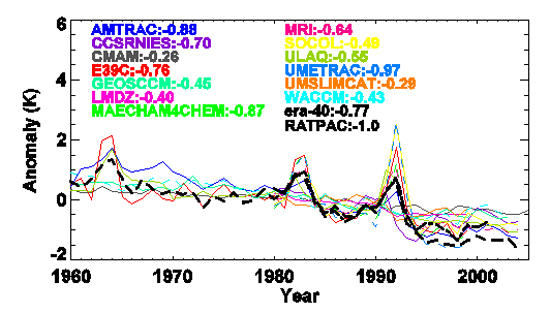 Figure 2:  The temperature anomalies are calculated for a mean reference period between 1980 and 1989. The numbers denote a linear trend in K/decade, calculated for the period 1980-1999. (Figure taken from WMO, 2007).

Future increases of GHG concentrations will contribute to a continued cooling in the stratosphere. As a number of chemical reaction rates in the atmosphere are dependent on temperature, the concentrations of chemical substances such as O3 are sensitive to temperature changes. For example, GHG-induced temperature and circulation changes are predicted by models currently to accelerate the global increase of O3 in the next decades, which might lead to a “super-recovery” of the O3 layer towards the end of this century, i.e. larger total O3 columns than observed around 1980 (e.g., Chapter 5 in WMO, 2007).