These objectives have not changed since the beginning of the first phase of SHARP in June 2009, and will therefore remain the guideline of SHARP during Phase II (SHARP-II). According to the recent WMO Scientific Assessment of Ozone Depletion 2010 (WMO, 2011) global annually averaged total column ozone is projected to return to 1980 levels before the middle of the 21st century and earlier than when stratospheric halogen loading returns to 1980 levels. The processes associated with stratospheric ozone depletion are largely understood, however, open questions remain. While for the next decades the decline in ozone depleting substances (ODS) will probably have the major effect on the expected increase of total ozone, there are other factors that might become more important during the second half of the 21st century. Increases in greenhouse gas (GHG) emissions will cool the stratosphere and thereby affect ozone in different ways, either by increasing upper stratospheric ozone due to slower chemical loss reactions, or decrease ozone by producing more polar stratospheric clouds (PSCs) and chemical destruction of polar ozone in the lower stratosphere. In addition, the Brewer-Dobson circulation (BDC) is projected to strengthen over the 21st century due to climate change, hence affecting the transport of ozone and water vapour. How will ozone evolve in a changing climate, i.e. what is the relative contribution arising from a cooling stratosphere and changing dynamics to trends and variability in lower stratospheric ozone? In March 2011 unprecedented low ozone amounts were measured over the Arctic (e.g., Manney et al., 2011). This was in strong contrast to unusually high ozone columns having been measured one year before, in March 2010 (c.f. Figure 1). The ozone minimum in 2011 could be explained by an unusually strong stratospheric polar vortex including large areas with temperatures low enough to produce PSCs and enhanced chemical ozone depletion. Hence, while the effects of ODSs will become less important, dynamical processes play an important role for the evolution of stratospheric ozone. How will climate change affect stratospheric dynamics and thereby ozone? Will stratospheric dynamical variability increase in the future with more years like 2010, or will the GHG induced stratospheric cooling dominate, leading to more 2011-like Arctic springs? And what will be the consequences for the troposphere-surface system? 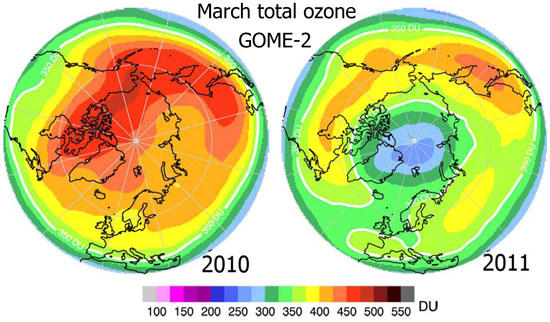 Are current climate models able to predict such a range of developments? The climate models used for the last IPCC climate projections were atmospheric General Circulation Models (GCM) which at their lower boundaries had been coupled to ocean models (atmosphere-ocean GCMs, AOGCMs) to account for the interaction between the oceans and the atmosphere on multi-annual time scales. Future changes of atmospheric composition are considered by prescribing scenarios of GHGs, while stratospheric O3 is either kept constant at present-day values or prescribed. There is increasing evidence now that stratospheric processes affect climate. Hence, AOGCMs contributing to the Coupled Model Intercomparison Project Phase 5 (CMIP5) for the 5th Intergovernmental Panel on Climate Change (IPCC) assessment report partially resolve the stratosphere. However and very importantly, there are specific aspects that are still simplified in the IPCC climate projections and that are known to impact climate. These have been formulated by the international research programme Stratospheric Processes and their Role in Climate (SPARC), which is one of the core projects of the strategic framework for 2005-2015 of the World Meteorological Organisation (WMO) World Climate Research Programme (WCRP). SHARP-II is aligned along the recommendations given in the three New SPARC Initiatives:

Improved climate predictions thus require the application of climate models that are able to simulate a) changes in the stratosphere, b) the vertical coupling between the stratosphere, the troposphere, and the oceans, and c) the interaction between chemical processes and dynamics. Such Chemistry-Climate Models (CCMs) of the atmosphere have been used to assess the future evolution of the stratospheric ozone layer (e.g., SPARC CCMVal, 2010; Chapter 3 in WMO, 2011). However, albeit the models agree in a future cooling of the lower stratosphere, they still display a considerable spread in the simulated temperature evolution of the past four decades. Future projections of ozone and other constituents are still containing significant uncertainties. Simulations with coupled ocean-atmosphere CCMs are currently under development; first data sets derived from such models systems are available.

In response to the open issues defined in the recent WMO Scientific Assessment of Ozone Depletion: 2010 (WMO, 2011), SHARP will continue to perform and coordinate research activities in Germany in the two leading themes:

The interaction between climate change and stratospheric dynamics and composition

The interaction between stratospheric change and tropospheric climate and weather

SHARP-II will make use of

An innovative approach of SHARP will be the inclusion of ocean-atmosphere interactions in CCM simulations. First CCMs coupled with ocean models are currently under development. These models include the vertical coupling from the middle atmosphere down to the oceans which will further improve the accuracy of climate predictions. Such a coupled atmosphere-ocean CCM has been developed in Phase I of SHARP and will be available to the SHARP consortium in Phase II.

In addition to the key scientific issues for atmospheric physics and chemistry to be investigated, a continuation of SHARP would enable German research groups to make significant contributions to the next WMO Scientific Assessment of Ozone Depletion: 2014. The establishment of the trends of ozone and related key constituents over the last decade are key inputs for the WMO Assessment. Partners of SHARP are already involved in the preparation of the new CCM simulations for the WMO assessment, however additional funding from SHARP would be essential for the performance, evaluation and analysis of the new CCM simulations.

The goals of SHARP closely align with international activities and research programmes. The assessment of the new SHARP CCM simulations would be an integral part of the SPARC Chemistry-Climate-Model-Validation (CCMVal) activity. Results achieved within the BMBF programme Mittelfristige Klimaprognosen (MiKlip), in particular in the projects STRATO (“The role of the stratosphere for decadal climate prediction”) and FASTO3 (“Fast stratospheric ozone chemistry for global climate models”) would be accessible for SHARP and strongly support the interpretation of the CCM simulations by providing information on natural contributions to climate variability and trends. Results of SHARP will further contribute to the interpretation of the upcoming IPCC simulations (e.g. CMIP5).

The complex scientific issues and variety of disciplines involved in climate change (dynamics, radiative transfer, atmospheric chemistry, observations, modelling) necessitate the synergistic and complementary effort of experts from different fields. SHARP brings together the national excellence in universities completed by important contributions from three large research facilities in the relevant disciplines of atmospheric science. To achieve the goals of SHARP, a coordinated use of numerical models and observational data has been established in Phase I. The German scientific community has a unique expertise in the exploration of global observational atmospheric chemistry data from the first generation of European based satellites and in the development of a new generation of atmospheric models. The development of state-of-the-art CCMs has made great progress in recent years. German CCMs based on the ECHAM model family provided important contributions to the recent WMO Scientific Assessments of Ozone Depletion: 2006/2010 (WMO, 2007, 2011). Updated improved model versions have been developed in the last three years (parallel actions to SHARP-I), and will be ready for use in SHARP-II. The success of the MIPAS and SCIAMACHY instruments aboard the Envisat satellite, which have been providing data since 2002, represent an enormous progress in observational information about the stratosphere.