The central objectives of the project STAMPF are to develop improved precipitation analyses and new statistical and dynamical scores and error measures for a scale dependent model evaluation of high resolution precipitation forecasts of the Lokal Modell (LM) of the German Weather Service (DWD). New dynamical and statistical parameters are used to assess the performance of non-hydrostatic models using a grid-resolution of smaller than 10 km and time resolution of hours to minutes. For the model evaluation numerical analysis of precipitation (FUB-analysis) was performed for different horizontal grid resolutions: 25 km for Europe, 7 km for Central Europe and 1 km for Berlin area. Therefore, hourly realtime precipitation data from WMO stations, 5 minute data from FU Berlin and the ``Berliner Wasserbetriebe''  and cloud classes from satellite measurements are applied. Moreover, the evaluation of precipitation in a natural way leads to the understanding of fundamental physical processes, which govern the life cycle of precipitation.

An important result is that high resolution analyses of precipitation fields reveal the spatially spotty and highly stochastic character of precipitation events in a grid resolution less than 10 km. Frequency distributions in this short scale as function of their intensity are strongly non-normal. Their high intensity part of the distribution can be described via a scale exponent of a power law. Another new statistical parameter which is introduced to compare model output and observations is the information entropy. The entropy difference can be used as a very general climatological independent evaluation parameter, which measures the amount of chance in a distribution. The separation of convective and stratiform rainfall is important for understanding precipitation processes and for separating the climatological behavior from the more universal features of rainfall (Langer et al., 2005). One main result is that the partitioning of precipitation into resolved and subgrid-scale parameterised precipitation does not correspond well to the FUB-classification of rainfall into convective and stratiform components. The main differences between FUB- and LM-analysis can be found in convective precipitation in summer and stratiform precipitation in winter. On the other hand the LM reproduces the total precipitation quite well.

In the proposal it was argued that several shortcomings of rainfall forecasts are an indication of precipitation being dynamically linked to fluid dynamical instabilities or the crossing of various thresholds. The newly designed DSI describes quantitatively the deviation and relative distance from a stationary and adiabatic solution of the primitive equations. The DSI² shows a remarkably high correlation with the precipitation analyses of the LM. This corroborate the assumption that, even without regarding the specific humidity field, the adiabatic stationary state of the atmosphere can be identified as a natural threshold for precipitation processes.

Rain-intensity-duration analyses show a remarkable power law behavior in the convective precipitation regime. Physically this feature can be traced back to the turbulent motion in the convective cloud layers. Applying the concept of atmospheric turbulence and diffusion pioneered by Richardson and Kolmogorov we could explain the universal scaling law for convective precipitation records. An important result is that the acceleration as a function of wave number instead of velocity is responsible for the generation of precipitation (Névir et al., 2005). 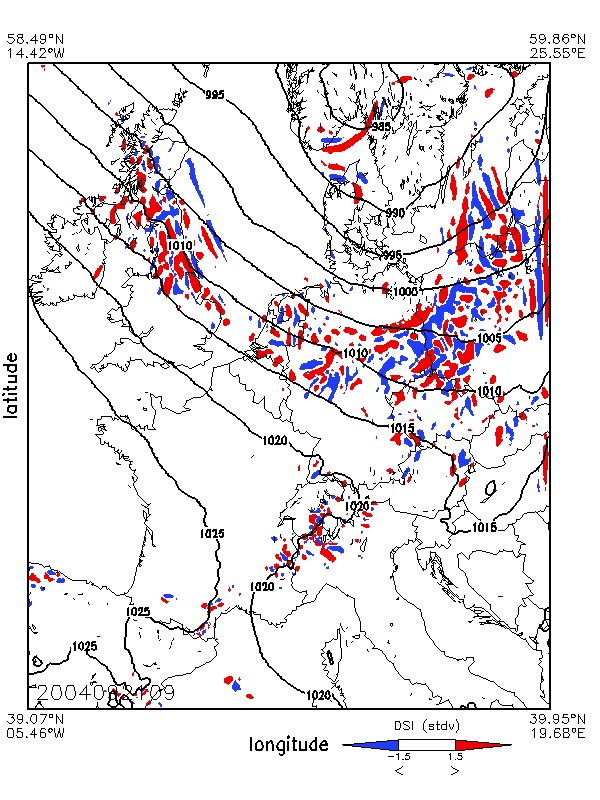