These images by the High Resolution Stereo Camera (HRSC) on board ESA’s Mars Express mission capture the mouth of Kasei Valles, which is the largest outflow channel system around the Chryse impact basin on Mars. Ancient mega-floods shaped this region and finally poured into Chryse Planitia. The views shown here were created by the Planetary Sciences and Remote Sensing group at Freie Universität Berlin. The systematic processing of the HRSC image data was carried out at the DLR Institute of Planetary Research in Berlin-Adlershof. 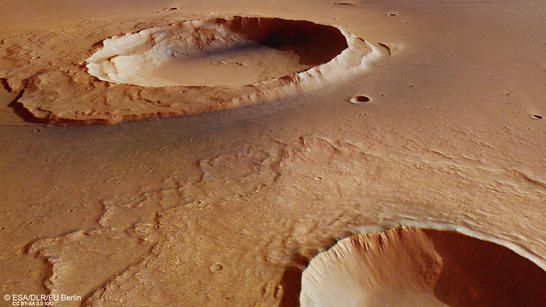 The Kasei Valles channel system (here an animation from 2014) extends around 3000 km from its source region Echus Chasma (located southwest of the image) to its sink in the Chryse Planitia impact basin (located east of the image). A combination of volcanism, tectonism, collapse and subsidence led to several massive groundwater releases from Echus Chasma, and flooding of the Kasei Valles region, mainly around 3.6 and around 3.4 billion years ago.

Worcester impact crater, with a diameter of about 25 km the largest one in the image, partly resisted the erosive force of the Kasei Valles mega-floods. Degradation of its ejecta deposits in places and preservation elsewhere resulted in the formation of a streamlined island that denotes the past course of the flow from west to east.

Next to Worcester crater a smaller, unnamed impact crater can tell a story on the nature of the subsurface: its rampart-like ejecta reveal that the bottom of the floodplain is rich in water and ice. By contrast, the radial ejecta morphology of the northernmost impact crater in the image is indicative of a different composition for the plateau material it is located on Terraces and small dendritic channels at the foot of this eroded 1 km high mesa hint to varying flood magnitudes during numerous episodes of fluvial activity that shaped the landscape. 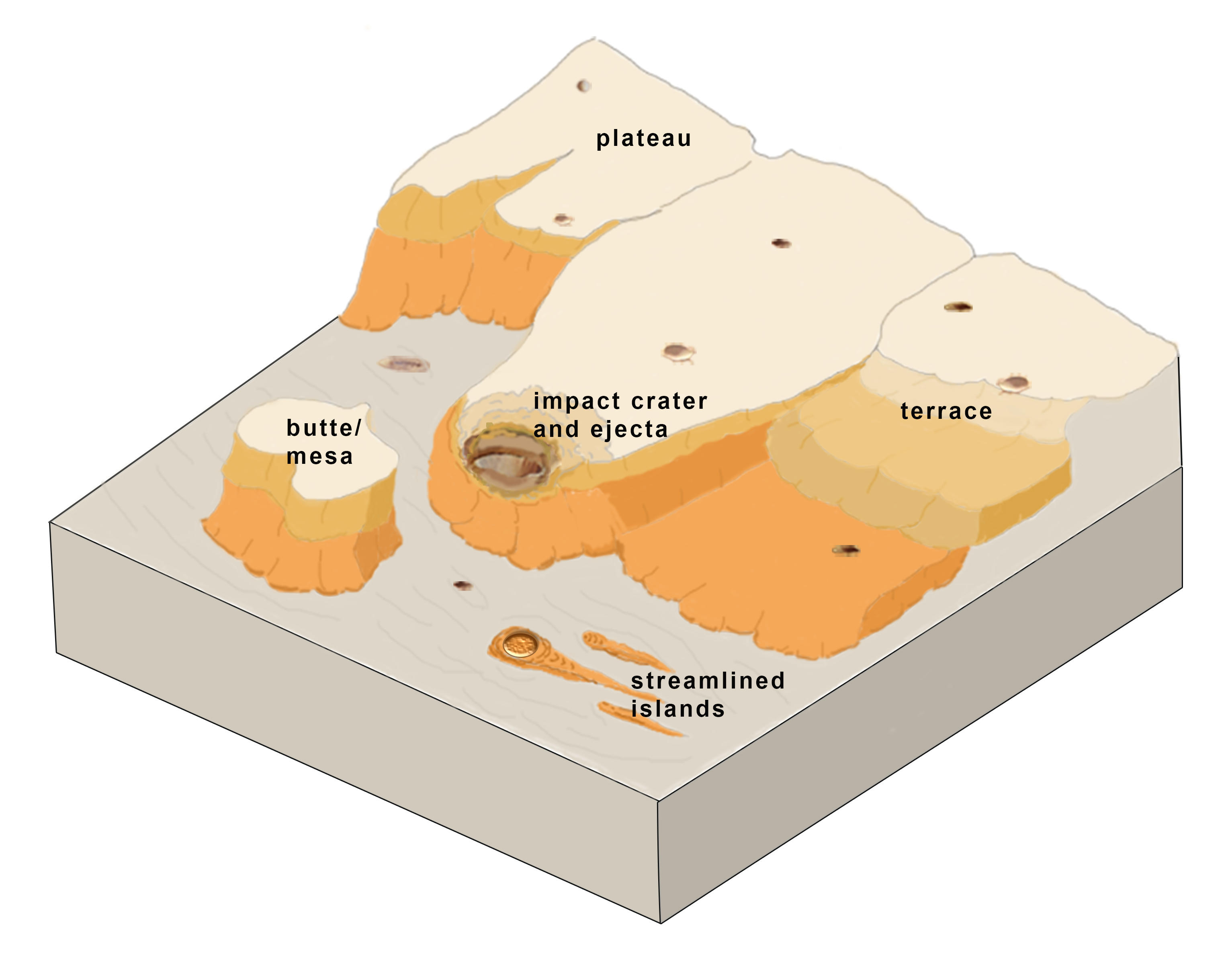 Sketch of fluvial activity and erosion

The images were acquired by the HRSC (High Resolution Stereo Camera) on 25 May 2016 during Mars Express Orbit 15714. The ground resolution is approximately 15 meters per pixel and the images are centered at 309° East and 27° North. The color image was created using data from the nadir channel, the field of view which is aligned perpendicular to the surface of Mars, and the color channels of the HRSC. The oblique perspective view was generated using data from the HRSC stereo channels. The anaglyph, which provides a three-dimensional view of the landscape when viewed using red-green or red-blue glasses, was derived from data acquired by the nadir channel and one stereo channel. The color-coded topographic view is based on a digital terrain model (DTM) of the region, from which the topography of the landscape can be derived. The reference body for the HRSC-DTM is a Mars sphere.

To download released raw images and DTMs of the region in GIS-ready formats, follow this link to the mapserve.