Ten years ago, on January 14, 2004 the High Resolution Stereo Camera (HRSC) on Mars Express took the first images of Mars in color and 3D. Who would have thought, that the MEX spacecraft would be still alive today? For this anniversary the Planetary Science and Remote Sensing Group at Freie Universität Berlin produced a movie of the Kasei Valles region. The systematic processing of the HRSC image data is carried out at German Aerospace Center (DLR).

The movie was rendered on the basis of a HRSC mosaic consisting of 67 single HRSC orbits (see PR #606 – 10 years Mars Express). The scene included in the mosaic spans 987 km in the north-south direction, from 19º to 36°N, and 1550 km in the east-west direction (280-310°E), covering 1.55 million square kilometres. The region has approximately the size of Mongolia. The HRSC digital terrain model has a resolution of 100 m/px. 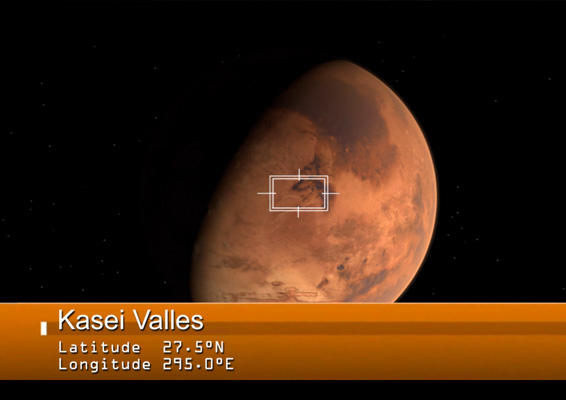 Kasei Valles is one of the largest outflow channel systems on Mars that was created by several gigantic flood events. From source to sink, Kasei Valles extends some 3000 km and descends by 3 km in altitude. Kasei Valles splits into two main branches that hug a broad island of fractured terrain – Sacra Mensa – rising 2 km above the channels that swerve around it. While weaker materials succumbed to the erosive power of the fast-flowing water, this hardier outcrop has stood the test of time. Slightly further downstream, the flood waters did their best to erase from existence the 100 km-wide Sharonov crater, its walls crumpled to the south. Around Sharonov many small streamlined islands form teardrop shapes rising from the riverbed as water swept around these natural obstacles. 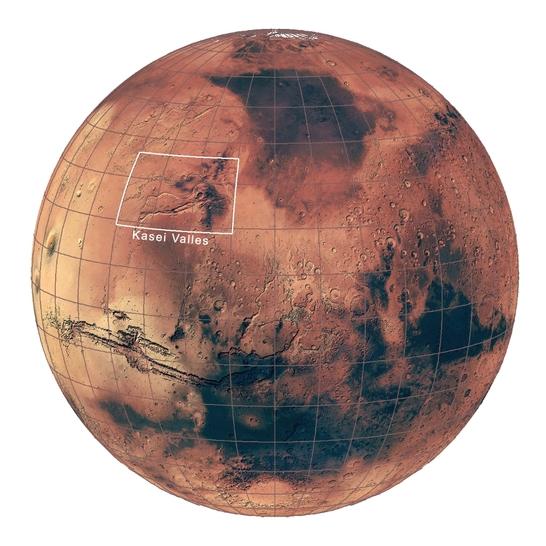 The context map is based on the Mars Global Surveyor Mars Orbiter Camera wide angle map of Mars. Credits: NASA/JPL/MSSS

Kasei Valles has likely seen many floods of varying intensity, brought about by the changing tectonic and volcanic activity in the nearby Tharsis region over 3 billion years ago. Under the strain of these forces the landscape was pulled apart, groundwater bursting from its ripped seams creating not only violent floods, but also the unique fracture patterns seen at Sacra Mensa and Sacra Fossae. Snow and ice melted by volcanic eruptions also likely contributed to torrential, muddy outpourings, while glacial activity may have further shaped the channel.