The Cambrian bioradiation of metazoans (Cambrian “explosion”) represents a major biotic revolution in Earth history during which most metazoan clades appeared within a short duration of time. Recent investigations have shown that the radiation of metazoans was not as instantaneous as previously postulated.

Still it is not yet understood whether major events in the geo-and hydrosphere were the causes or consequences for the Cambrian bioradiation. This is also due to the fact that an exact timing for the major steps in metazoan radiation and the exact sequence for divergences of many well known metazoan clades and those enigmatic and restricted to the Ediacaran-Terranovian is still highly controversial.

This project aims at investigating the evolution of biomineralization in early metazoans at the Pc-C boundary interval and to compare the detailed successions of skeletal and soft-bodied fossil communities at neighbouring cratons and terranes of western Gondwana. Central to this project will be the revision of the skeletal fossil record from poorly studied regions, focusing on the Kazakh Terranes.

Ediacaran – early Palaeozoic strata in Kazakhstan occur in several terranes, indicating a complicated geotectonic history. Good outcrops of Ediacaran to Cambrian sediments exist in Malyi and Bolshoi Karatau Range. In the Malyi Karatau Region terminal Proterozoic rocks sediments embrace reddish siliciclastics and dolostones of the Kyrshabakty Formation, which are disconformably overlain by black cherts and phosphorites of the Chulaktau Formation. The sedimentation of Chulaktau Fm. has been terminated by stromatolithic and Fe-Mn- rich beds, which also where uplifted and probably karstified. Further carbonatic sedimentation of overlying Shabakty Fm. commenced after a considerable hiatus. Both Chulaktau and Shabakty formations are partially rich in small skeletal fossils. Initial biostatistic comparison of faunas indicate closest similarities with shallow-water to slope settings of Yunnan and Guizhou Provinces of South China, but also with India and Iran during earliest Cambrian. 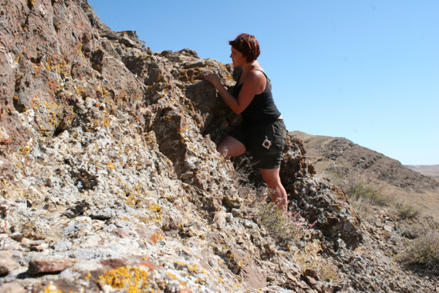 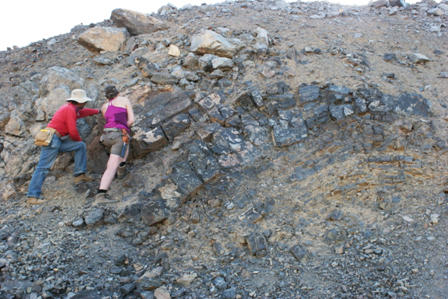 The project will develop a high-resolution biostratigraphic correlation chart for this region, which also allows the determination of durations of hiati. The appearance data of skeletal fossils in the West Gondwanan Region will be compared with published global data and estimates of divergence dates of major metazoan clades by molecular biology. Key to the project will be the discrimination between true biomineralization and diagenetic mineralizations. The appearance of biomineralization (siliceous, phosphatic, carbonatic, limonitic) in various metazoan clades at the PC-C transition will be studied in detail because the expression of biomineralized skeletons represents major biotic events in the early history of metazoans. Tracing of possible soft-bodied Orsten-type deposits and comparison with deposits described in the current project phase (embryos, polyps etc.) will constitute a major aspect of the proposed study. Nano-X-ray CT and en-SEM shall be applied to further study the detailed architecture of sclerites, scleritomes and especially Orsten-type fossils (“soft-bodied” fossils and fossil embryos).