Any outside observer considering the approx. 4500-million-year history of our planet would likely choose the 150 Ma-time interval between 650 and 500 Ma as one of the most dramatic periods in Earth history. This time period bridges the Precambrian-Phanerozoic boundary at 542 Ma and includes the newly-defined Ediacaran Period (ca. 630-542 Ma) and the Cambrian (542-493 Ma). The Ediacaran, in particular, is characterized by concurrent profound changes in global tectonics, possibly the largest climatic deviation from the steady-state mean global temperature since the Archean (popularized by the “Snowball Earth” concept), the first evidence leading up to the possibly “explosive” but indisputably largest evolutionary radiation event of the biosphere, and a significant increase of free atmospheric and oceanic oxygen. Subsequent Cambrian strata largely record the gradual establishment of a newly acquired ecologic stability, the beginning of the metazoan conquest of Earth's surface environment, and a profound rearrangement in the chemical composition of Earth's atmosphere and oceans.

The 88 Ma lasting Ediacaran eon set the stage of an unique ecosphere (r)evolution at the Pc-C boundary.

From the beginning of modern evolutionary thinking, the development of Earth's biosphere has been viewed as a long-lasting and mostly gradual evolutionary process, eventually producing well-organized habitats hosting most metazoan crown group animals. Charles Darwin and his contemporaries, however, also recognized the seemingly sudden appearance of completely evolved invertebrate groups at the beginning of the Cambrian period (and consequently coined the term “Precambrian” for the age of underlying and seemingly fossil-free sections). The discovery of the Middle Cambrian Burgess Shale biota (and subsequent discoveries in the Lower Cambrian Chengjiang biota) strengthened the notion of a very rapid evolutionary phase at the beginning of the Phanerozoic. Consequently, Preston Cloud (1948) coined the term “Cambrian Radiation”, and Seilacher (1956) identified an “explosive radiation of animal traces” during the earliest Cambrian. The term “ Cambrian Explosion ” ( sensu Brasier 1979) has then been used since the late 1970s. 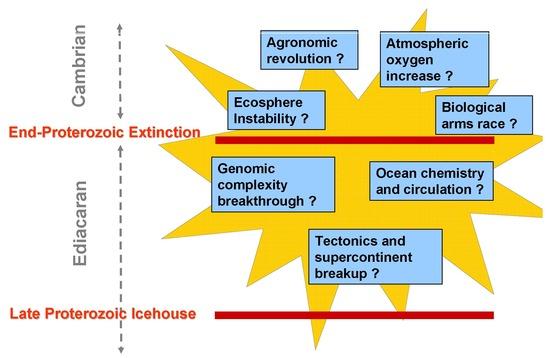 Simultaneous innovations in genoms, body size, habitats, and preservation occured during the Ediacaran eon. But what triggered the base-Cambrian ecosphere (r)evolution?

The key question, however, whether our current interpretation of the events near the Precambrian-Cambrian boundary as “explosive” might not rather reflect a temporal distortion and/or a preservational bias of the fossil record, has not yet been addressed adequately, and thus the follow-up question as to the nature of any intrinsic or external drivers possibly capable of modifying evolutionary rates has been left unanswered.

Because the new molecular data tend to support the classic “explosion” model, we need to initiate a better-focused search for the underlying and still enigmatic causes of the late Proterozoic to early Phanerozoic “evolutionary inventiveness”. Several theoretical approaches have listed possible causes, acting at different levels of the Earth system: Neoproterozoic plate tectonics may have served as a principal agent, providing rapidly changing environments during the late Precambrian (breakup of the supercontinent Rodinia followed by assembly of Gondwana). Modified oceanic circulation patterns and changing ocean chemistry in the aftermath of the late Proterozoic Icehouse may have caused or contributed to climatic instability. Kirschvink and Raub (2003) suggested that rapid “global warming” may have been caused by unprecedented true polar wander and resulting mass exhalation of high-latitude gas hydrates (but see Torsvik et al., 1998, for a representative dissenting view). Another likely push for an accelerated PC-C evolution possibly came from late Precambrian (ca. 700-545 Ma) oxygenation events during which a lack of oceanic overturn repeatedly and temporarily increased oxygen availability to marine shallow-water environments and thus assisted the evolution of heterotrophic organisms in Ediacaran shelf habitats. An improved nutrient supply in Ediacaran oceans, especially of the biologically limiting phosphorous and nitrogen supply, may have been a consequence of the improved oxygenation. 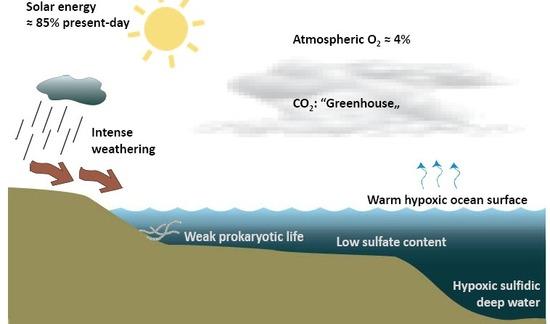 In the Forschergruppe, we are testing the hypotheses and their predictions resulting from the new molecular-systematic theoretical framework with paleontological, biostratigraphic, sedimentological, geochemical and geochronological techniques. Examples of our work include the isotopic study of the past oceanic and atmospheric CO2- content, the mobility of redox-sensitive elements, the temporal and facies evolution of mobility and predation, the change in physical properties of sedimentary bedding, and the variable availability of key nutrients to evolving metazoans. The sedimentary archives of the Ediacaran - basal Cambrian interval preserve ample evidence of the unique ecological events, such as voluminous phosphorite, chert and black shale deposits occurring in shallow- and deep-water facies (“oceanic anoxic events”).

Understanding the evolutionary processes in the late Precambrian-early Cambrian biosphere and distinguishing causes and environmental and ecological consequences of these events requires a multidisciplinary approach and constitutes one of the recognized frontiers of current international research. Our research will test numerous hypotheses relating to the increasingly well-documented bioradiative events during the Ediacaran and basal Cambrian and explore their connections to the still poorly understood environmental changes at that time.