Project on Solar Effects  on Chemistry and Climate Including Ocean Interactions

This is a joint proposal of the two partners Freie Universität Berlin and Max-Planck-Institut für Chemie. The common goal is to study the impact of variations in solar activity on earth’s climate in coordinated simulations with state-of-the-art climate model systems. The project will address aspects of coupling processes from the upper atmosphere to the oceans. It is split into two parts investigating the impact of solar variability on the decadal time-scale (Part A) and on the centennial to millennial time-scale (Part B). In Part A, fundamental questions of the 11-year solar signal and the causing mechanisms, such as the impact of variations in particle precipitation and UV radiation on chemistry, stratospheric ozone and climate and the solar signal in the troposphere will be studied. In Part B, effects of solar variability on climate of different pre-industrial periods will be studied, focussing on the period from the Maunder Minimum until today and the Holocene. 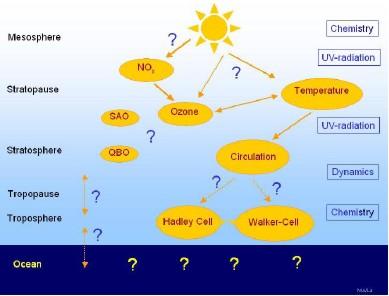