Simulating hypervelocity (velocities > 1km/s) dust/ice grain impacts onto space detectors is crucial for our ongoing and future research projects. During an impact, a fraction of the dust/ice particle is converted into elemental and molecular ions (a process known as impact ionization) that can then be analyzed by mass spectrometry. This is the principle method we use in Habitat-OASIS to explore the subsurface oceans of Enceladus with the Cosmic Dust Analyzer (CDA) aboard Cassini and the Surface Dust Analyzer (SUDA) on Europa Clipper. 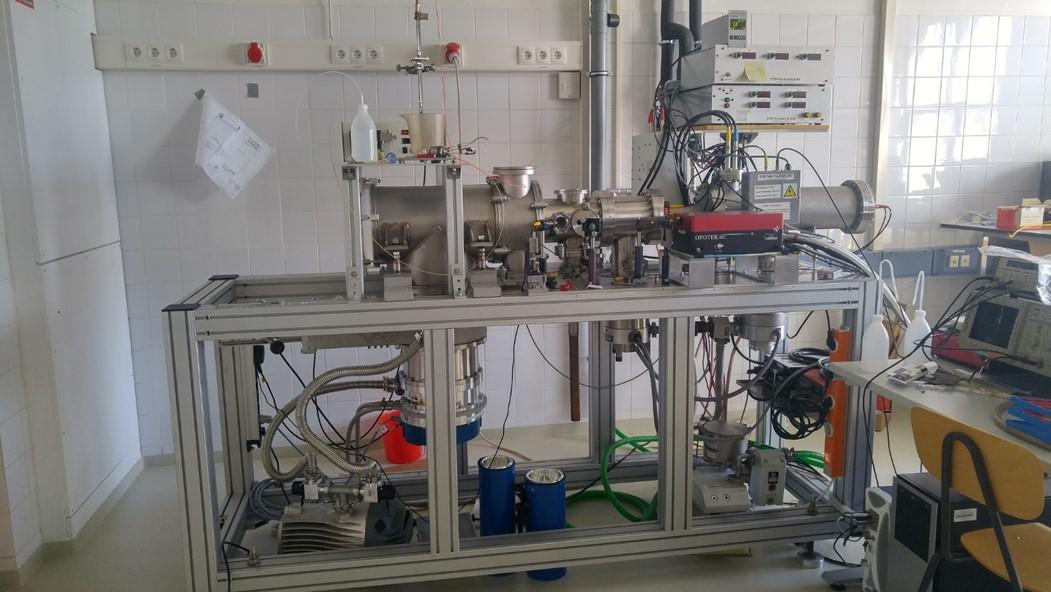 With increasing impact speeds, the greater energy available results in the generation of more ions, the breakup of molecular ions into elemental ions, and a reduction in the amount of cluster formation, but these effects are complex and compositionally dependent. Laboratory analogue experiments are an essential element of the interpretation of impact ionization mass spectra recorded in space. For mineral, metallic and/or organic dust particles, this can be achieved by electrostatic acceleration of micrometre (millionths of a metre) and sub-micrometre sized grains of known composition and firing them upon duplicates of the space detector. Our research group participates in such experiments at accelerator facilities in Germany (at Stuttgart University) and the USA (at the University of Colorado at Boulder). 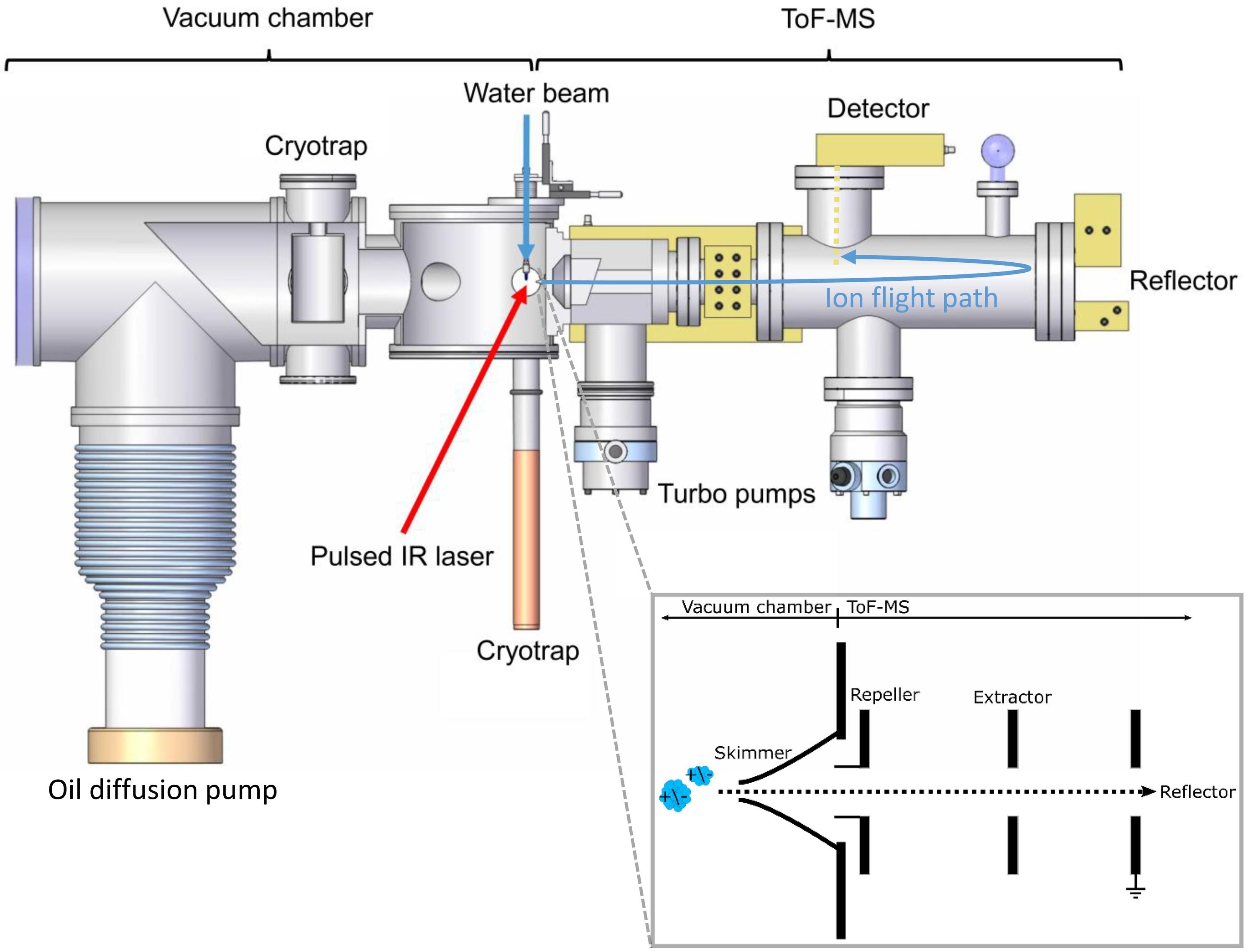 Figure 2: Diagram of the LILBID facility for simulating hypervelocity impacts of ice grains onto space-based impact ionization mass spectrometers and (inset) a schematic illustrating the instrument configuration underlying the principle of delayed extraction (From Klenner et al. 2019a).

However, to simulate impacts of ice grains in space we use a laser-based analogue apparatus, working via the principle of Laser Induced Liquid Beam Ion Desorption (LILBID, Figure 1). In this process a focused, pulsed, infrared laser intersects a micrometre-scale (radius of 6-10 µm) water beam (or similarly sized water droplets) of known composition, to simulate an ice grain impact (Figure 2). The laser acts onto the liquid in the same way as a mechanical hit. Energy from the laser (Nd:YAG, 20 Hz) creates a cloud of cations, anions, electrons and neutral molecules which is similar to the impact cloud created by a hypervelocity ice grain impact in space. The cations or anions are then directed into a Time-of-Flight (TOF) mass spectrometer which, after a predefined delay time, generates and records the analogue mass spectra (Figure 3). By setting a delay time, we select ions with specific ranges of velocities. By combining different delay times with variable laser energies, we can mimic spectra generated by different speed impacts in space. The laboratory laser apparatus is therefore key for the compositional analysis of ice grains detected in space, and has proved itself invaluable for interpreting Cassini Cosmic Dust Analyzer spectra from the Saturnian system. Similarly it will be crucial for the interpretation of SUDA impact mass spectra at Europa. 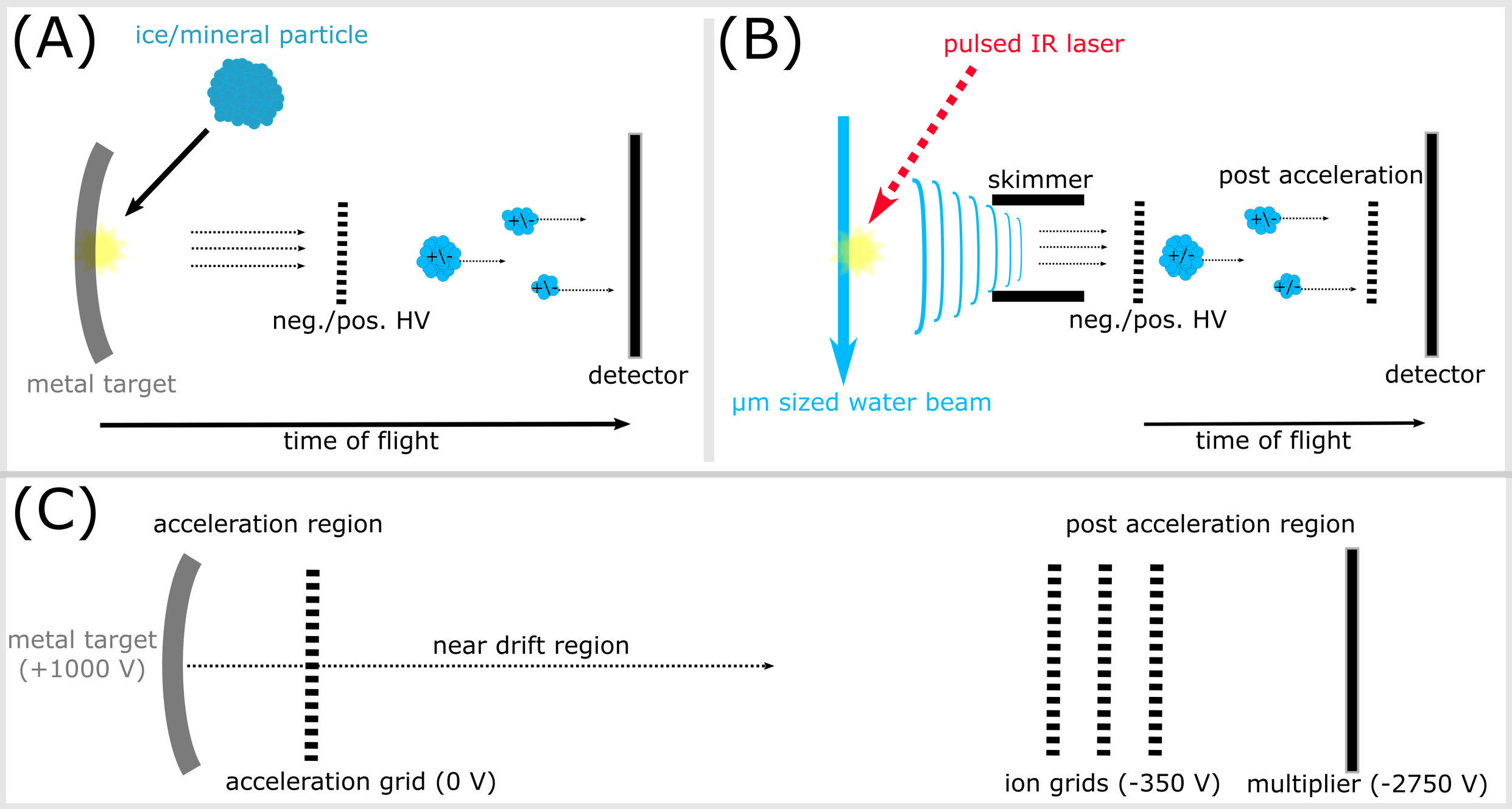 Figure 3: Comparison of the impact ionization process occurring in mass spectrometers in space (A) and in liquid beam laser desorption (B) for comparable energy impact and dispersion conditions. In A) ice grains hit a metal target and become partially ionized. In B) a pulsed infrared laser hits a water beam, which disperses and in turn creates ions and charged aggregates. In both cases the charged ions/aggregates are accelerated by a high voltage potential difference (neg./pos. HV) and detected after a characteristic (mass/charge dependent) time of flight. The lower panel (C) shows the main acceleration and drift zones within the CDA Chemical Analyzer mass spectrometer. Voltages are approximate and the regions are not to scale. Instrument recording may be triggered by charges exceeding thresholds on the target, acceleration grids or multiplier (From Klenner et al., 2019a).

Although this unique facility is currently used for simulating and interpreting spectra from the NASA/ESA/ASI Cassini mission and in preparation for the NASA Europa Clipper mission (the SUDA dust detector instrument) it is applicable to other future space missions. Currently, an internally available comprehensive spectral reference library from a wide variety of organic and inorganic analogue materials, in matrix solutions which simulate a range of icy grain bulk compositions, is available. The facility has also been upgraded with a new bipolar high-performance spectrometer. In the framework of the Habitat-OASIS ERC project, another substantial upgrade is planned, to employ an ultraviolet laser for the secondary ionization of neutral molecules formed when the infrared laser hits the water beam. The goal is that this setup will then also be able to record cation and anion spectra simultaneously.