Image data by the High Resolution Stereo Camera (HRSC) on board ESA’s Mars Express mission show a small portion of Tithonium and Ius Chasma, the northern and southern trenches in the western troughs of the giant Valles Marineris canyon system, the largest canyon system in our solar system. The High Resolution Stereo Camera (HRSC) is a camera experiment that was developed and is operated by the German Aerospace Center (Deutsches Zentrum für Luft- und Raumfahrt; DLR).

» read more in the main article below the gallery... 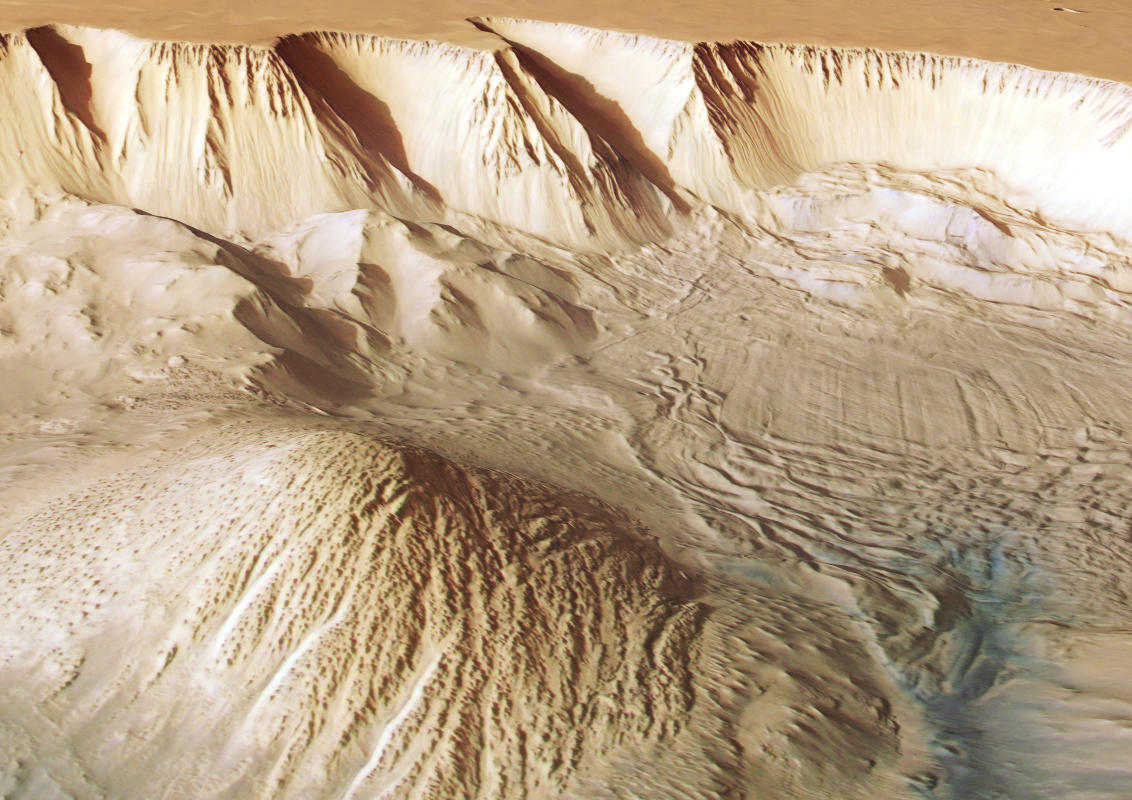 » read more about the Ius and Tithonium Chama

Tithonium and Ius Chasma are the northern and southern trenches in the western troughs of the giant Valles Marineris canyon system, the largest canyon system in our solar system.

Tithonium Chasma measures about 805 km east-west and Ius Chasma 840 km while Valles Marineris stretches for roughly 3800 km starting in the west with Noctis Labyrinthus and ending with Capri and Eos Chasma in the east. The distance this large canyon system spans equals the distance almost all the way across the United States (or from the North Cape to the southern tip of Sicily). The term chasma was designated by the International Astronomical Union to refer to a steep- sided elongate depression. Within the image presented here, the largest height differences from the plateau down into the deepest regions within the chasma reach more than 7000 m. The plan view color image shows Ius Chasma to the left (south) and Tithonium Chasma to the right (north). The plateau regions around and between the chasmata strikingly show the large fractures, that accompanied the formation of Valles Marineris.

The first eye-catching difference between the two valleys is the dark coloration of Tithonium Chasma. At closer look, dark dunes can be spotted in the upper portion of the image (northwest). Due to the closeness to the Tharsis volcanic region, much of the rocks present in this area are composed of layer after layer of lava flows and volcanic ashes that may be the source of the dark colored dune-forming sands. Another very interesting feature are the two light-toned mounds, one just facing the dark dune field and cut by the image border and the other in the middle of this part of Thithonium Chasma. They measure more than 3000 m in height and display a surface that was intensely eroded by wind. These erosional features are called yardangs and indicate that the material forming these dome shaped mounds is much weaker and easily erodible compared to the surrounding rocks. The floor between the two light toned deposits shows peculiar little knobs, presumably made out of the same material like the mounds. Spectral investigations indicate important concentrations of water-bearing sulphate minerals in these deposits. Many scientists believe that these deposits developed by evaporation at a time the chasmata were filled with liquid water, this formation scenario however is still strongly debated in the community.

Large mass wasting/landslide deposits can be found around the central light-toned mound. The larger one derives from the collapse of the canyon wall northeast (below the mound) and looks relatively recent, displaying diverging striations and apron-like lobes at its termination. It is also overlain by smaller landslides in the lower part of the image, this can best be seen in the color-coded terrain model. Another large slide can be found south (left) of the central mound. This one however looks much more eroded and might be older. The landslides occur also in higher regions, as displayed by the “small” 15 km wide deposit located close to the breached crater rim in the central portion of the image.

Only a tiny bit less spectacular is the floor of this part of Ius Chasma. The hummocky and crested surface appears to show back-tilted blocks and mass wasting deposits, remnants of the collapse and slump of flank materials. Interestingly the southern (left) flank of Ius Chasma shows several parallel scarps in a similar east-west orientation as the chasmata and faults themselves. Here, the ancient extensional tectonic history is documented in the deposits on the chasma floor.

The images were acquired by the HRSC (High Resolution Stereo Camera) on 21 April 2022 during Mars Express Orbits 23123. The ground resolution is approximately 25 meters per pixel and the image is centered at about 272° East and 6° South. The color image was created using data from the nadir channel, the field of view which is aligned perpendicular to the surface of Mars, and the color channels of the HRSC. The oblique perspective view was generated from the digital terrain model, the nadir and color channels of HRSC. The anaglyph image, which creates a three-dimensional impression of the landscape when viewed with red/blue or red/green glasses, was derived from the nadir channel and one stereo channel. The color-coded topographic view is based on a digital terrain model (DTM) of the region, from which the topography of the landscape can be derived. The reference body for the HRSC-DTM is a Mars equipotential surface (Areoid).

HRSC is a camera experiment that was developed and is operated by the German Aerospace Center (Deutsches Zentrum für Luft- und Raumfahrt; DLR). The systematic processing of the camera data took place at the DLR Institute for Planetary Research in Berlin-Adlershof. The working group of Planetary Science and Remote Sensing at Freie Universität Berlin used the data to create the image products shown here.