» read more in the main article below... 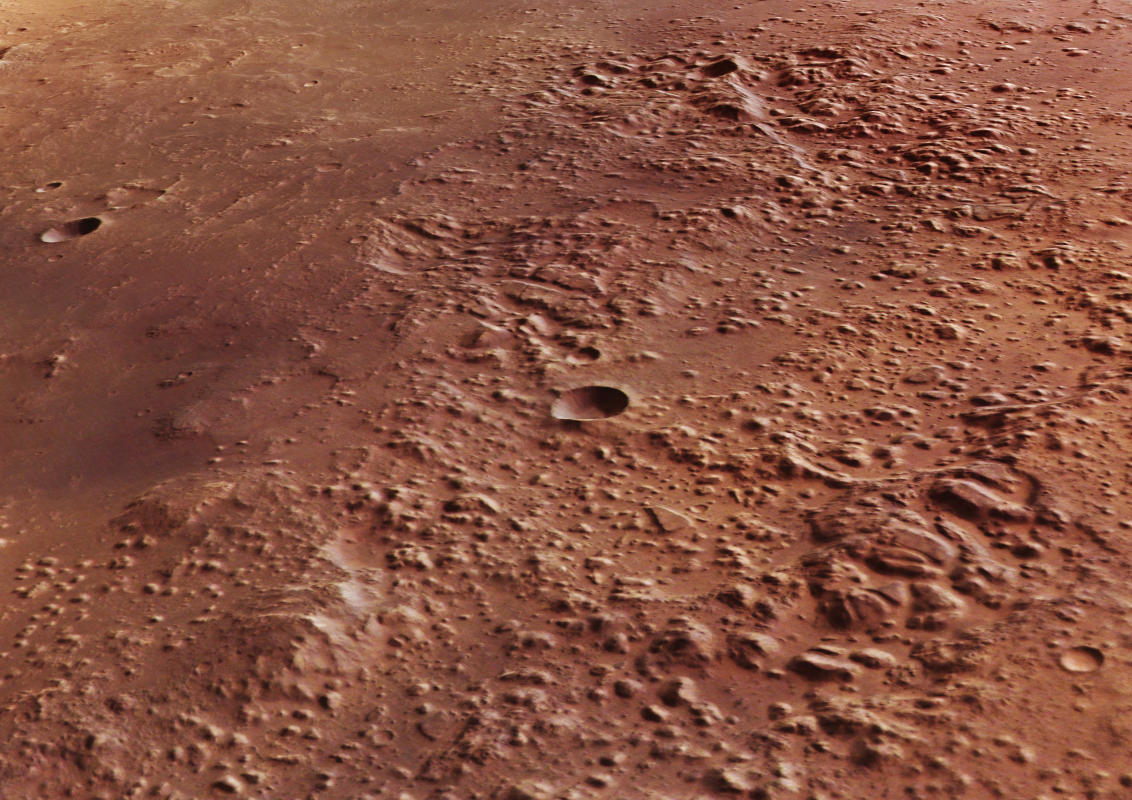 A long history of water and cratering

Located in the ancient Noachia Terra region within the Margaritifer Sinus quadrangle, the Holden Basin lies adjacent to Holden crater, named after the American astronomer Edward Singleton Holden (1846-1914). Today, the crater and the basin are part of the so-called Uzboi-Ladon-Morava-outflow system, also called ULM system.

Before the impact that created the 140 km in diameter Holden crater, the ULM outflow system was a long series of channels and sinks that emerged from the Argyre basin and traversed northward through Uzboi Vallis into Holden Basin, a large, ancient impact structure. From there it leads through Ladon Valles into Ladon basin, another very large ancient impact basin (see dashed lines in global overview map). It continues through Morava Valles towards the sink of the Margaritifer basin. Even Ares Vallis is believed to have been created by the outflows of the ULM system (see global and overview map images). Taken together, the total area drained may have reached up to 9% of the Martian surface. The impact that created Holden crater most likely happened in the Late Noachian, after the main activity of the ULM. The impact and formation of Holden crater interrupted the ULM outflow system, but Uzboi Vallis to the south breached the up to 900 m high crater walls making Holden the terminal basin for Uzboi and Nigral Valles. Although there is no visible outlet valley at Holden, an area of collapse can be spotted at the eastern side of the crater towards Holden Basin. There is no evidence for significant discharge and through-flowing after the impact, but some minor discharge may have happened along the ULM system after Holden crater was formed. Certainly, the floor of Holden basin was filled with large amounts of ejecta material subsequent to the impact forming Holden crater.

A chaotic terrain and the mouth of Ladon Valles

The image shows a chaotic terrain located in the deepest parts of the Holden basin. Here, Ladon Valles starts and travels east, out of the lower part of the image (see color-coded terrain image). The very beginning of Ladon Valles can be seen at the eastern (bottom) edge of the image. Water-bearing materials must have been present in the subsurface and melted in a later process forming the chaotic terrain. The left side of the images (south) shows the slope of the eastern plateau at Holden basin. Here, several smaller and relatively fresh-looking valleys showing width of up to 500 m can be spotted, flowing into the basin. However, a continuation towards the deeper parts of the basin is no longer visible. It is not clear what caused the formation of the chaotic terrain.

The complex history of the ULM system, paired with the overprint by impact, makes the region an interesting goal for future investigations. In addition, Ladon Valles and especially Holden crater both contain layered and phyllosilicate-bearing deposits, making them high-ranking targets for the search for ancient life on the red planet.

The images were acquired by the HRSC (High Resolution Stereo Camera) on  24 April 2022 during Mars Express Orbit 23133. The ground resolution is approximately 19 meters per pixel and the images are centered at about 329° East and 25° South. The color image was created using data from the nadir channel, the field of view which is aligned perpendicular to the surface of Mars, and the color channels of the HRSC. The anaglyph image, which creates a three-dimensional impression of the landscape when viewed with red/blue or red/green glasses, was derived from the nadir channel and one stereo channel. The oblique perspective view was generated from the digital terrain model, the nadir and color channels of HRSC. The color-coded topographic view is based on a digital terrain model (DTM) of the region, from which the topography of the landscape can be derived. The reference body for the HRSC-DTM is a Mars equipotential surface (Areoid).

HRSC is a camera experiment that was developed and is operated by the German Aerospace Center (Deutsches Zentrum für Luft- und Raumfahrt; DLR).The systematic processing of the camera data took place at the DLR Institute for Planetary Research in Berlin-Adlershof. The working group of Planetary Science and Remote Sensing at Freie Universität Berlin used the data to create the image products shown here.