Three at one stroke in Terra Sirenum on Mars

These images by the High Resolution Stereo Camera (HRSC) on board ESA’s Mars Express mission show a line-up of three impact craters in one of the oldest regions on Mars, Terra Sirenum. The detection of clay minerals in the northwestern part of Terra Sirenum hints to a complex aqueous history in the Martian past. The views shown here were created by the Planetary Sciences and Remote Sensing group at Freie Universität Berlin. The systematic processing of the HRSC image data was carried out at the DLR Institute of Planetary Research in Berlin-Adlershof. 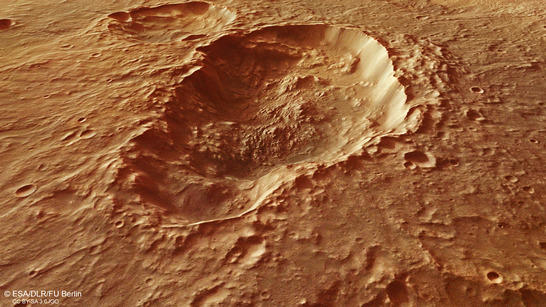 At first glance the depression, approximately 45 kilometres long and 24 kilometres wide in the right (northern) half of the image, seems unspectacular. However, in fact it is three superposed impact craters, presumably formed by a single meteorite that broke up into three fragments prior to impact. The other possibility – that the craters were formed as a result of three impact events at widely different times, is less likely as all three craters are in the same condition and so have presumably been exposed to erosion for the same amount of time. 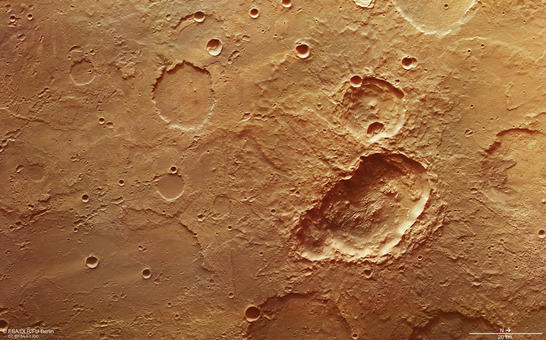 The triple crater is characterised by multi-layered ejecta deposits, where the overlapping of the ejecta material from the three craters has given rise to a type of "butterfly shape" (cf. PR of March 4, 2011). To form an ejecta blanket like this, the impact must have occurred at a low angle. In the color image and color coded digital terrain model, a so-called "forbidden zone" can be seen at the upper right end of the triple crater where there is no ejecta material. It indicates that the meteorite came from a northwesterly direction (north is to the right in these images). 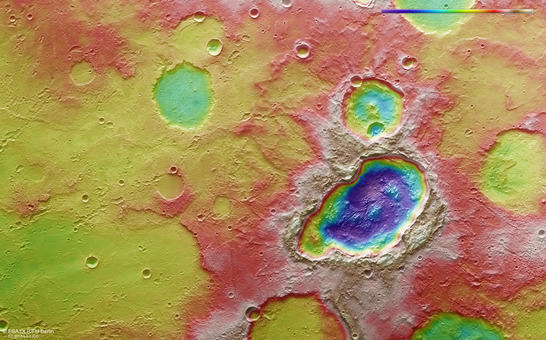 Layered deposits are found at the bottom of the triple crater, as well as in many other impact craters in northwest Terra Sirenum. Also in Terra Sirenum, a very ancient highland region of Mars, spectral signatures of clay minerals have been identified within impact craters and on intercrater plains. These detections come from the spectrometer experiments OMEGA on board the Mars Express mission and CRISM on board the Mars Reconnaissance Orbiter mission. Both layered deposits and clay minerals are attributed to water-rock interaction. 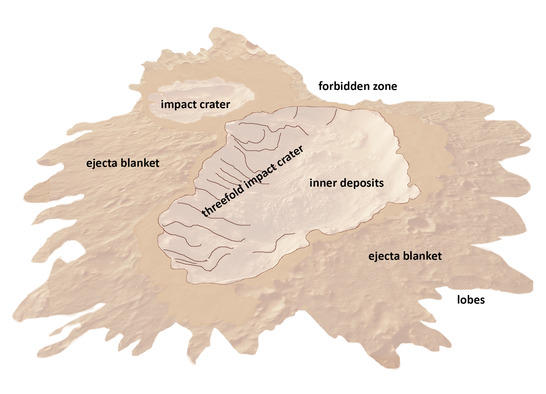 Presumably there was a period of aqueous activity with groundwater upwelling and evaporation in the past. Hydrological models of this region predict an ancient high water table that led to groundwater inflow into craters and potentially ponding of the water. The large diversity of mineral traces and deposits left by the evaporating surface water and that are visible today offer scientists the opportunity to investigate a more than 3.7-billion-year-old Martian landscape altered by water. 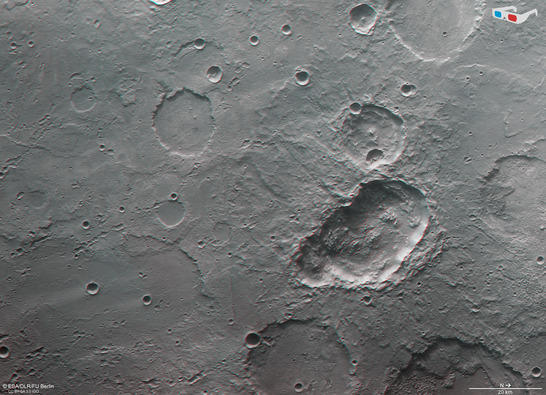 The images were acquired by the HRSC (High Resolution Stereo Camera) on 28 January 2017 during Mars Express Orbit 16565. The ground resolution is approximately 22 meters per pixel and the images are centered at 198° East and 27° South. The color image was created using data from the nadir channel, the field of view which is aligned perpendicular to the surface of Mars, and the color channels of the HRSC. The oblique perspective view was generated using data from the HRSC stereo channels. The anaglyph, which provides a three-dimensional view of the landscape when viewed using red-green or red-blue glasses, was derived from data acquired by the nadir channel and one stereo channel. The color-coded topographic view is based on a digital terrain model (DTM) of the region, from which the topography of the landscape can be derived. The reference body for the HRSC-DTM is a Mars sphere.