Flight over the north polar ice cap of Mars 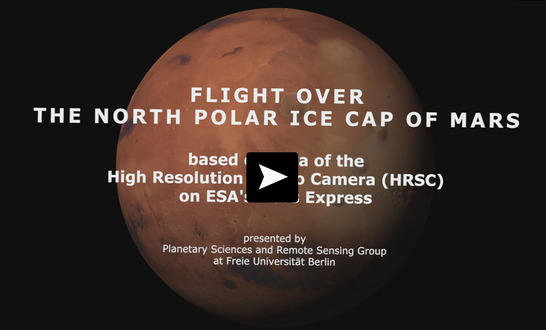 The north polar ice cap of Mars appears like a gigantic spiral out of ice and snow. Dark troughs in which wind-transported dust and deposits accumulated, alternate with white, ice-covered mounds. A particularly striking dark trough is Chasma Boreale, to be seen in the midterm of the movie. It is an up to 100 kilometer wide and 500 kilometer long canyon that cuts two kilometers deep into the north polar ice cap. Dark deposits on the bottom of Chasma Boreale are dunes made up of black sand that has been carried by wind into the canyon. The origin of Chasma Boreale is unclear: the structure could have been formed by non-uniform accumulation of ice and dust, by melting processes or by wind erosion.

Winter on Mars lasts twice as long as winter on Earth, since Mars is more far from the sun and takes nearly twice the time for an orbit. During winter season the north polar ice cap of Mars is typically covered by thick carbon dioxide clouds, which makes HRSC observations difficult. Therefore, the images on which the Mars-animation is based on where mainly acquired during the summer seasons.