Beginning of 2017 corresponds to northern hemisphere winter season on Mars. A new High Resolution Stereo Camera (HRSC) color image mosaic, generated out of 32 individual orbit stripes, reveals the beauty of the northern ice cap of Mars. The HRSC experiment is carried by the ESA Mars Express Orbiter and operated by the German Aerospace Center (Deutsches Zentrum für Luft- und Raumfahrt; DLR). The mosaic was created by the Planetary Sciences and Remote Sensing group at Freie Universität Berlin. The systematic processing of the HRSC image data was carried out at DLR. 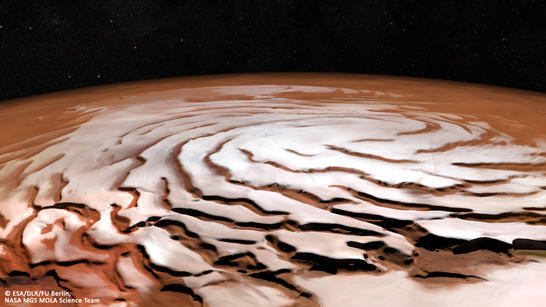 The pictured permanent north polar ice cap of Mars is composed of water ice and dust and covers an area of approximately 1x106 km². The volume of the permanent cap is estimated to be 1.2x106 km³, about half the size of the Greenland ice cap on Earth. The ice cap has an average thickness of approximately two kilometres. Temperatures fall to below -125 degrees Celsius during the Martian winter, which is twice as long as Earth's due to Mars' two-year orbital period and is characterised by long polar nights due to the tilt of its rotational axis. Only in the Martian winter season, temperatures are cold enough for carbon dioxide to precipitate from the atmosphere, forming an additional seasonal cap of carbon dioxide ice.

Characteristic features of the north polar cap are the dark troughs that spiral outward from the pole in counterclockwise direction, and a prominent trench at about 300°E with a length of 500 km and a width of up to 100 km, termed Chasma Boreale. 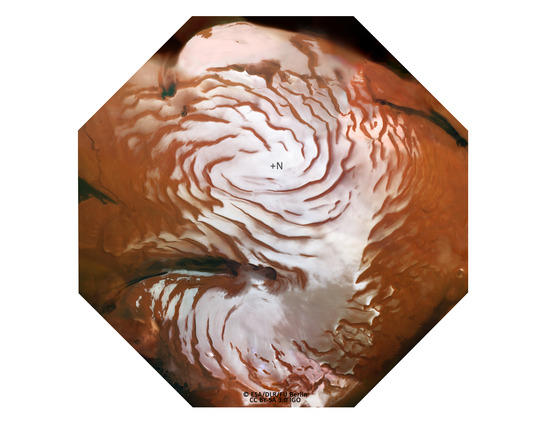 Radar investigations of the north polar cap were performed by MARSIS on Mars Express and by SHARAD on Mars Reconnaissance Orbiter. They show that the ice cap is made up of many individual layers that are considered a valuable archive for the climate of Mars during the past millions of years. Some radar data hint to wind transport and atmospheric deposition as dominant processes for the formation of the spiral troughs and trenches. 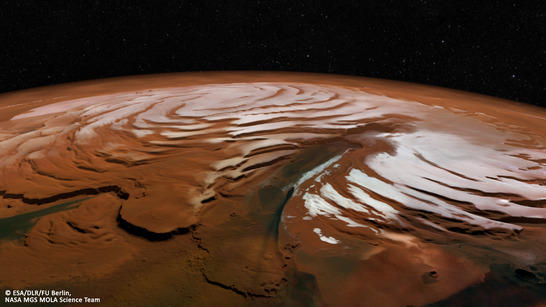