The images presented, acquired by the High Resolution Stereo Camera (HRSC), which is operated by the German Aerospace Center and carried on board ESA’s Mars Express spacecraft, show an impact crater with a striking ejecta blanket north of the huge Hellas impact basin. The views shown here were created by the Planetary Sciences and Remote Sensing group at Freie Universität Berlin. The systematic processing of the HRSC image data was carried out at the DLR Institute of Planetary Research in Berlin-Adlershof. 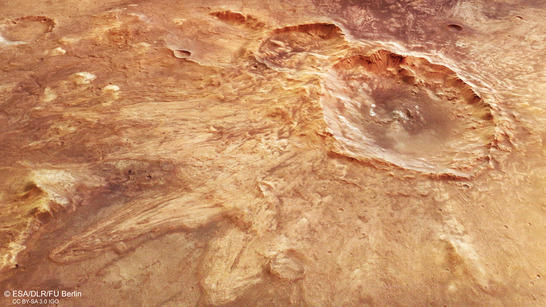 Meteorite impacts have changed the surface of Mars over billions of years. The energy transferred into the ground by impacts fractured the outer shell (crust) of Mars, such that subsurface material was partly excavated, and surface material was buried elsewhere. The debris ejected by an impact forms specific deposits falling back to the surface. The characteristics of these deposits, so-called ejecta blankets, depend on the crater size, the nature of the ground, and the presence of an atmosphere. Consequently, from the analysis of different impact ejecta, scientists can learn something about the subsurface properties of Mars.

Many Martian impact craters show lobate or multilobed ejecta patterns with distal ridges (ramparts) that are attributed to the presence of water or ice in the subsurface. The 32-kilometer-diameter crater in the center of the images belongs to a class of impact craters with multiple layer ejecta deposits. Up to three layers of sinuous ejecta lobes can be recognized radially to the crater, some of them terminate in ramparts. These multiple layer ejecta deposits were emplaced by flow processes during crater formation, and might have resulted from a combination of impact into the water-rich ground, and interaction of the ejected material with the Martian atmosphere.

The impact crater with the striking ejecta blanket is located north of the Hellas impact basin, in an area that is suspected to be the former drainage basin of a lake that could have existed within Hellas on early Mars. Thus, at the time of impact one can assume groundwater was present near the surface, leading to the special “fluidized” appearance of the ejecta deposits and to the formation of small valleys flowing to the south (left in images), features that can still be observed today. 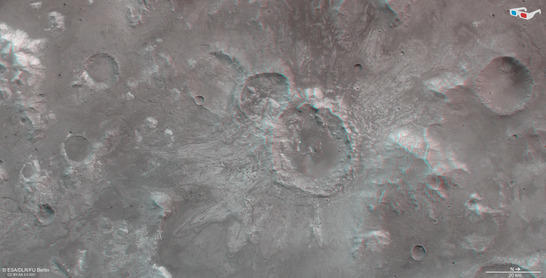 The images were acquired by the HRSC (High Resolution Stereo Camera) on 3 May 2017 during Mars Express Orbit 16890. The ground resolution is approximately 21 meters per pixel and the images are centered at 70° East and 22° South. The color image was created using data from the nadir channel, the field of view which is aligned perpendicular to the surface of Mars, and the color channels of the HRSC. The oblique perspective view was generated using data from the HRSC stereo channels. The anaglyph, which provides a three-dimensional view of the landscape when viewed using red-green or red-blue glasses, was derived from data acquired by the nadir channel and one stereo channel. The color-coded topographic view is based on a digital terrain model (DTM) of the region, from which the topography of the landscape can be derived. The reference body for the HRSC-DTM is a Mars equipotential surface (Areoid).