A desiccated fluvial valley with tributaries in the Libya Montes region on Mars can be seen in recent images taken by the High Resolution Stereo Camera (HRSC) on board ESA’s Mars Express spacecraft. The views shown here were created by the Planetary Sciences and Remote Sensing group at Freie Universität Berlin. The systematic processing of the HRSC image data was carried out at the DLR Institute of Planetary Research in Berlin-Adlershof. 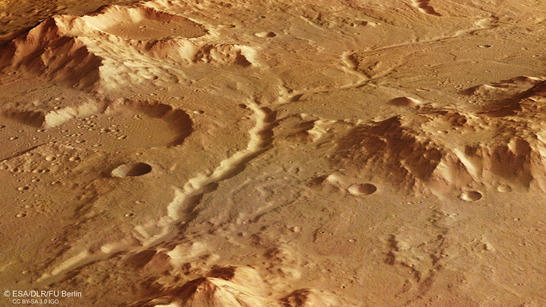 Libya Montes is a highland area at the Martian equator, south of the 1200 km Isidis impact basin. The Libya Montes highlands are one of the oldest regions on Mars which have been modified by fluvial activity (see also 2006 Libya Montes press release). Numerous valleys and dense valley networks in this region indicate extensive rainfall, surface runoff and erosion in the Martian past.

The more longitudinal shaped valleys, like the one in the center of the image, were carved by flowing water and later modified by groundwater-induced processes. The pictured valley originates from an impact crater in the South, and discharges to the North. The course of the stream is characterized by abrupt changes in direction that indicate the influence of local topography and maybe tectonics. Evaluations of impact crater size-frequency distributions, a method in planetary sciences to estimate the age of a solid planetary surface, reveal that valley incision took place about 3.6 Ga ago.

The mineralogy in the Libya Montes region is very diverse. Various aqueously-formed and chemically altered minerals testify past hydrothermal activity in context with the formation of the Isidis impact basin and fluvial activity. As a result, basaltic mountain material was altered to phyllosilicates which were detected from Mars orbit by spectrometer instruments.

The images were acquired by the HRSC (High Resolution Stereo Camera) on 21 February 2017 during Mars Express Orbit 16647. The ground resolution is approximately 15 meters per pixel and the images are centered at 90° East and 1° North. The color image was created using data from the nadir channel, the field of view which is aligned perpendicular to the surface of Mars, and the color channels of the HRSC. The oblique perspective view was generated using data from the HRSC stereo channels. The anaglyph, which provides a three-dimensional view of the landscape when viewed using red-green or red-blue glasses, was derived from data acquired by the nadir channel and one stereo channel. The color-coded topographic view is based on a digital terrain model (DTM) of the region, from which the topography of the landscape can be derived. The reference body for the HRSC-DTM is a Mars sphere.

To download released raw images and DTMs of the region in GIS-ready formats, follow this link to the mapserver