Chaos and water on Mars

Chaotic terrain and remarkably light-toned deposits within an impact crater in the southern highlands of Mars can be observed in recent images taken by the High Resolution Stereo Camera (HRSC) on board ESA’s Mars Express spacecraft. Remnants of valley networks in the surroundings indicate precipitation and water transport in the Martian past. The views shown here were created by the Planetary Sciences and Remote Sensing group at Freie Universität Berlin. The systematic processing of the HRSC image data was carried out at the DLR Institute of Planetary Research in Berlin-Adlershof. 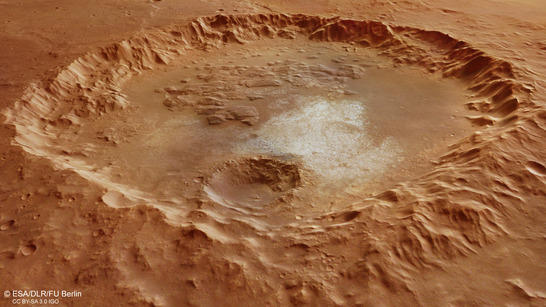 The interior morphology of impact craters on Mars is diverse and can comprise, e.g., deposits of sediments and landslides, dunes, deltas, ejecta, and many others. An abundance of different materials are found within the pictured complex impact crater in the Margaritifer Terra region on Mars: This crater with a diameter of about 70 km, a flat floor and a degraded rim contains slump deposits near the inner crater wall, smooth plains material in its northwestern part, blocky textured chaotic material in its southern part, and in particular some striking light-toned deposits. 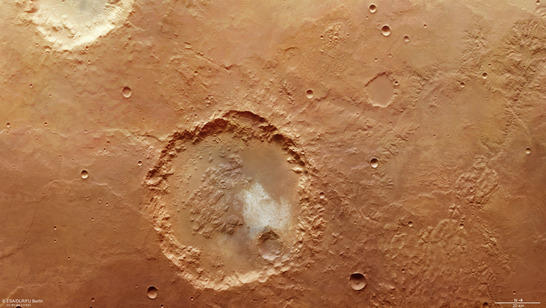 The light-toned deposits on the crater floor are especially obvious not only in HRSC data, but also in THEMIS nighttime data. The Thermal Emission Imaging System THEMIS is an instrument on board the NASA Mars Odyssey spacecraft which orbits Mars since 2001. A “bright” appearance of rocks in THEMIS nighttime data means a higher temperature compared to the surrounding material. This fact indicates exposures of bedrock, because at night bedrock can retain the heat accumulated during the day better compared to loose material and dust that cool off quickly. 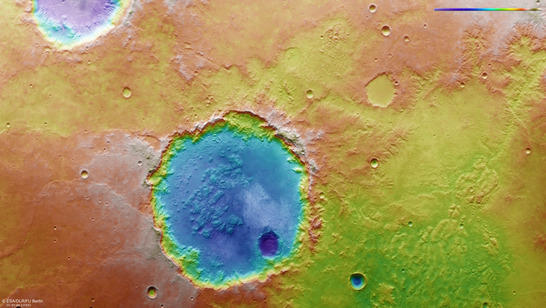 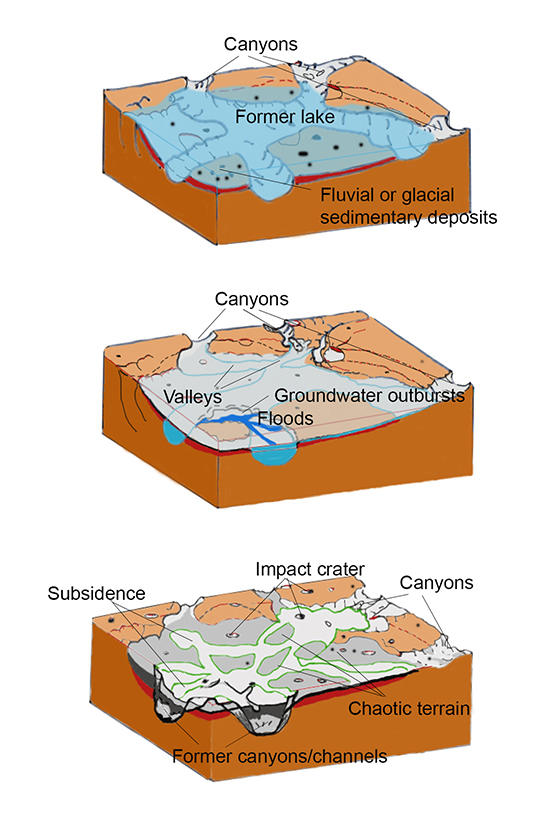 The chaotic terrain on the crater floor characterized by plateaus, buttes and knobs, separated by troughs, is also found to the north of the crater (right section of the image) in a region termed Erythraeum Chaos which is assumed to be the relict of a paleolake. Sediments on the floor of Erythraeum Chaos could have been emplaced by the Parana Valles valley network located further to the east. The Parana Valles form together with the Loire Valles in the northwestern (upper right) edge of the image one of the largest and best-integrated valley systems on Mars. Chaotic terrain and valley networks still visible on the surface today are indicators of water transport, storage, and release in the past. 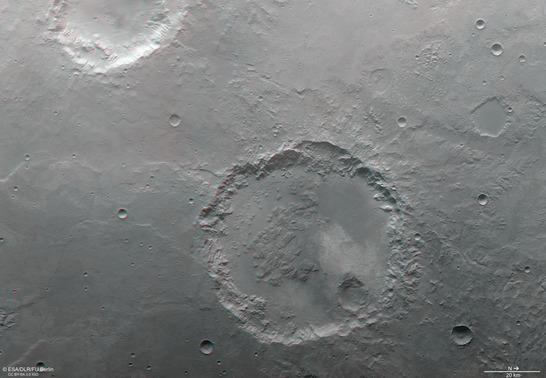 The image mosaic is composed of Mars Express HRSC (High Resolution Stereo Camera) orbit 16648 from 22 February 2017 with a ground resolution of 15 meters per pixel and orbit 4090 from 13 March 2007 with a ground resolution of 17 meters per pixel. The images are centered at 346° East and 23° South. The color image was created using data from the nadir channel, the field of view which is aligned perpendicular to the surface of Mars, and the color channels of the HRSC. The oblique perspective view was generated using data from the HRSC stereo channels. The anaglyph, which provides a three-dimensional view of the landscape when viewed using red-green or red-blue glasses, was derived from data acquired by the nadir channel and one stereo channel. The color-coded topographic view is based on a digital terrain model (DTM) of the region, from which the topography of the landscape can be derived. The reference body for the HRSC-DTM is a Mars sphere.