These images of a Martian landscape, acquired by the High Resolution Stereo Camera (HRSC) on board ESA’s Mars Express spacecraft, show an unnamed impact crater with a dune field, situated in the southern highlands of Mars. The HRSC was developed and is operated by the German Aerospace Center (Deutsches Zentrum für Luft- und Raumfahrt; DLR). The systematic processing of the HRSC image data was carried out at the Institute of Planetary Research at DLR and the views shown here were created by the Planetary Sciences and Remote Sensing group at Freie Universität Berlin. 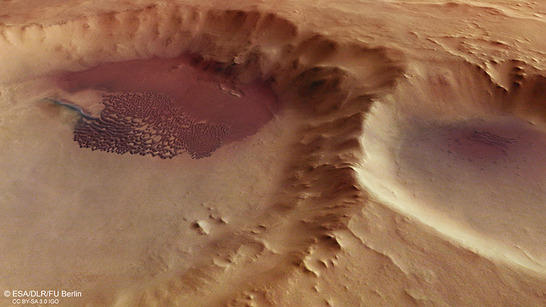 Dunes are prominent indicators of wind-driven (aeolian) activity on Mars. The dune field in this pictured, unnamed impact crater in the southern highlands of Mars includes sickle-shaped dunes (barchans) and parallel ridges of dunes (transverse dunes) in the eastern part of the dune field, as well as a smoothly distributed sand sheet in the western part. Barchans and barchanoid dunes represent the most common dune type found on Mars. To the south of the dune field (left in images) an elongated single transverse dune extends beyond the main field. This unusual feature with a length of several kilometers is additionally emphasized by its differing color compared to the main field. 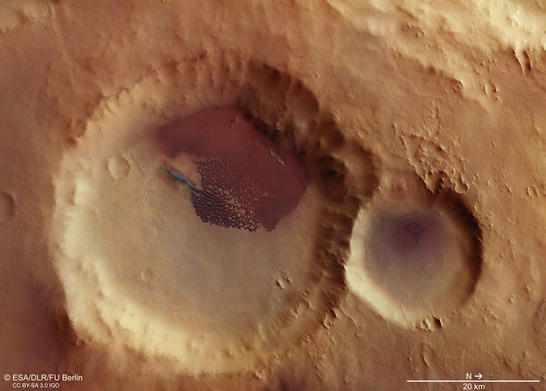 In general, depressions like impact craters can act as sediment traps into which the sandy material is blown by wind to accumulate on the floor. The 48-km-diameter impact crater with the dune field inside is situated south of Tharsis, the largest volcanic province on Mars. Past volcanic activity in Tharsis produced large amounts of basalt, fine pyroclastic deposits and ash, which constitute a likely source of the dark dunes. 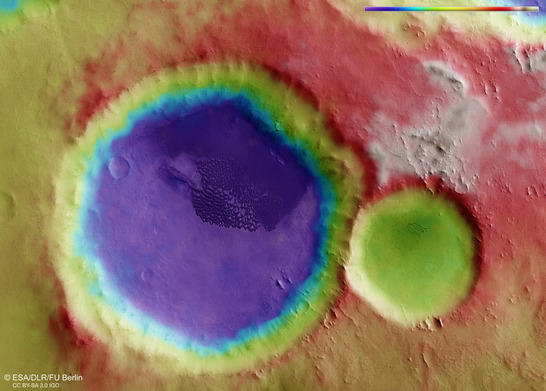 From the location of the dune field relative to the crater center and the orientation of individual dunes, a south-eastern wind direction at the time of dune formation can be estimated. Also the nearby impact craters Ross and Lamont as well as several smaller craters in the surrounding area show a north-west shift of their corresponding dune fields relative to the crater center, arguing for a uniform wind direction from south-east. 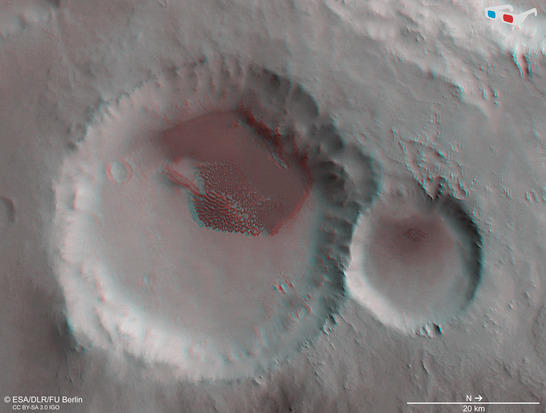 Forty-eight kilometres wide, the impact crater is not far from the volcano Aonia Tholus. Earlier volcanic activity on Mars produced immense quantities of fine-grained ash that formed immense layers and was then concealed beneath other rocky material. Impact craters cut through these dark layers, making them the probable source of the dark dunes. Five large volcanic provinces – including the vast Tharsis region – and countless small, scattered volcanoes have produced a virtually global distribution of the ash layers, meaning that this kind of dark dune is found almost everywhere on Mars. 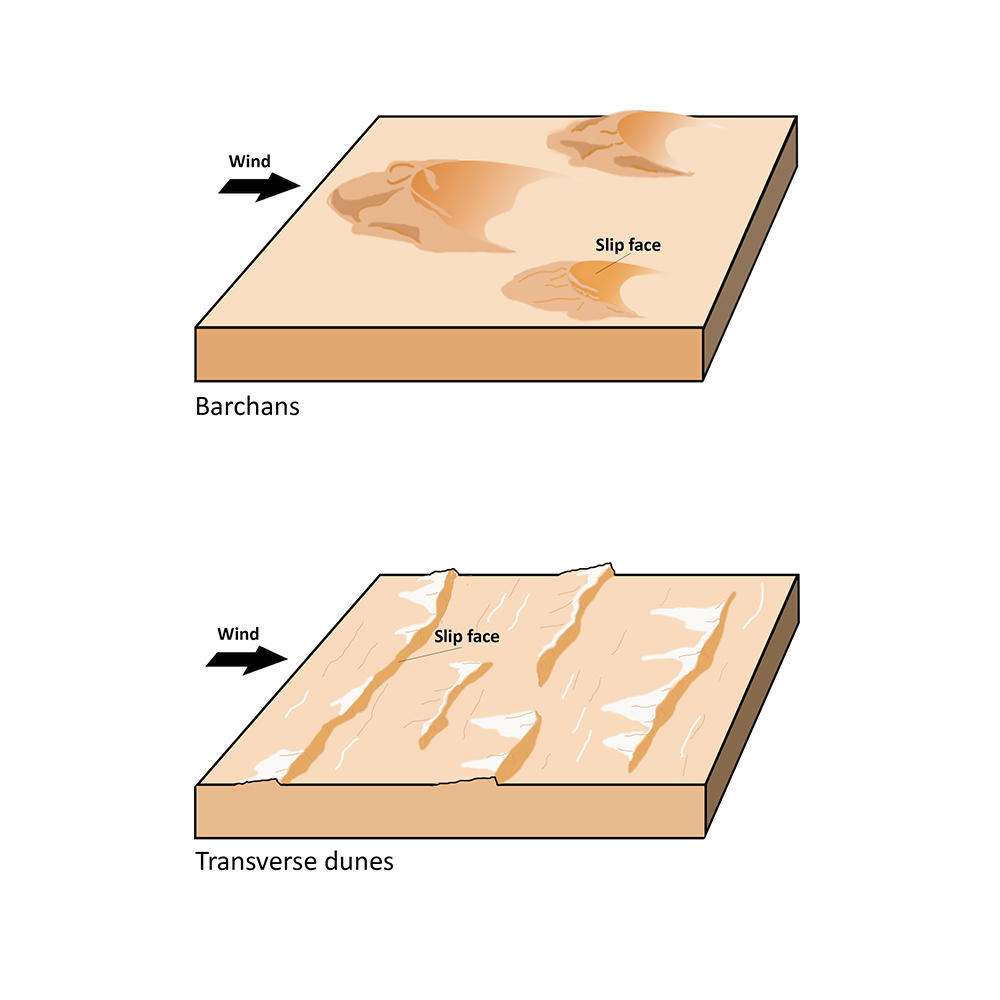 The images were acquired by the HRSC (High Resolution Stereo Camera) on 16 May 2017 during Mars Express Orbit 16934. The ground resolution is approximately 13 meters per pixel and the images are centered at 248° East and 59° South. The color image was created using data from the nadir channel, the field of view which is aligned perpendicular to the surface of Mars, and the color channels of the HRSC. The oblique perspective view was generated using data from the HRSC stereo channels. The anaglyph, which provides a three-dimensional view of the landscape when viewed using red-green or red-blue glasses, was derived from data acquired by the nadir channel and one stereo channel. The color-coded topographic view is based on a digital terrain model (DTM) of the region, from which the topography of the landscape can be derived. The reference body for the HRSC-DTM is a Mars equipotential surface (Areoid).