Chaos in the Atlantis basin

This animation features the region of Atlantis Chaos on our neighbor planet Mars. It is based on a color mosaic and digital terrain model of this region from the press release from June 12th, 2014. The images were acquired by the High Resolution Stereo Camera (HRSC) on board ESA's Mars Express spacecraft. The camera is operated by the German Aerospace Center (Deutsches Zentrum für Luft- und Raumfahrt; DLR). The animation was created by the Planetary Sciences and Remote Sensing group at Freie Universität Berlin. Systematic processing of HRSC image data is carried out at DLR Institute of Planetary Research Berlin-Adlershof. 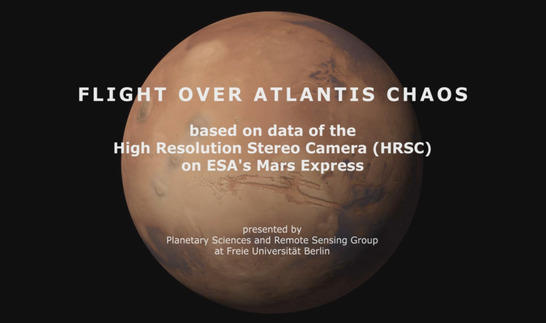 A myriad of terrain types are found across the Terra Sirenum region in the southern highlands of Mars. Within the Atlantis basin, a complex and rugged landscape spread across roughly 200 kilometres known as Atlantis Chaos. The Atlantis basin likely owes its existence to an asteroid impact that took place in the early history of Mars. Now, the circular profile of what could be the crater rim is barely detectable. There are several other large basins in Terra Sirenum – most likely created by asteroid impacts as well. Many scientists suspect that standing water once filled these partially connected crater depressions – the hypothetical Eridania lake, which may have covered an area of over one million square kilometres.

This movie is generated from an image mosaic, composed of 4 single HRSC images (orbits Orbits 6393, 6411, 6547 (2008/2009) und 12.724 (2014) with an average ground resolution of 15 meters per pixel. The image center lies at approximately 34° southern latitude and 183° eastern longitude. The mosaic image was combined with topography information (from stereo data of HRSC) to generate a three-dimensional landscape. Finally this landscape is recorded from different perspectives, as with a movie camera, to render a flight.

To download the raw images and dtms in GIS-ready formats, follow this link to Atlantis Chaos on the mapserver.