This animation features Becquerel crater on our neighbor planet Mars. It is based on a color mosaic and digital terrain model of Becquerel from the press release from Sep 5, 2013. The images were acquired by the High Resolution Stereo Camera (HRSC) on board ESA's Mars Express spacecraft. The camera is operated by the German Aerospace Center (Deutsches Zentrum für Luft- und Raumfahrt; DLR. The animation was created by the Planetary Sciences and Remote Sensing group at Freie Universität Berlin. Systematic processing of HRSC image data is carried out at DLR Institute of Planetary Research Berlin-Adlershof. 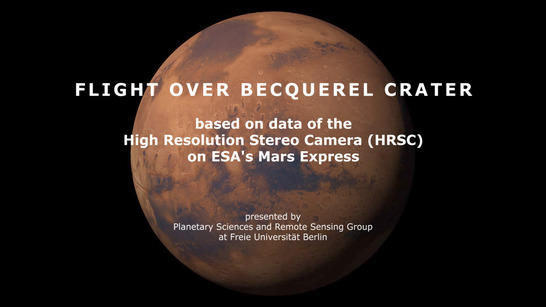 Becquerel is situated in the northern hemisphere of Mars in Arabia Terra, a region that is 3.5 billion years old and has many impact craters. On the floor of Becquerel crater sediments build a pile of nearly 1000 meters. Hyperspectral imagery from the CRISM instrument on NASA´s Mars Reconnaissance orbiter show, that the light-toned deposits in this region are composed of sulfate-bearing rocks, partly containing water. On Earth, the formation of most sulfates (for example gypsum) results from the evaporation of water. The common occurrences of these deposits in Arabia Terra point to a large-scale process responsible for the formation of the layered deposits. Presumably, the sediments were created by the interaction of wind-blown sediments and/or volcanic ashes and upwelling groundwater in low lying areas such as crater floors.

This movie is generated from an image mosaic, composed of 4 single HRSC images (orbits 3253_1, 5368, 5350, 5332) with an average ground resolution of 17 meters per pixel. The image center lies at approximately 22° northern latitude and 352° eastern longitude. The mosaic image was combined with topography information (from stereo data of HRSC) to generate a three-dimensional landscape. Finally this landscape is recorded from different perspectives, as with a movie camera, to render a flight.

To download the raw images and dtms in GIS-ready formats, follow this link to Becquerel crater on the mapserver.