The images presented in this mosaic and acquired with the High Resolution Stereo Camera operated by the German Aerospace Center (Deutsches Zentrum für Luft- und Raumfahrt; DLR) on board ESA's Mars Express spacecraft show Becquerel Crater. Inside it, a mountain almost 1000 metres high consisting of layers of sulphurous deposits, is evidence of the eventful climatic history of the Red Planet. The crater is 167 kilometres in diameter, almost 4000 metres deep and is located in the Arabia Terra region, which marks the transition from the Martian highlands to the northern lowland. The images shown here were created by the Planetary Sciences and Remote Sensing group at Freie Universität Berlin. The systematic processing of the HRSC image data is carried out at DLR. 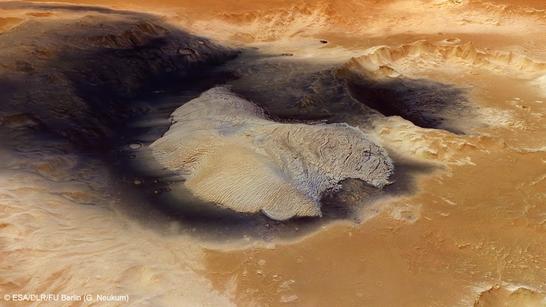 The crater was named after French physicist Antoine Henry Becquerel (1852-1908), who, together with Marie and Pierre Curie, was awarded the Nobel Prize in 1903 for the discovery of radioactivity, and after whom the physical unit for radioactivity is named.

Unusual sedimentary structures – bright, layered deposits – cover the surface of Becquerel Crater. Similar deposits are present in Gale Crater, where NASA's Curiosity rover landed on 6 August 2012. Research has shown that the bright deposits in this region consist of sulphurous rock that is hydrated in places. Sulphates are sulphuric acid salts such as gypsum and, on Earth, are formed when water evaporates. In Becquerel Crater, these sedimentary stacks have formed a mountain almost 1000 metres high, with gently inclined slopes and a flat summit.

Tracking down the processes that generate sulphate deposits

The relative frequency with which the sulphates are present in the Arabia Terra region indicate that a large-scale process is responsible for their creation. It is thought that these sediments have been formed by an interaction of emerging ground water in low-lying regions (impact craters, for example) and dust transported by the wind, possibly in conjunction with ash deposits. The sequence of layers can thus be traced back to seasonal climate fluctuations or changes in the Martian climate over greater periods, caused by the periodic variation of the planet's rotational axis. This and other theories have been intensely debated by experts, as there is still no substantive argument or information from the ground to offer a conclusive answer. The Curiosity rover, in its investigation of Gale Crater, might provide important knowledge in this regard.

Wind eroded the sediments over time

The layering within the bright sedimentary mountain is clearly visible in images 1 and 4. It is thought that the entire floor of the crater was once covered with these deposits. Sulphurous rocks are relatively susceptible to weathering; consequently, over the course of perhaps more than three billion years, a large part of the layered sediments has been stripped away by the force of the wind, leaving behind an abraded and rounded mountain.

The dark areas in the images are areas covered with a layer of basaltic sands, which probably originated from volcanic ashes and form imposing dune fields in various places on Mars.

In recent years, ESA's Mars Express spacecraft has flown over this region on numerous occasions. This mosaic is composed of 4 single HRSC images (orbits 3253_1, 5368, 5350, 5332) with an average ground resolution of 17 meters per pixel. The image center lies at approximately 22° northern latitude and 352° eastern longitude. The colour image (2) was captured using the nadir channel, which is directed vertically down onto the surface of Mars, and the colour channels of the HRSC; the perspective oblique views (1) were computed from data acquired by the HRSC stereo channels. The anaglyph image (4), which creates a three-dimensional impression of the landscape when viewed with red/blue or red/green glasses, was derived from the nadir channel and one stereo channel. The aerial view, encoded in rainbow colours (3), is based on a digital terrain model of the region, from which the topography of the landscape can be derived.