The German Environmental Specimen Bank (ESB) is an important part of the environmental observation program in Germany. Routine operation of the German ESB started in 1985. Environmental specimens are collected on a yearly basis from representative marine, freshwater and terrestrial ecosystems. After biometric characterization plant and animal specimens are pooled and homogenized. Moreover, the abiotic materials soil and freshwater suspended particulate matter are sampled. All samples are stored in a long-term ESB archive operated at temperatures below -150°C. More than two decades after establishment the ESB now embodies a historical record of the state of the environment in Germany during this period. It allows to follow retrospectively temporal trends of chemicals in the environment and to compare spatial loads. Pollutants to be investigated are those which had not yet been recognized as hazardous when specimens were archived (emerging pollutants) or which could not be analysed appropriately in the past due to limitations of analytical methodology. Recent retrospective monitoring studies revealed that the ESB is an effective tool for environmental policy by proving the effectiveness of bans of certain pollutants like organotin compounds, DDT and lead fuel additives. Studies on ingredients of personal care products in freshwater fish or on organotin compounds in marine biota showed that body burdens are correlating with consumption patterns.
Within the frame work of the ESB the FUB collects SPM and sediment cores since 2002 at actually 16 sapling locations and realises additional scientific research projects to endorse the ESB. 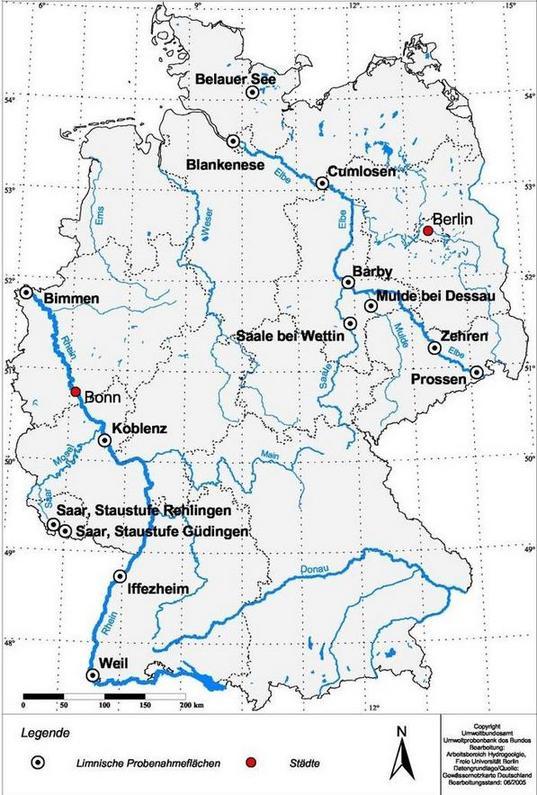