South China's Yangtze Platform is one of the forerunners among popular and promising regions to investigate the events leading up to and including the Precambrian-Cambrian boundary because its strata are thick, only moderately deformed, cover an extensive area, span a variety of facies and lithologies, and are mostly readily accessible. 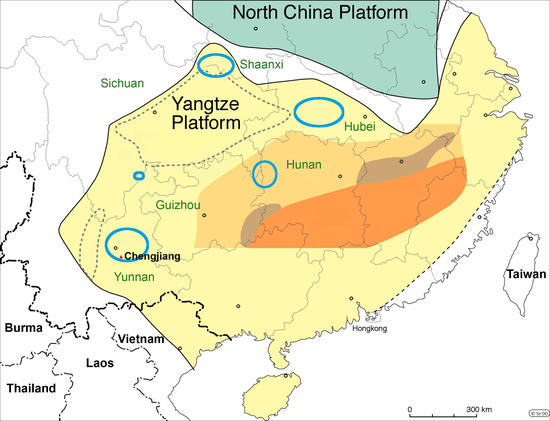 Research activities of FOR 736 during the first funding period concentrated on the Yangtze Platform which largely was a stable shallow-marine platform during the Ediacaran and the Cambrian. A growing number of geochemical, sedimentary and stratigraphic studies, however, indicate that many of the  shallow-water environments, in particular near the classical Three-Gorges region, represent partially restricted, possibly "shelf-lagoonal" settings so that geochemical profiles may not all (and not entirely) reflect mean global seawater composition.

In order to validate our data from South China, FG teams have begun to also work in the Karatau Mountains of southern Kazakhstan. These apparently also had a low-latitude but (in contrast to parts of the Yangtze Platform) apparently open-marine position during the Ediacaran and Cambrian. We are currently (2012) evaluating our data; watch this site for forthcoming publications !