The iMars project focuses on developing a user platform for Mars surface science, consisting of a consistent set of data products of Mars from the 1970s to the present day. The concept aims to generate a webGIS using imaging data from NASA and ESA missions; including specific tools for producing, exploring and analyzing data products for studies of surface changes over time.

Planetary surface science has seen a dramatic increase in both quality and quantity of observations over the last decades, especially in 3D imaging. The EU funded iMars-project has started in 2014 and aims to generate an automated processing system which allows to study this large volume of multi-type observation data from different epochs. It is anticipated that the entire NASA and ESA record of Martian orbital image data will be collected within a single environment for handling, visualisation and subsequent analyses. Such analyses will be conducted automatically using change-detection algorithms or interactively using the citizen-science concept implemented at Zooniverse.

Close user interaction plays a paramount role within iMars which requires sophisticated concepts for data handling and communication. This interactive data hub will be realised through open-source webGIS implementations and by providing webGIS services to the user community using established OGC-protocols. 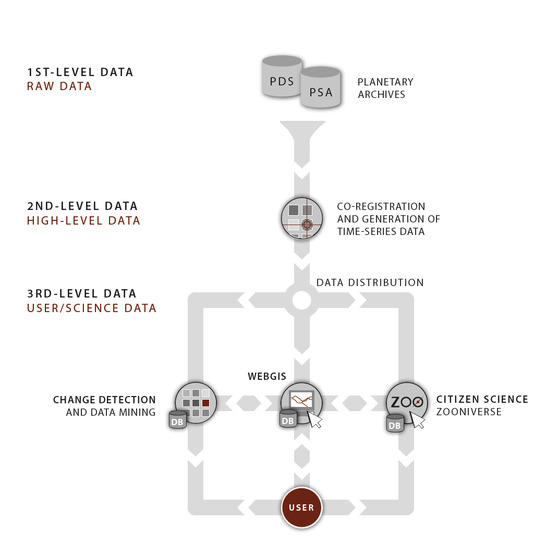 For planetary data only a few web-based GIS have been implemented during the last decade and even fewer can be considered as being established in and accepted by the user community. Most web-based services today are either archive systems as realised in the Planetary Data System (PDS) and the Planetary Science Archive (PSA) nodes. Web-based services are map-focussed systems targeted at visualisation rather than ancillary data and metadata access (e.g., Google Mars).

The developing of iMars-webGIS includes the combination of co-registered, terrain-corrected and multi-temporal Martian imaging data and specific higher-level tools within a single map-focused information system. This platform will allow to navigate data intuitively and conveniently; to discover what and where surface changes have occurred since the mid-1970s.