Southeast of Pickering Crater – complex history in one shot

» read more below the gallery 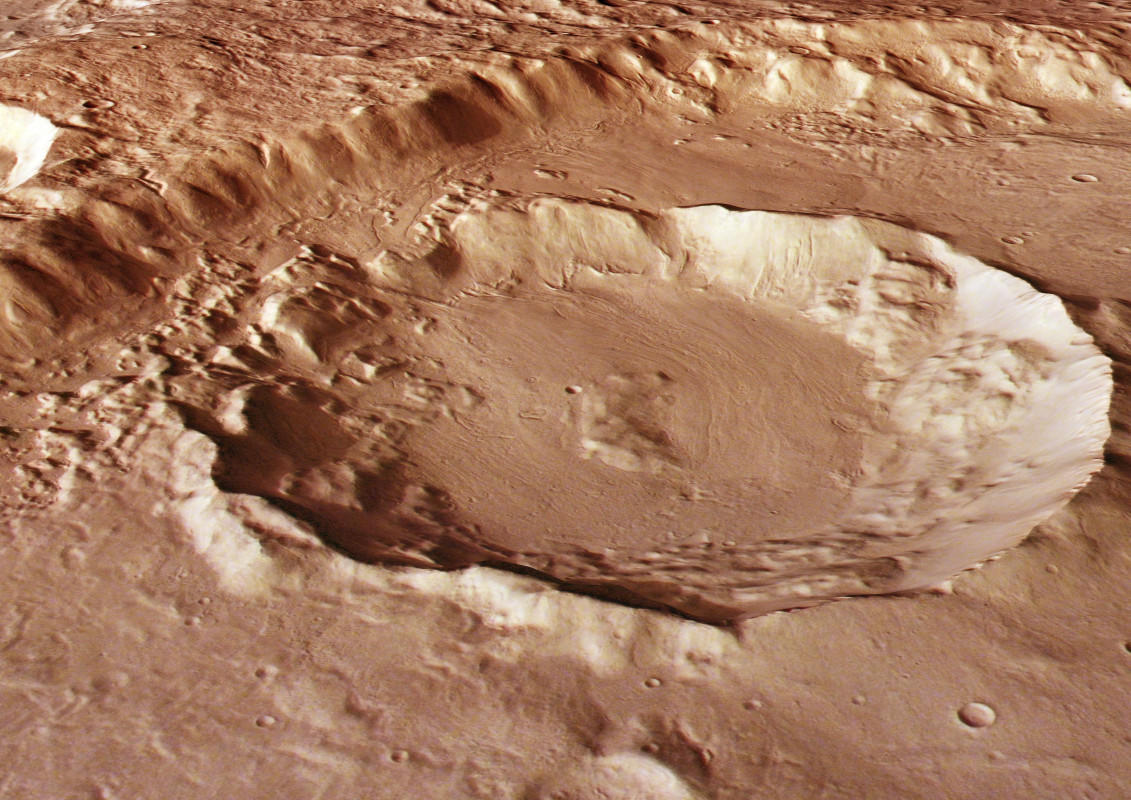 » read more about the diverse region

The region presented in this HRSC observation is located in Terra Sirenum at the border to Daedalia Planum. A wide morphologic diversity created by multiple processes can be observed within one picture. The points of interest are marked in the annotated image. At the left side of the image, a large valley with a width of up to 1.8 km can be spotted. It could have transported meltwaters into the adjacent basin. Stretching in the same southwest-northeast direction and cutting through the basin, a large fracture can be observed, located just 10 km north of the valley. These large channel-like fractures are called Graben and are created in regions of extensional tectonic stress where the bedrock is faulted and pulled apart. At the surface, linear sections drop downward along paired, parallel faults. These graben features show the same orientation like the Icaria Fossae, located southeast (see overview map).

The large, image filling, ancient impact crater measures about 70 km in diameter and partly shows a dark-toned region, possibly caused by dark wind-blown sands. The floor of the crater is very flat and shows an interesting wind eroded surface in the eastern (lower) part. These erosional features are called Yardangs. A smaller impact crater, measuring up to 20 km in diameter is located in the northern (right) part of the large crater. It shows an interesting ejecta layer that could indicate an impact into a water/ice bearing surface. Inside the smaller crater and also in close vicinity to the north and also in small craters around, a smooth-looking material is observed, displaying a surface morphology resembling terrestrial ice/debris glaciers (marked with “lobate crater fill” and “filled crater” in the annotated image). Theses flow structures are formed when a mixture of debris and ice from a glacier flows downhill and the debris then trace the movements of the plastic ice flow.

A very different appearance is shown by the next ancient impact crater further to the north and marked as “lava filled crater” in the annotated image. Here, the morphology rather suggests a lava infill or cover of the impact crater floor. Also, none of the periglacial features present in the large crater can be found. Neighboring further north, a large field of dendritic valleys can be found. These valleys are believed to have formed relatively early in Martian history by atmospheric precipitation (rain or snow).

Finally, a large lava field is located in the lower right section of the image. Here, wrinkle ridges can be found. These features are created when tectonic forces compress a lava sheet that is still soft and elastic. The steeper side of the wrinkle ridges mark the front of the ridge where the material buckled up and over the subsequent lava sheet. All these different landforms demonstrate the complex history and evolution of Mars within a single image.

The images were acquired by the HRSC (High Resolution Stereo Camera) on  5 April 2022 during Mars Express Orbit 23067. The ground resolution is approximately 15 meters per pixel and the images are centered at about 232° East and 38° South. The color image was created using data from the nadir channel, the field of view which is aligned perpendicular to the surface of Mars, and the color channels of the HRSC. The anaglyph image, which creates a three-dimensional impression of the landscape when viewed with red/blue or red/green glasses, was derived from the nadir channel and one stereo channel. The oblique perspective view was generated from the digital terrain model, the nadir and color channels of HRSC. The color-coded topographic view is based on a digital terrain model (DTM) of the region, from which the topography of the landscape can be derived. The reference body for the HRSC-DTM is a Mars equipotential surface (Areoid).

HRSC is a camera experiment that was developed and is operated by the German Aerospace Center (Deutsches Zentrum für Luft- und Raumfahrt; DLR).The systematic processing of the camera data took place at the DLR Institute for Planetary Research in Berlin-Adlershof. The working group of Planetary Science and Remote Sensing at Freie Universität Berlin used the data to create the image products shown here.