New images of the Martian moons Phobos and Deimos

Mars Express is currently the only satellite exploring Mars from an elliptical orbit. This allows regular, close flybys of Phobos, the larger of the two Martian moons. In summer 2017, the High Resolution Stereo Camera (HRSC) observed the moon from a distance of approximately 115 kilometres. Besides, the more distant Martian moon Deimos could be observed at the beginning of 2018. The HRSC, developed and operated by the German Aerospace Center (Deutsches Zentrum für Luft- und Raumfahrt; DLR), acquired images of Phobos at a resolution of up to four metres per pixel. During the ESA Mars Express mission, which has been operating for more than 14 years, Phobos has already been observed several times from distances of less than 150 kilometres. 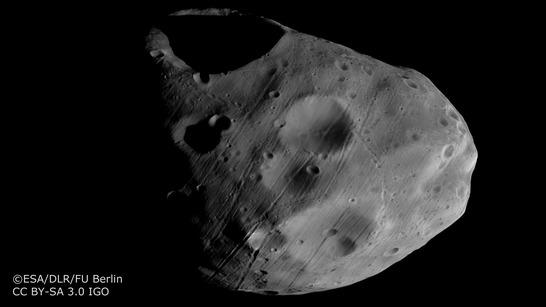 A prerequisite for such spectacular images from space is a very accurate knowledge of the position of Phobos on its orbit around Mars. As the spacecraft passes the object at approximately three kilometres per second, it only has a few seconds to observe the irregularly-shaped body, which has a maximum diameter of just 26 kilometres. Since the start of the mission in 2003, measurements of the positions of the Martian moons in relation to the stars have repeatedly been obtained by examining images acquired by the Super Resolution Channel (SRC), which is part of the HRSC and has four times the resolution delivered by the main HRSC channels (Image 2). These are used to continuously determine the positions of the Martian satellites and improve position forecasting. 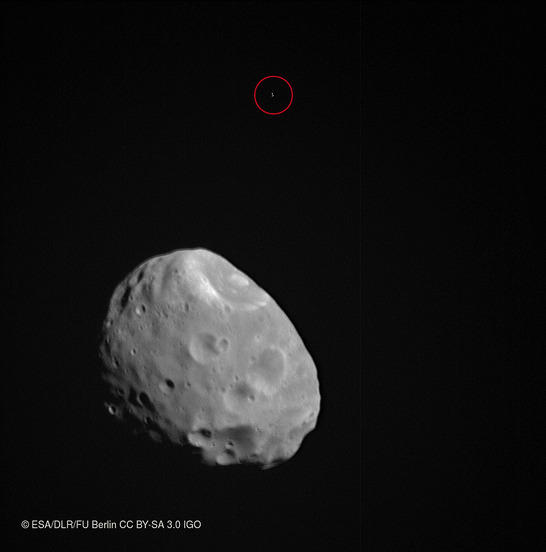 The methods for calculating positional data have continuously improved during the course of the Mars Express mission as a result of on-going development. At first, only simple models of the body were used, known as triaxial ellipsoids. Unlike on Earth, for example, the equator of such bodies is not described by a circle with radius a, but with an ellipse with radii a and b, in addition to the smallest radius c along the polar axis. Such a triaxle ellipsoid allows the position of Phobos to be determined to within around one to two kilometres in the images. We can now use accurate surface shape models to simulate the anticipated position and appearance of Phobos in the images. The observations are therefore much more precise. However, the uncertainty in determining the position remains between 100 and 200 metres. 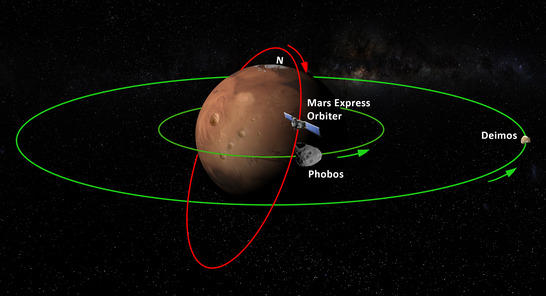 Last year, special images were analysed that show several Solar System bodies in one image. Phobos and Deimos were imaged together or individually, with Jupiter or Saturn (Image 3, Video) in the background. The two planets are located several hundred million to one billion kilometres away from Mars Express. From these observations, we can determine the position of a body in the Solar System in relation to other bodies, without the camera’s inevitable orientation errors affecting the result. We are also able to better determine the position of the two Martian moons. 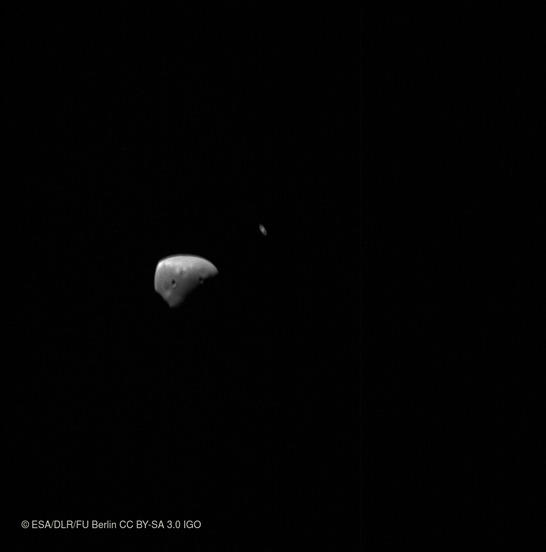 Image 3: Deimos and Saturn
Astrometric observation performed using the Super Resolution Channel (SRC) of the High Resolution Stereo Camera (HRSC). In the foreground is the only 6.2-kilometre Martian moon, Deimos; in the background, Saturn is visible, clearly recognisable by its rings. (Orbit 17,770, 15 January 2018)
Download high resolution

The above-mentioned surface shape models were obtained using HRSC image data from close flybys (Image 4). High-resolution images show the surface of Phobos at nine metres per pixel. The HRSC was specifically designed to provide data for the creation of digital surface models during one flyby. For Phobos, many flybys are necessary to be able to record the small satellite from all sides, so that gradually a reconstruction of the moon’s entire surface is possible. The images from summer 2017 provided scientists with another piece of the puzzle, enabling the surface shape models to be further refined. Such spatial models are of enormous help when answering scientific questions.

Image 4: Improvement of the surface shape model of Phobos
These slightly different images were acquired by five different channels of the High Resolution Stereo Camera (HRSC) during Orbit 17,342 on 12 September 2017 – the nadir channel (centre image), the two photometry channels (left and right of the centre image) and the stereo channels (on the far left and right). The fact that another area of the moon’s surface can be seen in every image at a slightly different viewing angle allows the model of its surface shape to be improved.
• Fullscreen, Pan and Zoom • Download high resolution

Martian moon Phobos a possible destination for a landing mission

It is still not entirely clear how the two Martian moons formed. There is discussion as to whether Phobos and Deimos, like Earth’s Moon, were created from the debris of a major impact in Mars’ early history, for example, and have been in orbit ever since. An alternative possibility is that they originate from another region of the Solar System (such as the asteroid belt) and have been captured by the planet’s gravity. Not least because of this question, Phobos is attracting attention as the destination of a future landing mission. The moon would also be an ideal location for a permanent ‘observation post’ to study the Martian surface, due to it being tidally locked (it always points the same part of its surface towards Mars, because its rotation period is equal to its orbital period around the planet). When selecting a landing site, the HRSC terrain models will be an important basis for decision-making.

Astrometric observation of Phobos and Saturn performed using the Super Resolution Channel (SRC) of the High Resolution Stereo Camera (HRSC)
The animation consists of 30 separate images acquired during Mars Express Orbit 16,346 on 26 November 2016. The slight up and down movement of Saturn and Phobos in these images is caused by oscillation of the spaceship orientation after completing the turn towards the moon.

For an overview of all press releases since 2004 click here.