Flight over Neukum Crater on Mars

In January 2018 an image mosaic of Neukum Crater on Mars was released by ESA, DLR and FU Berlin. Neukum Crater was named after the German planetary scientist Gerhard Neukum, who developed the High Resolution Stereo Camera (HRSC) which is in orbit around Mars on board Mars Express since 2003. Data acquired by the HRSC are presented here as animation of the impact crater “Neukum” created by the Planetary Sciences and Remote Sensing group at Freie Universität Berlin. HRSC operations and the systematic processing of the image data were carried out at DLR. 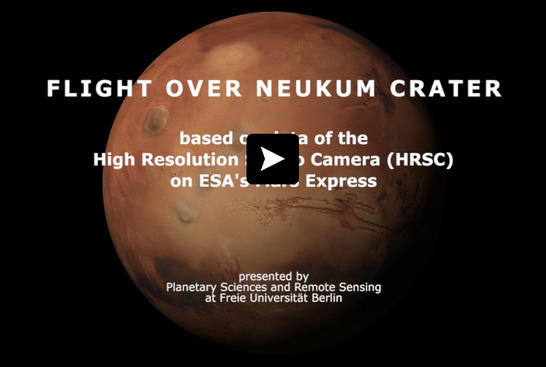 The 102-kilometer-diameter Neukum Impact Crater is located in the Noachis Terra region on Mars, in the densely cratered Southern Highlands and roughly 800 kilometers from the eastern rim of the large Hellas Planitia impact basin. This complex impact crater has a diverse geologic history, as indicated by various geomorphologic features on the crater rim and floor.

Over billions of years, the floor of Neukum Crater has been covered with sedimentary deposits, causing a flattening of the originally much deeper crater interior. The crater’s rim and ejecta deposits were heavily weathered by water, wind, and impact cratering. Further, glacial processes might have been active, as evident from observations of moraine-like features and landslides in smooth terrain along the crater wall.

Today, Neukum Crater stands out for a dark field of dunes and two prominent pits on the crater floor. Unlike dune fields on Earth, most of those on Mars are dark, as they consist of volcanic material. Within the dune field, the slipfaces are predominantly oriented towards the west, indicating that the prevailing wind direction is from the east. Also striking are light-colored deposits on the crater floor, to the west of the dune field.

The age of Neukum Crater can be estimated by the distribution analysis of crater sizes and crater frequencies on geologic mapping units. This is a special method in planetary sciences that was developed and communicated by Gerhard Neukum and colleagues since the 1970’s. Measurements of many small impact craters superposing the geologic units of Neukum Crater yielded a formation age of 3.5-3.7 billion years, as well as far younger ages up to only 66 million years, indicating overprint by various geologic processes.

The underlying HRSC mosaic consists of three orbit strips (2529, 4346, 4357) and covers a region 26°-31° East and 42°-47° South. The color mosaic was created using data from the nadir channel, the field of view of which is aligned perpendicular to the surface of Mars, and the color channels of the HRSC. The mosaic image is then combined with topography information from the stereo channels of HRSC to generate a three-dimensional landscape. Finally this landscape is recorded from different perspectives, as with a movie camera, to render a flight.