On 29th September 2017 the International Astronomical Union named an impact crater in the Southern Highlands of Mars after the German physicist and planetary scientist Gerhard Neukum, who died in 2014. Gerhard Neukum developed the High Resolution Stereo Camera (HRSC) and was Principal Investigator (PI) of the camera experiment until 2013. Data acquired by the HRSC on board Mars Express are presented here as an image mosaic of the impact crater “Neukum” created by the Planetary Sciences and Remote Sensing group at Freie Universität Berlin. HRSC operations and the systematic processing of the image data were done at DLR. 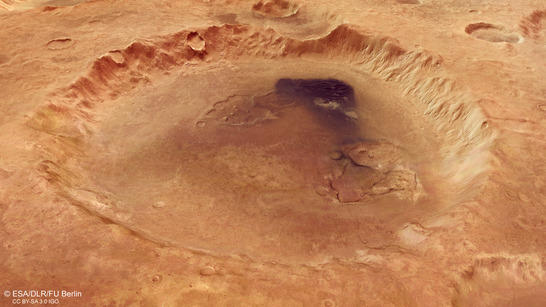 These recent HRSC images show the Neukum Impact Crater, which is located in the Noachis Terra region. This region lies in the densely cratered Martian southern highlands and is located roughly 800 kilometres from the eastern rim of the Hellas Planitia – the largest impact basin on Mars. Noachis Terra is known for its numerous dune fields, which have accumulated on the floor of large impact craters. 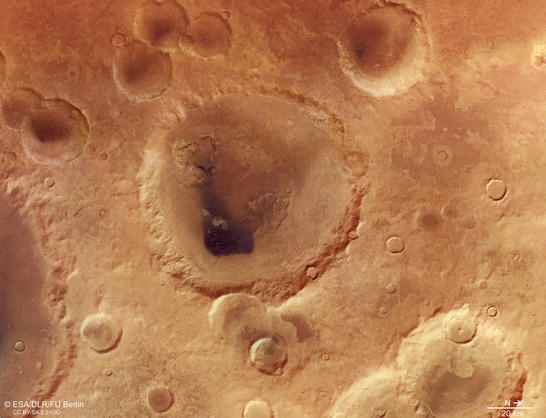 Neukum Crater stands out for its complex inner structure: the eye is immediately drawn to a large, dark field of dunes and two low depressions on the crater floor. Landslide deposits and possible glacial structures can also be seen on the inner crater rim. Despite having a diameter of over 100 kilometres, the crater is only around one and a half kilometres deep. The flat crater floor indicates that the crater has been repeatedly covered and filled with sedimentary deposits since its formation approximately four billion years ago. This is also confirmed by the age of the geological features within the crater, of which the most recent are only around 66 million years old. The crater’s rim and ejecta are heavily weathered, having been struck by countless meteorites over millions of years, as well as being subjected to water and wind, and thus increasingly eroded. 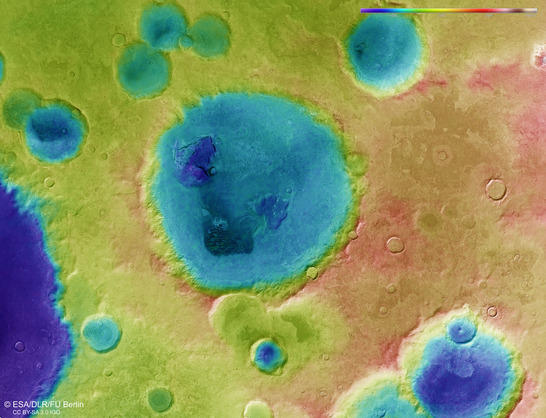 A dune field within the crater measures approximately 12 by 17 kilometres. Unlike dune fields on Earth, most of those on Mars are dark, as they consist of dark, volcanic material. The shape of the dunes is longitudinal and they are oriented vertically to the prevailing wind direction, and are known as transverse eolian ridges. Individual crescent-shaped dunes can mainly be seen on the northern edge of the dune field. These merge sideways into each other on the edges of this dark dune field. Within the dune field, the slipfaces are predominantly oriented towards the west, indicating that the prevailing wind direction is from the east. In addition, winds from the east and south have blown out the fine dark sand, which has then been deposited in thin sand sheets to the north and west of the dune field. A close inspection of the dune fronts reveals several small sand avalanches pointing down the slopes. These indicate that the dunes are still active and that their surfaces have not solidified. 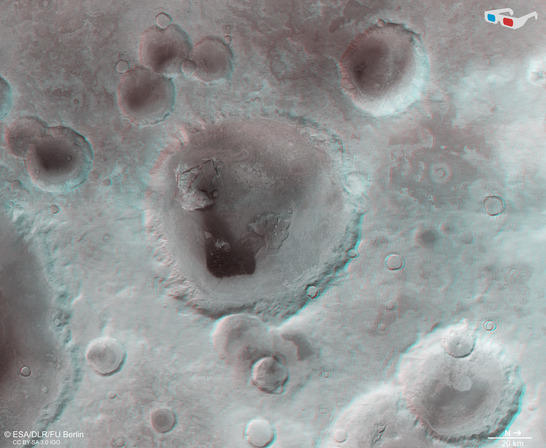 Also striking are the light-coloured deposits on the crater floor, to the west of the dune field. It is not yet clear how these deposits were formed. This may be rock material that is resistant to weathering and has been left exposed, or chemically solidified sediments. 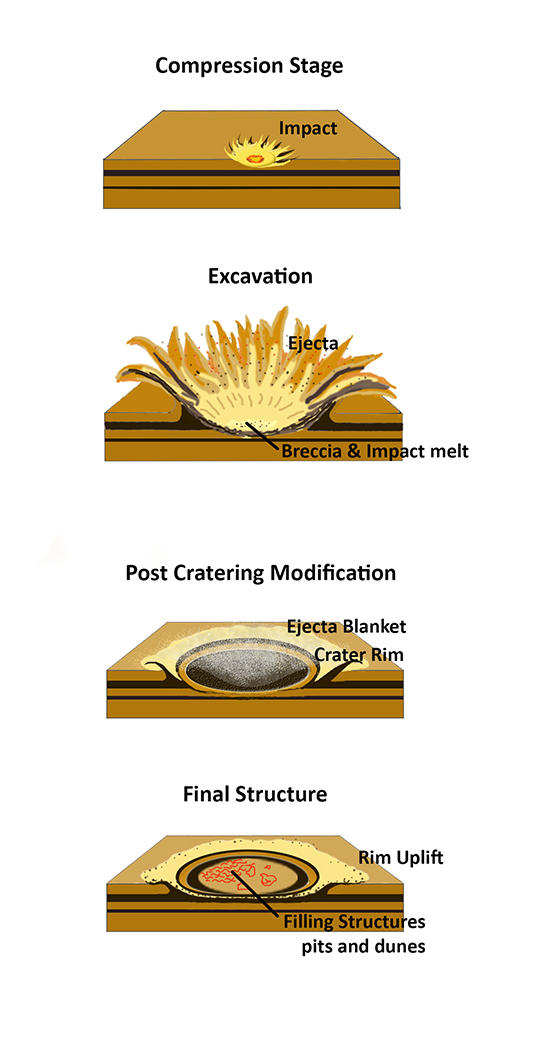 The mosaic consists of three orbit strips (2529, 4346, 4357) and covers a region 26°-31° East and 42°-47° South. The color mosaic was created using data from the nadir channel, the field of view of which is aligned perpendicular to the surface of Mars, and the color channels of the HRSC. The oblique perspective view was generated using data from the HRSC stereo channels. The color-coded topographic view is based on a digital terrain model of the region, from which the topography of the landscape can be derived. The reference body for the HRSC-DTM is a Mars equipotential surface (Areoid).