Images acquired at New Year’s Day 2018 using the High Resolution Stereo Camera (HRSC) on board the ESA Mars Express spacecraft show the collapsed depression Ismenia Patera which is interpreted to be either an impact crater or the caldera of a supervolcano on Mars. The views shown here were created by the Planetary Sciences and Remote Sensing group at Freie Universität Berlin. The systematic processing of the HRSC image data is carried out at DLR. 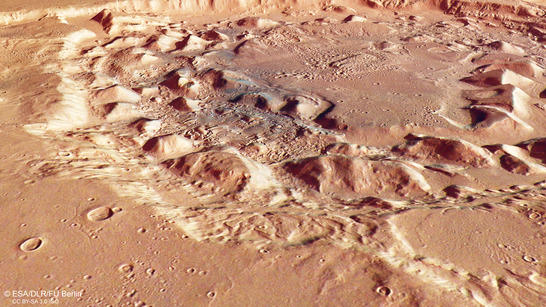 Ismenia Patera (latin: patera – flat bowl) is situated in the region Arabia Terra, at the transition of the northern lowlands and the southern highlands on Mars. Hills and blocks accumulate in a ring around the center of the 75 kilometer wide crater. On closer examination, gullies leading into the crater are visible in some places along its rim. The floor of the crater is covered by deposits, the surfaces of which display traces of previous ice flow. These patterns were probably produced by rock glaciers – ice flows whose surfaces transport large quantities of boulders and debris. Similar phenomena are present on Earth in the Alpine and Polar regions, where glacial ice is completely covered by debris that has slid onto the ice from the surrounding mountain slopes. This ice-debris mass moves slowly downslope, leaving behind such flow structures.

Conspicuous groups of small impact craters, for example in the centre of Ismenia Patera, were probably caused by another meteorite impact in the immediate vicinity, which ejected large boulders towards the centre of the crater, producing small craters.

There are different opinions to the formation of the crater: After one hypothesis it was created by a meteorite impact and later infilled by sedimentary deposits and ice. Finally the crater surface collapsed by the action of flowing and vaporizing water, leaving a fissured, hilly landscape. Another hypothesis claims that Ismenia Patera is a volcanic caldera (Spanish: caldera – kettle), a volcanic crater formed by the collapse of a magma chamber after a massive eruption. Volcanoes erupting a huge amount of material in a single eruption are termed supervolcanoes. Apart from Ismenia Patera, further candidates for supervolcanoes in Arabia Terra are Siloe Patera and Eden Patera. On Earth, volcanic structures such as the Phlegraean Fields near Naples, the Yellowstone area and Lake Taupo in New Zealand are considered to be supervolcanoes. On Mars, however, volcanic eruptions are no longer expected.

The theory of supervolcanoes in the ancient volcanic province in Arabia Terra is still a controversial topic for Mars researchers. In favour of the volcanic crater theory is the fact that the 'paterae' are irregularly-shaped collapse features with low topographic relief – partly without ejecta deposits elevated crater rim – which would be typical of impact craters. On the other hand, such an irregular shape may also be created by superimposed and subsequently altered impact craters. Future measurement methods for examining the Martian subsoil, to provide evidence for the existence of magma chambers below the paterae, for example, could shed light on this matter. These include seismic experiments, such as those on board NASA's InSight lander scheduled for launch on 5 May 2018, as well as orbiting radar experiments.

The images were acquired by the HRSC (High Resolution Stereo Camera) on 1st January 2018 during Mars Express Orbit 17723. The ground resolution is approximately 17 meters per pixel and the images are centered at about 2° East and 39° North. The color image was created using data from the nadir channel, the field of view which is aligned perpendicular to the surface of Mars, and the color channels of the HRSC. The oblique perspective view was generated using data from the HRSC stereo channels. The anaglyph, which provides a three-dimensional view of the landscape when viewed using red-green or red-blue glasses, was derived from data acquired by the nadir channel and one stereo channel. The color-coded topographic view is based on a digital terrain model (DTM) of the region, from which the topography of the landscape can be derived. The reference body for the HRSC-DTM is a Mars equipotential surface (Areoid).