Images taken by the High Resolution Stereo Camera (HRSC) on board ESA’s Mars Express spacecraft picture an ancient mountain region on Mars with a complex volcanotectonic, hydrologic, and periglacial history. The views shown here were created by the Planetary Sciences and Remote Sensing group at Freie Universität Berlin. The systematic processing of the HRSC image data was carried out at the DLR Institute of Planetary Research in Berlin-Adlershof. 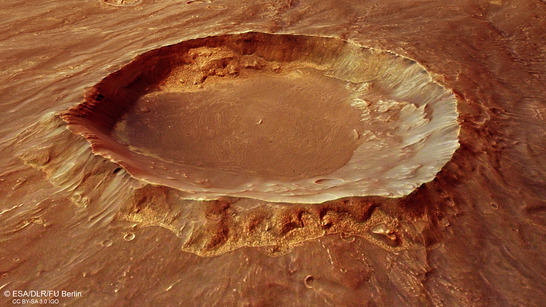 Traces of surface processes that took place billions of years ago can often be seen in the oldest regions of Mars. This is the case for the ancient highly fractured mountain range Thaumasia, which is characterized by tectonic graben, impact craters, fluvial valleys, and periglacial features. The Thaumasia Highlands are situated south of the huge Valles Marineris canyon on Mars and stand up as high as 4 km above the surrounding terrain. 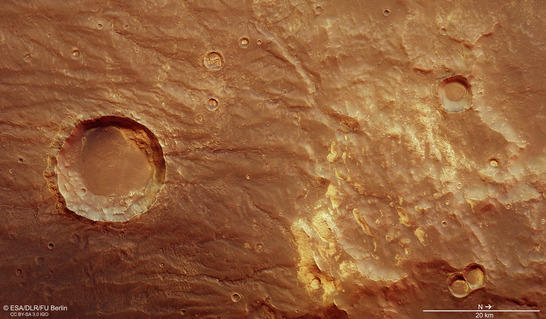 Numerous north-south-trending tectonic graben termed Coracis Fossae cut the eastern part of the old Thaumasia basement. These faults, visible in the left (southern) half of the color image, were generated more than 3.5 billion years ago by the interaction of stress fields from the nearby Tharsis volcanic province and Valles Marineris canyon system. Tectonic structures can control the migration of magma, water, and heat in the subsurface, influencing volcanic and hydrogeologic activity. There is evidence for fluvial valley formation by groundwater sapping and surface runoff at the same time when active tectonics shaped this landscape. Due to fluvial erosion, the graben have been buried and heavily modified. 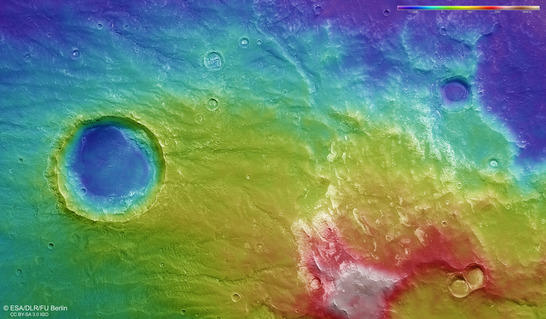 Light toned deposits, which might be phyllosilicates (clay minerals), stand out in the right (northern) part of the color image and at the rim of the large crater. Phyllosilicates on Mars are a hint to surface alteration by water, they can originate from hydrothermally (i.e. by water in combination with heat) altered basaltic mountain material. This kind of deposits was identified in spectral data in the near surrounding, e.g. within the impact crater Lampland. 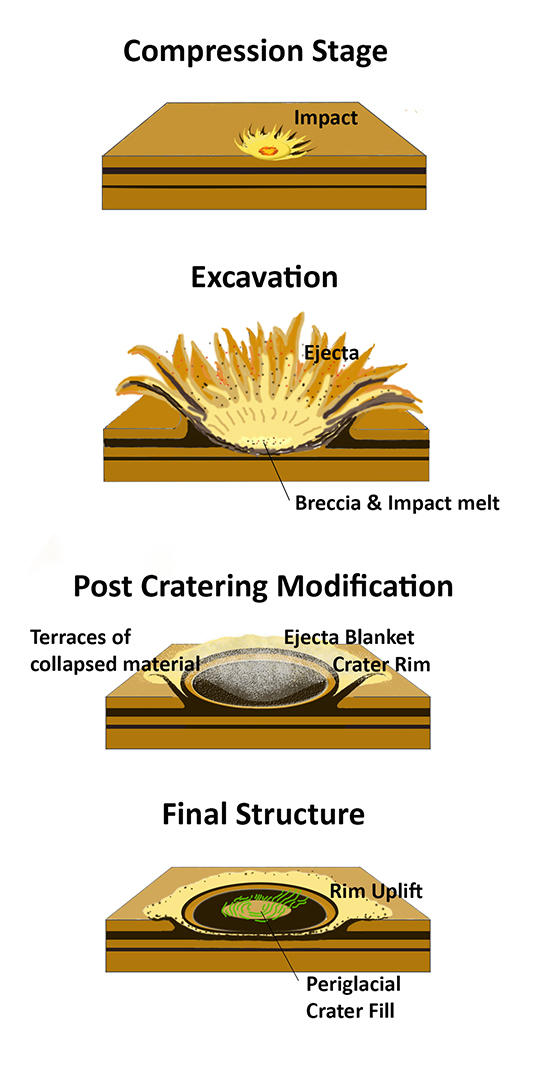 In the more recent past, the Coracis Fossae region has been modified by glacial processes – those associated with ice. Ice-rich material slid down the slopes and was deposited on the crater floor, as can be seen from the sinuous, sometimes circular structures within the crater, making it appear very smooth today. 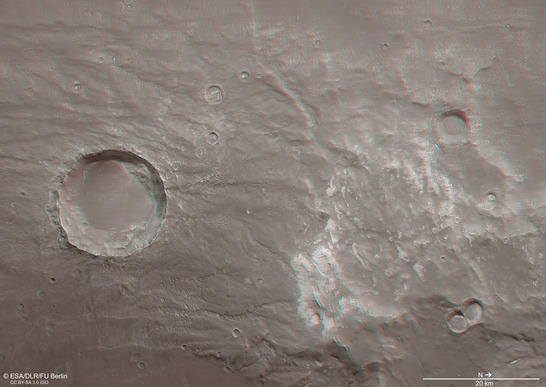 The images were acquired by the HRSC (High Resolution Stereo Camera) on 9 April 2017 during Mars Express Orbit 16807. The ground resolution is approximately 13 meters per pixel and the images are centered at 281° East and 31° South. The color image was created using data from the nadir channel, the field of view which is aligned perpendicular to the surface of Mars, and the color channels of the HRSC. The oblique perspective view was generated using data from the HRSC stereo channels. The anaglyph, which provides a three-dimensional view of the landscape when viewed using red-green or red-blue glasses, was derived from data acquired by the nadir channel and one stereo channel. The color-coded topographic view is based on a digital terrain model (DTM) of the region, from which the topography of the landscape can be derived. The reference body for the HRSC-DTM is a Mars sphere.