Spotlight on the Schiaparelli landing site

On 14 March 2016 the European Mars mission ExoMars 2016 was launched. The landing module Schiaparelli and the Trace Gas Orbiter (TGO) are scheduled to arrive at Mars in October 2016. Here we show a mosaic of Schiaparelli’s landing site prepared from image data of the High Resolution Stereo Camera (HRSC) on board Mars Express by the Planetary Sciences and Remote Sensing group at Freie Universität Berlin. The systematic processing of the HRSC image data was carried out at the DLR Institute of Planetary Research in Berlin-Adlershof. 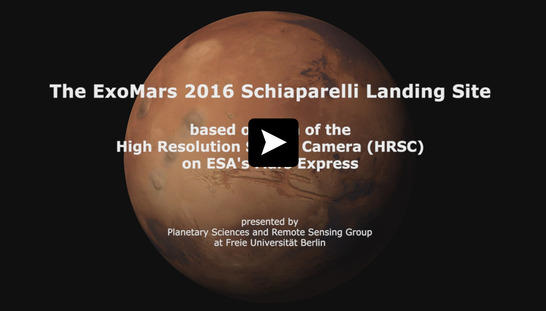 Schiaparelli is the Entry, Descent and Landing Demonstrator Module (EDM) of ESA’s ExoMars 2016 mission, which will land on Mars on 19 October 2016. Three days before reaching Mars, EDM will be separated from the orbiter. Soft landing will be enabled by aerobraking, parachutes, and a thruster system. At the Martian surface, different sensors on board will record the wind speed, humidity, pressure and temperature, as well as electric fields. With these measurements scientists hope to better understand the origin of dust storms on Mars. 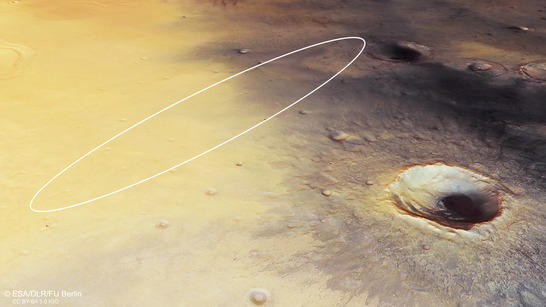 The landing site of Schiaparelli is shown in this HRSC-mosaic of the Meridiani Planum region in the Southern Highlands of Mars, delineated by an ellipse that measures 100 km East-West and 15 km North-South. This area is relatively flat and smooth and has been selected due to safety reasons. 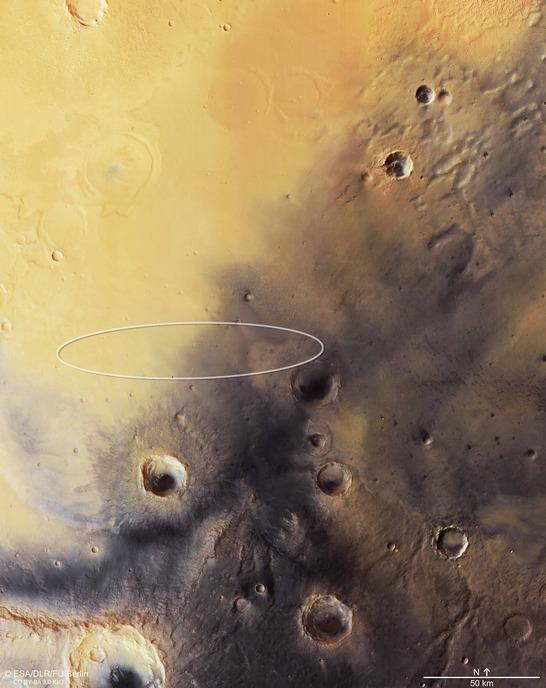 South-East of the landing ellipse the impact crater Endeavour is located, which has been studied by the Opportunity rover since 2011. NASA sent Opportunity and its twin rover Spirit to Mars in 2003. Spirit has been operating at Gusev crater until 2010, whereas Opportunity is still active, investigating clay sediments at the western rim of Endeavour crater at the moment. The rover also discovered dune fields in Endeavour that move by wind and dust storms. Sulfates and clays detected in-situ and from orbit are probably associated with a combination of groundwater and surface water. In addition, fine-grained rocks in Meridiani Planum hint to a shallow marine setting in the Martian past. 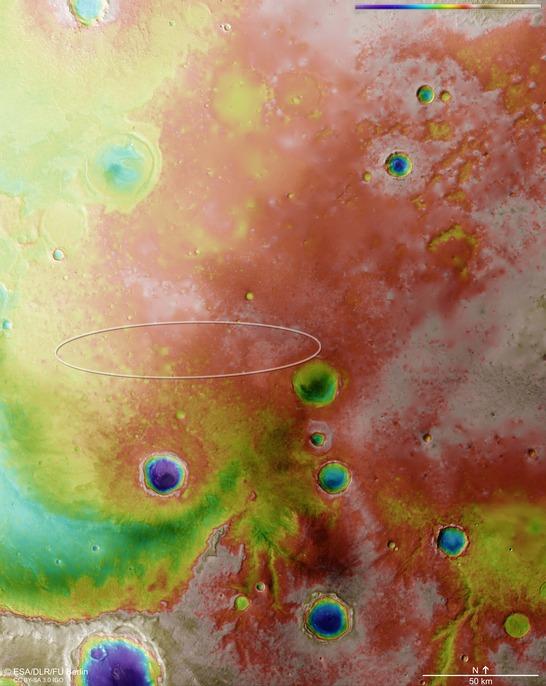 The mosaic consists of four orbit strips (2064, 2075, 2086, 8423) and covers a region 352.5°-356.5° East and 4.5° South to 0.5° North. The color mosaic was created using data from the nadir channel, the field of view of which is aligned perpendicular to the surface of Mars, and the color channels of the HRSC. The oblique perspective view was generated using data from the HRSC stereo channels. The color-coded topographic view is based on a digital terrain model (DTM) of the region, from which the topography of the landscape can be derived. The reference body for the HRSC-DTM is a Mars sphere.

To download released raw images and DTMs of the region in GIS-ready formats, follow this link to the mapserver