Kilometres-deep canyons in the 'Labyrinth of the Night'

The image, acquired by the High Resolution Stereo Camera (HRSC), which was developed and is operated by the German Aerospace Centre (Deutsches Zentrum für Luft- und Raumfahrt; DLR) and carried on board ESA’s Mars Express spacecraft, shows a portion of the impressive region called Noctis Labyrinthus – the Labyrinth of the Night. It consists of a labyrinth of intersecting valleys and canyons up to six kilometres deep. Extending over 1200 kilometres east to west, it is almost the same length as the River Rhine. The views shown here were created by the Planetary Sciences and Remote Sensing group at Freie Universität Berlin. The systematic processing of the HRSC image data is carried out at DLR. 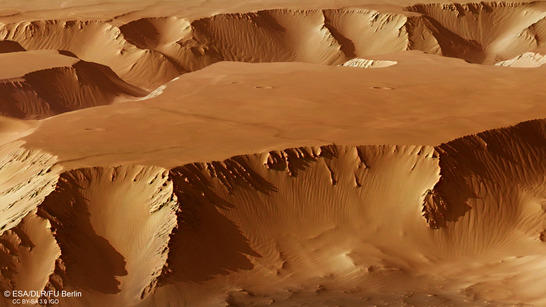 Some smaller side valleys between deeply cut grabens can also be seen in images 2, 3 and 4. However, giant mesas, the plateaus of which represent the original surface level of the Martian highlands, dominate the whole region. With a width of approximately 30 kilometres, the valley in the right half of the image is one of the widest in the entire labyrinth. Elsewhere, the canyons narrow to a few kilometres. If an astronaut were to stand at the bottom of these valleys, the towering escarpments rising several kilometres on either side would be quite a spectacular scene.

The formation of this canyon system is linked to the uplifting of the surface in the Tharsis region, which lies further to the west. Intensive volcanism led to tectonic stress in the Martian crust, and with it, the fracturing of large areas of the surface. At the same time, parts of the surface sank between blocks of terrain that were pulled apart. The largest volcanoes on Mars are also found in the Tharsis-Region. 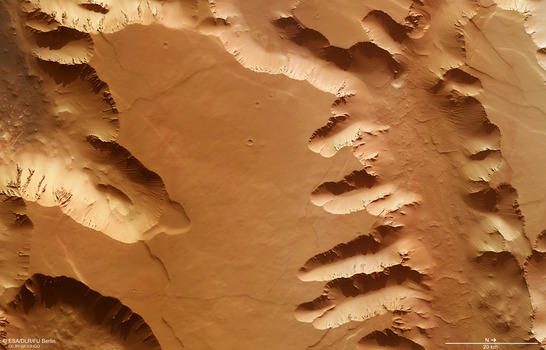 In many places, the steep valley slopes and the valley floor are covered with extensive landslides. Elsewhere, as can be seen well in these images on closer inspection, the slopes appear to be largely covered by massive wind deposits. The regular linear structures on the valley slopes visible on the left and right edges of the images can be interpreted as dune crests. From the alignment of the crests, it can be deduced that in some places, sand has been transported down the slope, while in other places, uphill transportation of the dune sand has taken place. 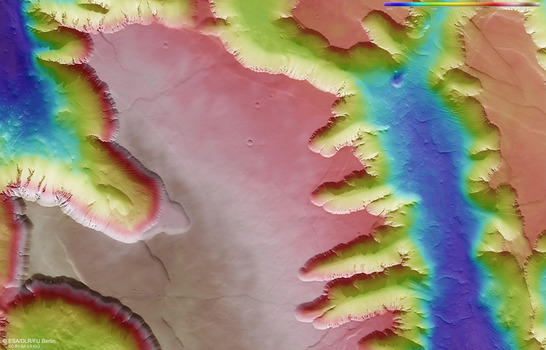 In every case, these surface structures created by the wind are no longer active. This is indicated not only by the consistent covering of red Martian dust (active dunes on Mars would be dark grey in appearance as they generally consist of old volcanic dust), but also by the presence of several small impact craters, visible in the lower right edge of the image, for example. In the event of a meteorite impact in an active dune, no crater would be left in the fine, loose material as the sand would trickle into the depression that was formed and immediately fill it back up again. Furthermore, any depression that was left would quickly be obliterated by sand moved by the wind. If the dunes are old and have hardened over the course of time, however, meteorites can leave small craters behind. The approximate age of the sand dunes can be determined If the crater sizes and frequencies are accurately measured. The small number and sizes of the craters found here indicates a relatively young age for the dunes. 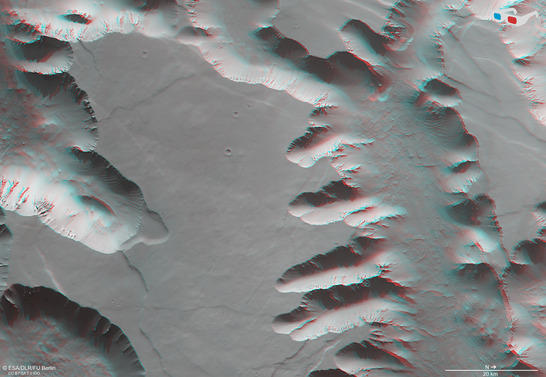 The image was acquired by the HRSC on July 15, 2015 during Mars Express Orbits 14,632, at 6 degrees south and 265 degrees east. The ground resolution is approximately 16 metres per pixel. The color mosaic (image 2) was created using data from the nadir channel, the field of view of which is aligned perpendicular to the surface of Mars, and the color channels of the HRSC. The oblique perspective view (image 1) was generated using data from the HRSC stereo channels. The anaglyph (image 4), which provides a three-dimensional view of the landscape when viewed using red-green or red-blue glasses, was derived from data acquired by the nadir channel and one stereo channel. The color-coded topographic view (image 3) is based on a digital terrain model of the region, from which the topography of the landscape can be derived.