A 'split' crater in Memnonia Fossae

The image, acquired by the High Resolution Stereo Camera (HRSC), which was developed and is operated by the German Aerospace Centre (Deutsches Zentrum für Luft- und Raumfahrt; DLR) and carried on board ESA’s Mars Express spacecraft, shows a part of the Memnonia Fossae region on Mars. This chain of faults is located to the west of the Tharsis volcanic region and north of Sirenum Fossae. The views shown here were created by the Planetary Sciences and Remote Sensing group at Freie Universität Berlin. The systematic processing of the HRSC image data is carried out at DLR. 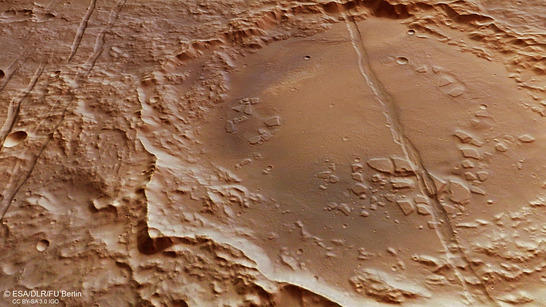 These graben features are all the result of tectonic stresses in the Martian crust and extend over 1600 kilometres in an east-west direction. Their origin is attributed to the bulging of the Tharsis volcanic region. They have been named the 'Rifts of Memnonia' after a temple complex in the ancient Egyptian city of Thebes.

The Tharsis region on Mars has been uplifted like a bowl the size of Europe that bulges four to five kilometres upwards. Some of the largest volcanoes in the Solar System can be found here. These include Olympus Mons (22 kilometres high) and the three Tharsis volcanoes of Ascraeus Mons (15 kilometres), Pavonis Mons (8 kilometres) and Arsia Mons (12 kilometres). The exact origins of this bulging mechanism are not yet understood. However, it is very likely that large quantities of magma fed from the Martian mantle over billions of years have exerted pressure on the crust from below. Low-viscosity lava then flowed across the region from the volcanic cones and fissures and added layer upon layer of volcanic rock over large areas.

The great weight of these additional layers of dense, iron-rich volcanic rock on the surface caused immense pressure. At the same time, the magma bubbles rising upwards from the Martian mantle were generating pressure from underneath. The Martian crust was therefore exposed to massive expansion stresses in the Tharsis region. This is evident in numerous tectonic rifts, faults and cracks in the bulging Tharsis shield and in the peripheral zones of this region (see also the image publication on Phoenicis Lacus dated 12 November 2010). The majority of these fracture zones extend outwards from the Tharsis region in a star shape and cut through the ancient southern Martian highlands

This type of expansion stress has given rise to a landscape pattern typical of tectonically stressed regions, known in geological terms as a 'horst and graben structure'. Because of the pressure on the crust, huge blocks of terrain between two fault lines running in parallel collapsed hundreds or even thousands of metres downwards and created the tectonic 'graben', bordered on each side by the 'horsts' that remained standing.

One very prominent graben is visible in the HRSC images, in an ancient impact crater with an already heavily eroded rim. It has a diameter of 52 kilometres and lies around 70 kilometres northeast of Dejnev Crater. This still unnamed crater is intersected by a graben 1.5 kilometres wide. Additional grabens can be seen to the north and south of the crater that appear to be split in some places and continue with a lateral offset.

Also prominent are a number of striking mesas that project several hundred metres above the level crater floor. The larger ones are up to 2.5 kilometres across. Their arrangement is somewhat reminiscent of many other 'chaotic terrains' on Mars – regions characterized by intense erosion. However, this small chaotic region, which appears to be the result of the crater being refilled with lava that presumably came from the deep rift, stabilised and hence protected the mesas from further erosion.

The many wind alleys created by wind erosion – referred to as Yardangs - that can be found on the flat floor between the mesas and around the graben (especially in the western part of the crater floor) indicate that a less erosion-resistant material once filled the crater. This might be material that the wind carried in – such as sand or dust – or sediments that were transported and deposited here by water.

The image was acquired by the HRSC on August 1, 2015 during Mars Express Orbits 14,689, at 22 degrees south and 197 degrees east. The ground resolution is approximately 14 metres per pixel. The color mosaic (image 2) was created using data from the nadir channel, the field of view of which is aligned perpendicular to the surface of Mars, and the color channels of the HRSC. The oblique perspective view (image 1) was generated using data from the HRSC stereo channels. The anaglyph (image 4), which provides a three-dimensional view of the landscape when viewed using red-green or red-blue glasses, was derived from data acquired by the nadir channel and one stereo channel. The color-coded topographic view (image 3) is based on a digital terrain model of the region, from which the topography of the landscape can be derived.