Traces of water in one of the biggest valleys on Mars

With a length of 600 km and a depth of up to 2 km Mawrth Vallis is one of the largest outflow channels on Mars. It is a candidate landing site for ESA’s ExoMars 2020 mission. The mosaic views were created out of image data from the High Resolution Stereo Camera (HRSC) on board Mars Express by the Planetary Sciences and Remote Sensing group at Freie Universität Berlin. The systematic processing of the HRSC image data was carried out at DLR. 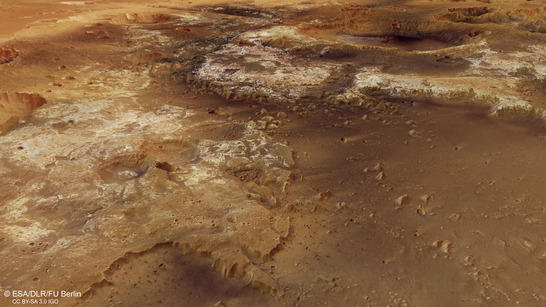 The presented mosaic covers an area of approximately 330,000 km² and is situated north of the Martian equator at the boundary of the Southern Highlands to the Northern Lowlands. Mawrth Vallis cuts the over 4 billion years old terrain Arabia Terra and discharges into the impact basin Chryse Planitia (see overview map). An animation produced in 2008 shows the flight over Mawrth Vallis.

Light-toned and dark-toned deposits are found in and around the outflow channel Mawrth Vallis. The light-toned layered sediments are the most widespread outcrops of phyllosilicates (clay minerals) on Mars. A dark cap rock overlies the clays. Investigations with the instrument OMEGA (Observatoire pour la Minéralogie, l'Eau, les Glaces et l'Activité) on board Mars Express led to a better understanding of the clay minerals, that are either iron-/magnesium-rich or aluminum-rich. In addition, sulfate-bearing deposits have been identified on the channel floor of Mawrth Vallis. 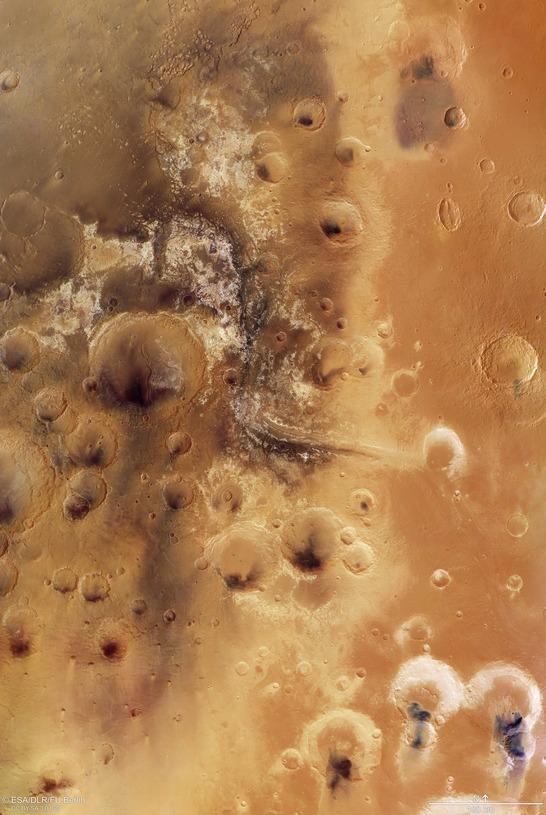 Phyllosilicates on Mars are a hint to surface alteration by aqueous activity and probably a sign for a habitable environment in the Martian past. Liquid water once flowed through Mawrth Vallis, and existed on the surface presumably until 3.6 billion years ago. Maybe even traces of microbes were preserved in the rocks, protected from radiation and erosion by the overlying cap rock. Hence, astrobiologists have a great interest in this region on Mars. 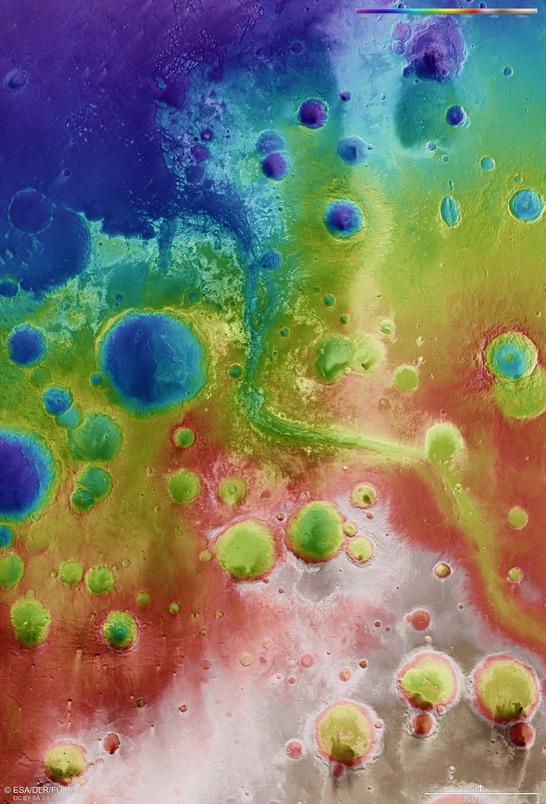 Mawrth Vallis is one out of four candidate landing sites for the ExoMars 2020 mission, which will send a European rover and a Russian platform to Mars to search for life. With a drill, the rover can take samples to be analyzed. Other proposed landing sites for the mission are Oxia Planum, Aram Dorsum and Hypanis Vallis.

The mosaic consists of 9 orbit strips (1564, 1337, 2229, 1542, 1326, 1293, 2938, 2196, 3297) and covers a region 338°-346° East and 17°-29° North. The color mosaic was created using data from the nadir channel, the field of view of which is aligned perpendicular to the surface of Mars, and the color channels of the HRSC. The oblique perspective view was generated using data from the HRSC stereo channels. The color-coded topographic view is based on a digital terrain model of the region, from which the topography of the landscape can be derived.