Image data acquired by the High Resolution Stereo Camera (HRSC) display the Southern Highlands of Mars. HRSC was developed and is operated by the German Aerospace Centre (DLR) and carried on board ESA’s Mars Express spacecraft. The crater shown is approximately four kilometres deep and has a diameter of roughly 50 kilometres. It has a central depression and drainage valleys at the crater rim. These structures indicate the presence of ice in the subsurface. An unusual dune field reveals that, at present, atmospheric processes shape the landscape. The views shown here were created by the Planetary Sciences and Remote Sensing group at Freie Universität Berlin. The systematic processing of the HRSC image data was carried out at DLR. 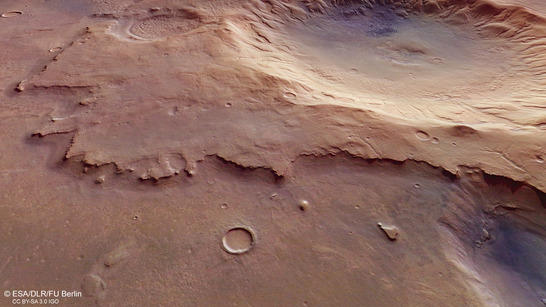 The, until now unnamed, crater is located southwest of Mare Serpentis, the 'Sea of Serpents', an albedo structure in the Noachis Terra region. Albedo, derived from the Latin word 'alba' for white or bright, is a measure of the reflectivity of surfaces. Dark or rough surfaces reflect less of the incident light than bright or smooth surfaces. Before the space age, the regions of the Moon and Mars with very low or very high albedo values originating from darker or lighter surfaces were identified this way when they were explored by telescope and were then, for example – as in the case of Mare Serpentis – named after seas or lakes because they have a similar albedo.

Approximately 3.9 billion years old, Noachis Terra is amongst the oldest regions of Mars. The Noachian geological era of Mars – covering the period from approximately 4.1 to 3.7 billion years before our time – is also named after this area (Noah's land). Noachis Terra is located in the southern highlands of Mars, west of the large impact basin Hellas Planitia. Numerous impact craters have been formed, altered and degraded in this region over billions of years.

The unnamed crater in the images shows a central depression. This type of impact crater is called a 'central pit crater'. They are commonly found on Mars but also occur on Jupiter's moons Ganymede and Callisto. Such a depression in the centre of the crater probably arises during or after impact by the vaporisation of underground ice which then, due to the sudden explosive expansion of the gas, literally tears a hole in the young crater depression.

The remains of an elevated plateau can be seen to the south and east of the crater. In the past the stacked deposits building the plateau were presumably distributed more uniformly over the area. The loose material was possibly solidified in the vicinity of the crater by the impact and the crater ejecta lay over it like a blanket.

Numerous small valleys and valley networks can be seen on the inner crater rim. Investigations of these valleys and gullies suggest that they were carved out both by meltwater and ice-rich debris flowing downslope. From time to time, the ground ice on the sun-exposed slopes in the interior of the crater melted, and the resulting water flowed towards the centre of the crater. The interior of the valleys is filled with ice-rich deposits, referred to as 'lineated valley fill' 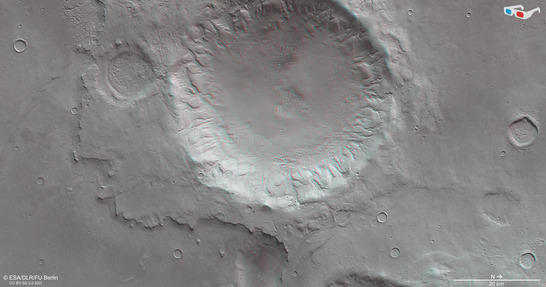 The images were acquired by the HRSC (High Resolution Stereo Camera) on July 29, 2015 during Mars Express Orbit 14680. The ground resolution is approximately 14 metres per pixel and the images are centered at 37° East and 35° South. The color image was created using data from the nadir channel, the field of view of which is aligned perpendicular to the surface of Mars, and the color channels of the HRSC. The oblique perspective view was generated using data from the HRSC stereo channels. The anaglyph, which provides a three-dimensional view of the landscape when viewed using red-green or red-blue glasses, was derived from data acquired by the nadir channel and one stereo channel. The color-coded topographic view is based on a digital terrain model of the region, from which the topography of the landscape can be derived.