The icy terraces of the giant Hellas basin

The image, acquired by the High Resolution Stereo Camera (HRSC), which was developed and is operated by the German Aerospace Centre (Deutsches Zentrum für Luft- und Raumfahrt; DLR) and carried on board ESA’s Mars Express spacecraft, shows the western part of the Hellas basin. A diameter of 2,200 kilometres and a depth of up to nine kilometres: these are the dimensions of the largest impact crater on Mars. Only the Moon's South Pole-Aitken Basin and the Valhalla structure on Jupiter's moon, Callisto, have a similar size. The views shown here were created by the Planetary Sciences and Remote Sensing group at Freie Universität Berlin. The systematic processing of the HRSC image data is carried out at DLR. 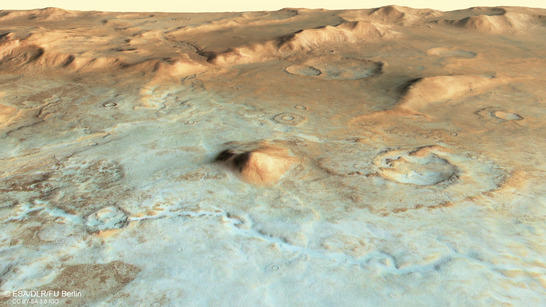 In the rim of the Hellas basin, enormous tectonic movements took place during, and immediately after, the impact. The terraces of the rim faults show a spectacular stair-stepped morphology. This impressive form can be seen best in images 2 and 4 the low-lying regions within the image are covered by frost and ice: at a latitude of 50 degrees south, the effects of the southern polar winter extending northwards from the South Pole are already visible. 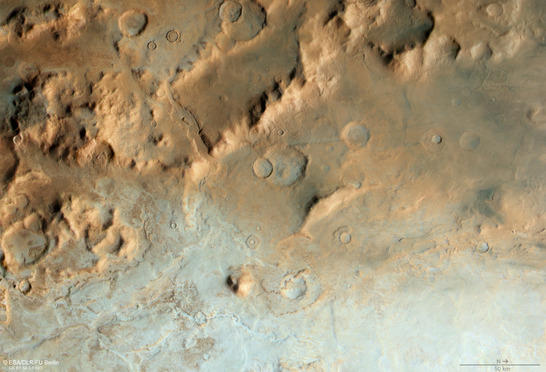 The features of the landscape here show traces of flow-like activity, as well as the transportation of material through valleys that extend to the floor of the impact crater, where the material was deposited at the topographically lowest point. The altitude difference in the region shown in the images is about 6.1 kilometres – measured from the highest point in the centre of the left section of the color image (image 2) to the lowest point in the bottom left section of the image. Comparable altitude differences within such a short horizontal difference are rare on Earth.

The ice flow of a rock glacier – in which the ice is covered by a large quantity of boulders and rock debris, which has slipped from the adjacent slopes of the mountain onto the glacier – has carved a narrow valley whose end is delimited by steep terrace slopes at the rim of the crater, as can be seen in the centre of the image. Glaciers can carry large quantities of material, which is deposited in the crater. This transportation and depositing mechanism results in a fan-shaped structure in the plain at the front end of the rock glacier. 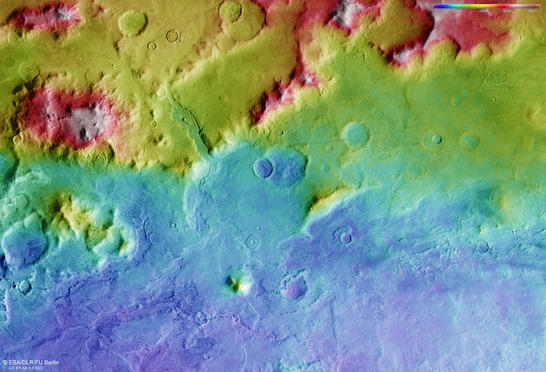 Sediment transport on the back of rock glaciers

A close look into the channel reveals parallel structures on the surface indicating the flow of the masses. The sediment structures left behind by rock glaciers are known as 'lineated valley fill'. The traces of movements of masses can be found almost everywhere in the region. This can be seen best in the centre left sections of images 2, 3 and 4. Here, a smaller impact crater was filled to the brim so that it overflowed, and surplus material fell downhill. In the immediate vicinity, numerous gullies cover the terraced slopes.

In the north of this region (right of the image) several impact craters can be seen in the lowland plain, some of which have severely eroded rims and depressions that are filled with sediments. Above the centre of the image a fault can be found, which crosscuts an older, filled impact crater. This fault has slightly displaced the rims of the crater relative to each other. The fault runs from south to north and creates a further step in the landscape, which is clearly apparent in the anaglyph image (image 4). This is interesting, because this fault must be more recent than the crater that it cuts through. This gives rise to the assumption of later activity of the terraced fault zone – maybe due to subsequent subsidence of the terraces.

In July 2014, images of the varied landscape in the vicinity of the Hellespontus Montes at the western rim of Hellas were published here. The region in the present images is about 300 kilometres to the southeast and is located somewhat deeper in the impact basin. Many of the morphological features found in this region are similar to those in the Hellespontus Montes. 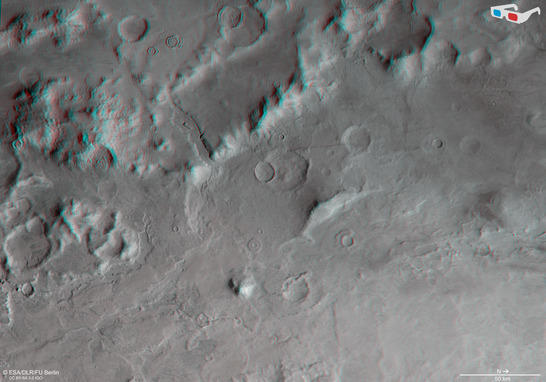 The image was acquired by the HRSC on December 6, 2015 during Mars Express Orbits 15,127, at 45 degrees south and 48 degrees east. The ground resolution is approximately 52 metres per pixel. The color mosaic (image 2) was created using data from the nadir channel, the field of view of which is aligned perpendicular to the surface of Mars, and the color channels of the HRSC. The oblique perspective view (image 1) was generated using data from the HRSC stereo channels. The anaglyph (image 4), which provides a three-dimensional view of the landscape when viewed using red-green or red-blue glasses, was derived from data acquired by the nadir channel and one stereo channel. The color-coded topographic view (image 3) is based on a digital terrain model of the region, from which the topography of the landscape can be derived.