Image data by the High Resolution Stereo Camera (HRSC) on board ESA’s Mars Express mission acquired end of May 2016 show glacial features at the dichotomy boundary on Mars. The dichotomy boundary separates the smooth Northern Lowlands from the rugged Southern Highlands. The views shown here were created by the Planetary Sciences and Remote Sensing group at Freie Universität Berlin. The systematic processing of the HRSC image data was carried out at the DLR Institute of Planetary Research in Berlin-Adlershof. 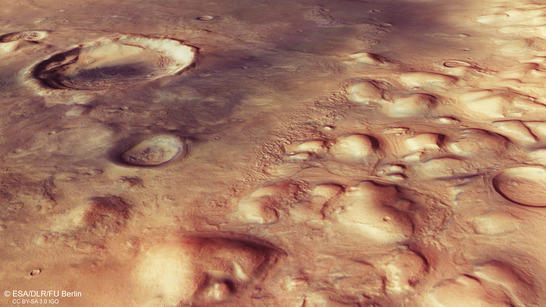 The topographic division (Greek: dichotomy) into a northern area with lowlands and the older, southern highlands with numerous impact craters represents one of the most striking features of Earth's planetary neighbour. The cause of this has not yet been determined. Some scientists believe it is possible that the northern hemisphere of Mars was struck by a large asteroid more than four billion years ago, which acted like a 'grazing shot' that caused several kilometres of the young rock crust to be 'shaved off'. In many areas, the dichotomy boundary consists of a several kilometre-high escarpment, which marks a topographical difference between the highlands of the southern hemisphere and the low-lying northern hemisphere of Mars.

Glaciers were active at the dichotomy boundary

The Colles Nili region is located directly at the foot of the dichotomy escarpment and, amidst smooth terrain, contains several 1000 to 2000 metre high mountains  that are probably the heavily eroded remains of the adjoining ancient highlands in the south. The hills are distributed across the landscape like inselbergs or 'escarpment outliers' and are surrounded by smooth, undulating deposits, known as lobate debris aprons. These are streams of rock debris and ice that moved downhill, flowing around obstacles in the landscape before coming to a standstill. In addition, deposits can be seen between the hills, which form a linear pattern on the surface and are known as lineated valley fills. These features form when masses of rock, ice and dust slowly slide down opposing slopes, meet on the valley floor and overlap.

It is likely that both lobate debris aprons and lineated valley fills form from debris-covered ice flows known as rock glaciers, and they occur along the entire Martian dichotomy boundary. These glacial deposits may have formed through the collapse of a regional, retreating ice cover, which was then increasingly covered by rock debris sliding onto the ice laterally. There may have been several episodes of glacial activity in this region over the last hundreds of millions of years. The dark material covering the hills and plains in some places is sand of volcanic origin, which can pile up to form dunes such as those within the large impact crater, for example.

The images were acquired by the HRSC (High Resolution Stereo Camera) on 29 May 2016 during Mars Express Orbit 15727. The ground resolution is approximately 15 meters per pixel and the images are centered at 60° East and 36° North. The color image was created using data from the nadir channel, the field of view of which is aligned perpendicular to the surface of Mars, and the color channels of the HRSC. The oblique perspective view was generated using data from the HRSC stereo channels. The anaglyph, which provides a three-dimensional view of the landscape when viewed using red-green or red-blue glasses, was derived from data acquired by the nadir channel and one stereo channel. The color-coded topographic view is based on a digital terrain model (DTM) of the region, from which the topography of the landscape can be derived. The reference body for the HRSC-DTM is a Mars sphere.

To download released raw images and DTMs of the region in GIS-ready formats, follow this link to the Mapserve.