The final year of a long and eventful journey begins

The unmanned space probe Cassini-Huygens is not only one of the most ambitious space missions that ever took place, but also one of the most successful. After 12 years of continuously exploring the Saturnian system with its imposing rings and over 60 known moons, the Cassini probe begins the final year of this mission on Sept 15, 2016. This last phase, Cassini`s “Grand Finale”, will differ in several aspects from the previous mission. 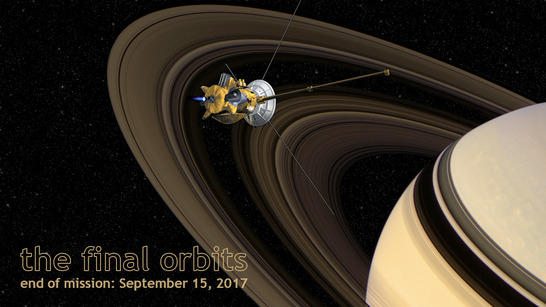 The "Grand Finale" of a longtime mission

On October 15, 1997 the international Cassini-Huygens mission was launched in Cape Canaveral, Florida. After a journey of almost seven years and 3.5 billion kilometers, the two space probes reached in 2004 the orbit of the large gas planet Saturn, which is almost 10 times farther away from the sun than our earth. On December 25, 2005 the Huygens landing capsule, a contribution of the European Space Agency (ESA), was released from the Cassini orbiter. Three weeks later Huygens reached the largest Saturnian moon Titan, plunged into its atmosphere and hanging from a parachute, sent unique images and data to Earth for several hours. Thereby, the Huygens lander accomplished the very first successful landing on a moon of an alien planet. Cassini itself successfully orbits Saturn to this day and with its extensive scientific equipment intensively investigates Saturn`s magnetosphere, atmosphere, the inner structure as well as the rings and moons. A variety of different data was collected during this mission (just the cameras supplied more than 400.000 images) which led to many new and often surprising knowledge concerning the Saturnian system.

Originally the mission was scheduled for a duration of four years (“primary mission”, 2004-2008). Since the Cassini mission was exceedingly successful, it was extended for another two years (the so called “Cassini Equinox Mission”, 2008-2010). But after that the probe was still fully functional and continuously made new exciting discoveries. So there was a second extension of the mission, this time even for seven years (2010-2017), the so called “Cassini Solstice Mission”. 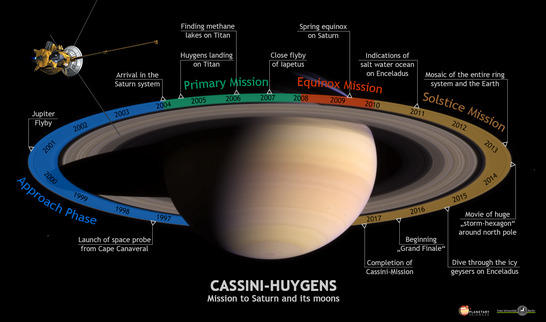 Mission phases and some discoveries

During the twelve years at Saturn, the mission provided numerous insights about the composition and structure of Saturn´s rings. In addition, Cassini discovered several unknown small moons (for example the moon Daphnis, circling within the ring system). Through the long-standing observation period at close range, it was possible to track the weather conditions and seasonal changes on Saturn – hence the terms “equinox” and “solstice” for the mission extensions. Among other things, a massive storm system, that lasted nearly one year and finally covered the entire gas planet, was discovered. And Cassini regularly transmited stunningly beautiful images of Saturn with seasonal variations of rings and shadows.

Moreover, Cassini`s long-term observations provided completely new insights into the fascinating worlds of the Saturnian moons: the lakes of liquid methane on Titan represent the first discovery of open “waters” on another celestial body than Earth. The geysers in the south polar region of Enceladus throw out huge fountains of icy water into space. This demonstrates a high level of geological activity on a small moon and the existence of a reservoir of liquid water not very far below the surface. A mountain ridge along the equator, up to 20 km high and encircling the entire moon Iapetus, was also discovered by Cassini. These are only a few examples of discoveries; each of the 62 known Saturnian moons has its characteristics and through Cassini it became obvious how different and fascinating these icy worlds far away from home really are.

After a final close flyby on Titan, the last phase of the Cassini-Huygens mission, the so called “Grand Finale”, begins on November 30, 2016. The last Saturn orbits first guide Cassini very close to the outer edge of the ring system; then from April 2017 the orbiter will dive between the planet´s atmosphere and the innermost edge of the rings. Several spectacular flight maneuvers should bring Cassini to the rings and the planet as close as never before. During this phase the scientists hope for new insightful measurements, for example about the ring structure and the mass of the ring system. After a twenty-year long journey in space, in exactly one year from now, on September 15, 2017 the mission will come to an end. After a total of 294 Saturn orbits, Cassini will controlled plunge into the upper atmosphere of the gas planet and burn up like a meteor. This is intended to prevent the contamination of the Saturnian moons through any remaining terrestrial microorganisms.

The international Cassini-Huygens mission is a joint project of NASA, ESA and ASI, the Italian Space Agency aimed at the exploration of the Saturnian system. The Jet Propulsion Laboratory (JPL) at the California Institute of Technology in Pasadena manages the mission for NASA's Science Mission Directorate. The Cassini orbiter and its two onboard cameras were designed, developed and assembled at JPL. The imaging operations center is based at the Space Science Institute in Boulder, Colorado.

Further information about the Cassini-Huygens Mission can be found on our webpages, on the webpages of NASA http://saturn.jpl.nasa.gov and http://www.nasa.gov/cassini and on the homepage of the Cassini Imaging Team http://ciclops.org.