The image, acquired by the High Resolution Stereo Camera (HRSC), which was developed and is operated by the German Aerospace Centre (Deutsches Zentrum für Luft- und Raumfahrt; DLR) and carried on board ESA’s Mars Express spacecraft, shows the western part of the Arda Valles, a dendritic drainage system located 260 km north of Holden Crater. The views shown here were created by the Planetary Sciences and Remote Sensing group at Freie Universität Berlin. The systematic processing of the HRSC image data is carried out at DLR. 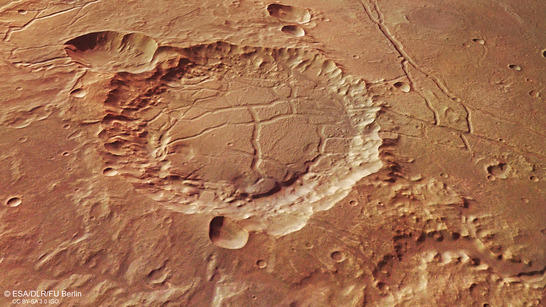 When looking at the large-scale topography along the equator of Mars, what truly stands out are the many, extremely wide drainage channels leading north without many lateral inflows. The smaller valley systems are not so noticeable in these images. They often have multiple branches and meander across the terrain. Such valley systems can be found on Earth. Arda Valles in the Martian highlands is a good example of such a drainage system.

Arda Valles, named after a river in ancient Thrace, lies approximately 260 kilometres north of Holden Crater. A flow of water originating from the south flowed through Holden Crater and proceeded to drain out via Ladon Valles to the north, in the direction of a large, unnamed and heavily-weathered impact basin. The water that flowed through Arda Valles streamed through the southeastern edge into this large, sediment-filled basin (see context map).

In the left (southern) half of images 2, 3 and 5 it is apparent that water flowed through a drainage network approximately 175 kilometres long and 50 to 80 kilometres wide. More than three billion years ago, water flowed through this network, draining in the direction of an ancient impact basin. In hydrology, such a river course pattern is referred to a 'dendritic', a term derived from dendron, the Greek word for tree. The main valleys are up to two kilometres across, which is exceptionally wide for valleys in a dendritic network on Mars. It is possible that, in the planet's earlier history, large quantities of water flowed through this relatively narrow, confined area; however, this cannot be verified with complete certainty based on the images.

A large mountain range, some 20 kilometres wide and a little over 2000 metres high, is visible at the top centre of the images. It might be the remains of the crater rim of a very old impact structure. At the foot of the eastern side of this mountain range is a smaller, approximately 8.5-kilometre-wide crater with a strikingly flat interior. The crater was filled with sediment that came from the mountain ridge. This can be determined by the fan-like shape of the deposits.

To the right of the image centre, a 25-kilometre-diameter crater is visible; it, too, has been filled by sediment. The once smooth surface, however, now features deep fissures as a result of settlement movements, so that it has formed 'chaotic terrain'. A very similar structure was discovered just a few kilometres further east in this region by HRSC in 2012, in the Sigli and Shambe craters. The images presented here reveal an unusual number of uneven areas on the slopes of the crater interior, instead of what is usually seen in craters of this size, specifically more terrace-like, curved topographic features. These structures may indicate the original level of the sediment layers in the crater interior.

Upon closer inspection, layered, significantly lighter deposits are found in some places between this crater and the lower courses of the dendritic valleys. Measurements with spectrometers suggest that this is clay. Clay minerals are found in numerous places on Mars; they are a typical weathering product of dark, iron- and magnesium-rich volcanic rock that has been eroded by water. This also points to water having flowed through the dendritic valley network a very long time ago, probably more than three-and-a-half billion years ago. The clay minerals identified on Mars are located almost exclusively on landscapes dating to the early days of Mars. These hydrous clay minerals contrast with salt deposits in other locations that are not as old.

The region to the north of the images (right in 2, 3 and 4) is dominated by the southwestern part of the surface of an unnamed impact basin approximately 350 kilometres across. This surface was also formed by sediments that were transported by the dendritic valleys to the crater rim and to the interior of the basin, and also by larger tributaries from the south, such as Ladon Valles. The prominent linear structures indicate that the surface was exposed to tension due to settlement movements and that this resulted in tectonic faults, the structural process of which can be easily understood. The cause of the settlement movements could have been the evaporation of water and soil moisture, resulting in the formation of cavities that caved in on themselves, reduced the volume, and triggered tectonic fractures.

The image was acquired by the HRSC on July 20, 2015 during Mars Express Orbits 14,649, at 19 degrees south and 327 degrees east. The ground resolution is approximately 14 metres per pixel. The color mosaic (image 2) was created using data from the nadir channel, the field of view of which is aligned perpendicular to the surface of Mars, and the color channels of the HRSC. The oblique perspective view (image 1) was generated using data from the HRSC stereo channels. The anaglyph (image 4), which provides a three-dimensional view of the landscape when viewed using red-green or red-blue glasses, was derived from data acquired by the nadir channel and one stereo channel. The color-coded topographic view (image 3) is based on a digital terrain model of the region, from which the topography of the landscape can be derived.