Image data by the High Resolution Stereo Camera (HRSC) on board ESA’s Mars Express spacecraft acquired in June 2016 feature giant polygons in the Northern Lowlands of Mars. “Giant” means the polygon-like structures have sizes of several kilometers in diameter. These polygons are an indicator of the existence of a former ocean on Mars. The views shown here were created by the Planetary Sciences and Remote Sensing group at Freie Universität Berlin. The systematic processing of the HRSC image data was carried out at the DLR Institute of Planetary Research in Berlin-Adlershof. 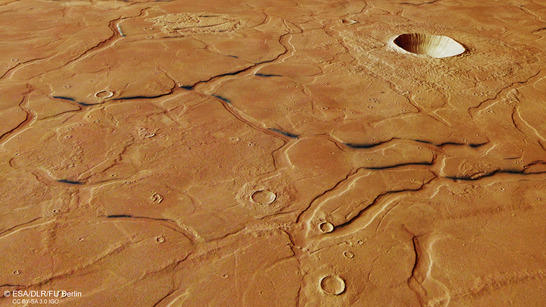 Utopia Planitia is a buried ~2000 km diameter impact basin located in the Northern Lowlands of Mars. In 1979, the NASA Viking 2 Lander touched down in north-eastern Utopia Planitia and captured an icy landscape with its camera. Ice and frost observed on the surface today did also play a role in the Martian past: Impact craters in this region show characteristic “pancake-like” ejecta blankets, which indicate the presence of ice and water in the subsurface at the time of the impact. Scientists believe a large water/ice reservoir once existed in Utopia Planitia.

The labyrinth-like fracture system shown in the HRSC images consists of crosscutting graben of up to 2 km widths which form polygon-like structures with diameters 5-20 km. The formation of these giant polygons in the Utopia Planitia region is attributed to tectonic processes and sediment loading. The Utopia Planitia polygons are comparable in size and morphology to terrestrial offshore polygons created by fluid expulsion due to burial of fine-grained sediments.

Recent research results link the giant polygons to a putative ancient ocean in the Martian Northern Lowlands. It has been suggested that the polygons formed in fine-grained sediments covering a rough basement. Fine-grained sediments are known to be deposited in large standing bodies of water, like oceans or lakes. The buried topography now covered by the sediments could have once looked similar to the rough topography of the Southern Highlands we observe on Mars today.

The images were acquired by the HRSC (High Resolution Stereo Camera) on June 21, 2016 during Mars Express Orbit 15804. The ground resolution is approximately 15 meters per pixel and the images are centered at 101° East and 39° North. The color image was created using data from the nadir channel, the field of view of which is aligned perpendicular to the surface of Mars, and the color channels of the HRSC. The oblique perspective view was generated using data from the HRSC stereo channels. The anaglyph, which provides a three-dimensional view of the landscape when viewed using red-green or red-blue glasses, was derived from data acquired by the nadir channel and one stereo channel. The color-coded topographic view is based on a digital terrain model (DTM) of the region, from which the topography of the landscape can be derived. The reference body for the HRSC-DTM is a Mars sphere.

To download released raw images and DTMs of the region in GIS-ready formats, follow this link to the Mapserver