Acheron Fossae – is it a rift system?

Image data by the High Resolution Stereo Camera (HRSC) on board ESA’s Mars Express mission from May 2016 reveal the western part of Acheron Fossae, a system of tectonic graben on the Martian surface. The views shown here were created by the Planetary Sciences and Remote Sensing group at Freie Universität Berlin. The systematic processing of the HRSC image data was carried out at the DLR Institute of Planetary Research in Berlin-Adlershof. 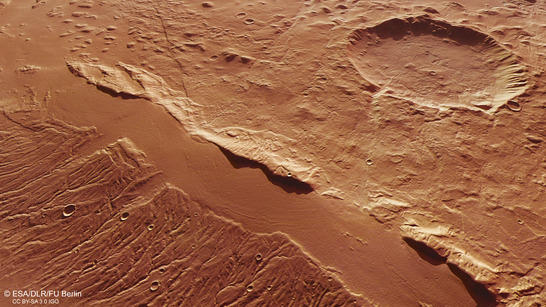 The HRSC images show the westernmost part of Acheron Fossae, an arcuate topographic rise with a size of 800x280 km that stands up to 2 km above the surroundings. Fossae is latin and means furrows, trenches, or graben.

The Acheron Fossae constitute a system of extensional graben that formed by diverging movements of crustal blocks of rock 3.7-3.9 billion years ago. The graben depressions are filled with flow-like material, possibly rock glaciers that have been deposited under cold climate conditions during the last millions of years. The perspective view features one prominent representative of such a graben filled with glacial material.

Scientists claim that Acheron Fossae has much in common with terrestrial continental rifts. A rift is made up of topographic depressions bounded by faults, which build a horst-and-graben system. “Horst” denotes an uplifted block of rock and “graben” denotes a downthrown block of rock. Unlike Earth, where rifts are associated with plate tectonics, Martian rifts might have resulted from the response of the crust to regional stress fields governed by subsurface composition. 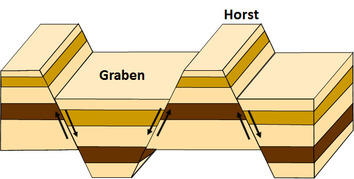 The images were acquired by the HRSC (High Resolution Stereo Camera) on 4 May 2016 during Mars Express Orbit 15641. The ground resolution is approximately 18 meters per pixel and the images are centered at 142° West and 36° North. The color image was created using data from the nadir channel, the field of view which is aligned perpendicular to the surface of Mars, and the color channels of the HRSC. The oblique perspective view was generated using data from the HRSC stereo channels. The anaglyph, which provides a three-dimensional view of the landscape when viewed using red-green or red-blue glasses, was derived from data acquired by the nadir channel and one stereo channel. The color-coded topographic view is based on a digital terrain model (DTM) of the region, from which the topography of the landscape can be derived. The reference body for the HRSC-DTM is a Mars sphere.

To download released raw images and DTMs of the region in GIS-ready formats, follow this link to the mapserve.

Southeast of Pickering Crater – complex history in one shot