The image, acquired by the High Resolution Stereo Camera (HRSC), which was developed and is operated by the German Aerospace Center (Deutsches Zentrum für Luft- und Raumfahrt; DLR) and carried on board ESA’s Mars Express spacecraft. An unusual observation by Mars Express shows a sweeping view over the planet’s south polar ice cap and across its ancient, cratered highlands. The views shown here were created by the Planetary Sciences and Remote Sensing group at Freie Universität Berlin. The systematic processing of the HRSC image data is carried out at DLR.

During normal scientific imaging, the camera typically takes images pointing straight down towards the surface, from around the closest point to the planet along the spacecraft’s elliptical orbit at an altitude of about 300 km.

But in this unusual observation, known as a ‘broom calibration’ image, Mars Express turned such that its camera panned over the surface far above the planet, close to its furthest point along its orbit, in this case at around 990 km.

Importantly, as well as affording an unusual wide view, this allows the camera to record a range of features at the same illumination conditions, allowing essential calibration of the camera’s sensors. 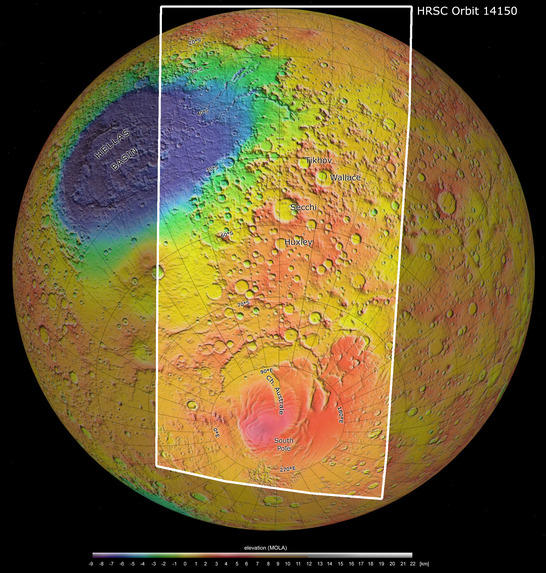 Color coded digital terrain map: The elevation is indicated in the scale, with whites to reds the highest terrains, and blues to purples the deepest.

Towards the bottom of the image is the south polar ice cap, comprising frozen water and carbon dioxide ice. This feature changes in size and shape with the seasons; the main image presented here was captured during the south polar summer, but during winter the ice extends into the smooth regions that can be seen surrounding it.

The mid-section of the image corresponds to the planet’s ancient southern highlands – it is covered by a high density of impact craters of varying size and states of erosion, with many craters overlapping. Numerous patterns of dark, dusty dune deposits are also visible, swept up by wind and accumulating in impact craters and troughs.

Towards the top left of the image a portion of the giant Hellas basin can be seen. This feature spans more than 2200 km across and plunges some 8 km below the surface. Two prominent channels – Dao Vallis and Niger Vallis – can be seen breaching the basin rim, made out as thin, dark wiggly lines in the colour image. Hazy patches seen in the upper part of the image are attributed to clouds, while a thin, delicate layer of atmosphere follows the curvature of the planet at the horizon.

The image was acquired by the high-resolution stereo camera on ESA’s Mars Express on 25 February 2015, during orbit 14150. The image spans from the south pole to about 10º N, and includes a portion of the vast Hellas Basin. The ground resolution is about 1 km per pixel at the closest point of the surface. The color image was created using data from the nadir channel, the field of view of which is aligned perpendicular to the surface of Mars, and the color channels of the HRSC. These channels have been co-registered using pass points to achieve a common geometry. The color-coded topographic view is based on a digital terrain model of Mars made from the Mars Orbiter Laser Altimeter (MOLA) experiment on board of the NASA Mars Global Surveyor (MGS) spacecraft.

Where expressly stated, images are licenced under the Creative Commons Attribution-ShareAlike 3.0 IGO (CC BY-SA 3.0 IGO) licence. The user is allowed to reproduce, distribute, adapt, translate and publicly perform it, without explicit permission, provided that the content is accompanied by an acknowledgement that the source is credited as 'ESA/DLR/FU Berlin', a direct link to the licence text is provided and that it is clearly indicated if changes were made to the original content. Adaptation/translation/derivatives must be distributed under the same licence terms as this publication.