Siloe Patera – a supervolcano on Mars?

The latest images acquired using the High Resolution Stereo Camera (HRSC) on board the ESA Mars Express spacecraft show part of the Arabia Terra region on Mars, located at around 35 degrees north of the Martian equator and a few degrees east of the prime meridian. A geological construct observed here is the subject of some debate among experts – Siloe Patera. The views shown here were created by the Planetary Sciences and Remote Sensing group at Freie Universität Berlin. The systematic processing of the HRSC image data is carried out at DLR. 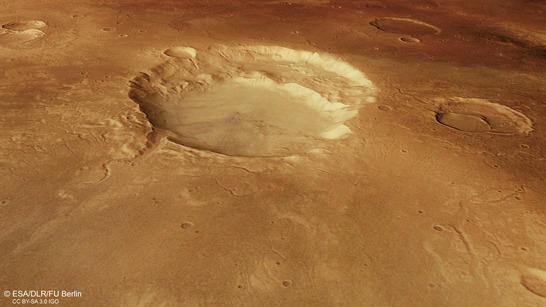 At present, the Siloe Patera construct in the Martian highlands is the cause of much debate among scientists. Is Siloe Patera actually the remains of a supervolcano? There is evidence to suggest this – but also evidence against it. It is a current example of an interesting geoscientific debate.

Paterae refer to peak regions of very flat shield volcanoes on Mars that generally have a large caldera above an empty magma chamber.

The almost circular depression of Siloe Patera can be seen in the centre of the images (2, 3, 4). It is around 40 kilometres long and 30 kilometres wide. The structure is named after the Castilian sculptor and architect Diego de Siloé (1495 to 1563). A second hollow – also round – is located within the depression. Some scientists think that this type of geological structure and several similar structures in this region of Mars are calderas of very flat volcano complexes – volcanoes that resemble the few supervolcanoes on Earth in shape. One example of such a supervolcano is the Yellowstone volcano, with a caldera 60 kilometres long and 40 kilometres wide. 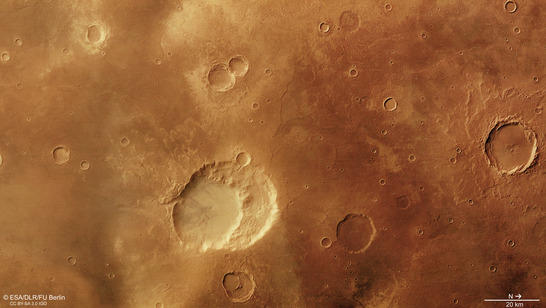 Over 1000 cubic kilometres of lava in the magma chamber

During their extremely explosive eruptions, supervolcanoes form large calderas instead of volcanic cones. The magma chamber located under the volcanic region is very large compared to that of normal volcanoes and has a volume of at least 1000 cubic kilometres. Eruptions of supervolcanoes on Earth are very rare and none have been observed in recorded history. However, we know that their effects are catastrophic and the consequences widespread. The volcanic region is lifted up over long periods of time by the accumulation of gas in the magma chamber, and magma emerges in locations that are distant from the chamber. A circular rift appears around the magma chamber as a result of the uplifting of the ground. The interior of this ‘lid’ then sinks into the empty magma chamber, leaving behind the caldera typical of a supervolcano.

Siloe Patera exhibits some of these characteristics. There are traces of rifts in the ground, the region is relatively flat and there are lacerated, layered deposits. Furthermore, Siloe Patera lacks some of the features typical of an impact crater, such as a central mountain. In addition, the absence of a high crater rim has been used as an argument in favour of volcanism, although there are numerous examples on Mars of impact craters whose rims have long been eradicated by erosion. What might appear to be lava flows at Siloe Patera – and this would support the theory of a supervolcano – could also be interpreted as an ejecta blanket, as seen in the northwest of the crater (upper left in the plan views). 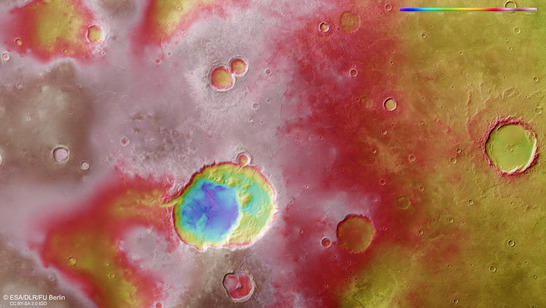 Evidence for the supervolcano – and against it

The deepest depression in Siloe Patera reaches 1750 metres below the surrounding plains, and the somewhat shallower depression sinks another 700 metres below this. The slopes of the smaller interior depression are very steep. This is very atypical for an impact crater but, on the other hand, it could have been formed by a subsequent, smaller impact inside the already existing larger crater.

The structure is surrounded by numerous small channels and gullies partly flowing into the depression. At the southern tip of the depression, a feature reminiscent of sapping valleys is visible. These occur when groundwater escapes from beneath the edge of the terrain, the caverns created by this collapse and the eroded material is transported away along the course of the valley by the flowing water. A sharp rim that is somewhat uplifted in various places also appears here.

Directly above this feature is a region some 20 by 20 kilometres in size that contains numerous smaller, dendritic outflow channels on a material that looks like ejecta. This deposit could be a cooled lava sheet, or the ejecta blanket from an impact crater. In specialist literature, it is described as the remnant of a possible gas-rich, extremely hot pyroclastic lava flow. On the other hand, the lobate edges are also similar to ejecta blankets caused by small impact craters. Asymmetrical ejecta blankets occur at oblique impact angles of 15 degrees or less. 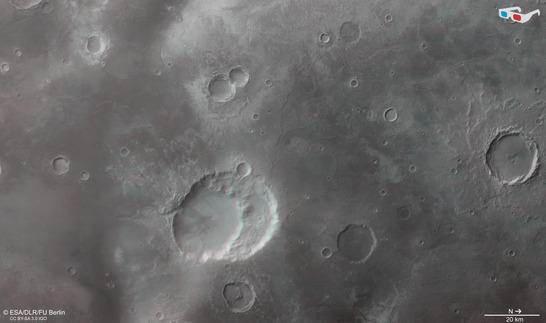 Influence of volcanoes on the early climate of Mars

Advocates of the supervolcano theory believe there is enough evidence to support the supervolcano theory. In addition to the arguments mentioned above, the lacerated deposits of fine-grained, layered materials containing sulphates and clay minerals that are widespread in the equatorial region and that may have been distributed across the whole of Arabia Terra by the size of the explosion are also cited. Their origin has not yet been conclusively explained; nevertheless, the idea of such enormous volcanic centres could explain the origin of such deposits and – at the same time – the periods of global warming on Mars.

At Siloe Patera, the Red Planet is once again showing its mysterious face. Do these images reveal the remains of an impact crater eroded over time, or do they show a new category of Martian volcano? Whichever it is, we need yet more high-resolution data and lander missions to unlock the secrets of our planetary neighbour.

The image was acquired by the HRSC on November 26, 2014 during Mars Express Orbits 13,837at 36 degrees north and 6 degrees east. The ground resolution is about 24 metres per pixel. The color plan view (image 2) was created using data from the nadir channel, the field of view of which is aligned perpendicular to the surface of Mars, and the color channels of the HRSC. The oblique perspective view (image 1) was generated using data from the HRSC stereo channels. The anaglyph (image 4), which provides a three-dimensional view of the landscape when viewed using red-green or red-blue glasses, was derived from data acquired by the nadir channel and one stereo channel. The color-coded plan view (image 3) is based on a digital terrain model of the region, from which the topography of the landscape can be derived.