The mountain massif of Phlegra Montes extends into the northern lowlands of Mars like a long, slightly curved salient. Stretching for hundreds of kilometres, this alignment of numerous mountains, rolling hills and ridges lies to the east of the volcano Hecates Tholus in the Elysium volcanic region. This geological formation provides insights into the metamorphosis of a landscape marked by changes to the Martian climate millions of years ago. The views shown here were created by the Planetary Sciences and Remote Sensing group at Freie Universität Berlin. The systematic processing of the HRSC image data is carried out at DLR Institute of Planetary Research Berlin-Adlershof. 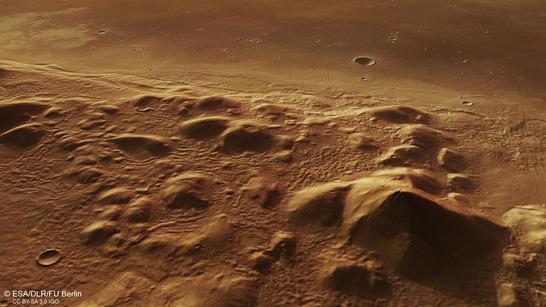 Mars' rotational axis – inclined at an angle of 25.2 degrees relative to the planet's plane of motion around the Sun – is similar to Earth's. The Red Planet experiences comparable variations in the amount of solar radiation depending on the latitude and time of year. But these changes are less pronounced, due to the planet’s greater distance from the Sun. At 30 and 50 degrees north, Phlegra Montes sits in the temperate latitudes of Mars; on Earth, this would be comparable to a range of mountains stretching from North Africa to Frankfurt.

This has not always been the case with this climatic zone. It is now known that Mars' rotational axis inclination is subject to severe variations. At times, its tilt has increased to 60 degrees, and then reduced again; the solar radiation at different latitudes has not been constant for millions of years in the way that it has been on Earth. This means that the climate has varied extremely from place to place throughout time.

The consequence of extreme climatic variation is visible in the traces of activity involving polar ice that are found not only at the current Martian poles, but also at temperate latitudes, and even near the equator. Massive glaciation must also have occurred in Phlegra Montes at some time in the past, as can be seen very clearly in the article published on 2 December 2011 (Phlegra Montes orbit 9465).  These new images of Phlegra Montes were acquired on 8 October 2014 during Mars Express orbit 13,670. The centre of the images is at 160 degrees east and 31 degrees north.

Knowledge of these basic conditions helps to better understand the features we see in Phlegra Montes today, which are partially the result of climate change and its effects. Radar measurements acquired when looking for evidence of subterranean ice layers and investigations of the landscape lead numerous scientists to believe that the region must have been heavily glaciated hundreds of millions of years ago. Based on crater frequency measurements, the age of Phlegra Montes has been limited to 3.91 to 3.61 billion years; this implies that the mountain range is much older than the surrounding lowlands.

Lava flows from the volcano Hecates Tholus – 400 kilometres away?

The HRSC images show the southern foothills of Phlegra Montes. The western area (upper half of the picture in images 2, 3 and 4) is dominated by a plain of smooth material that reaches the mountains and covers their base. Closer inspection reveals several wrinkle ridges that were formed during the cooling of non-viscous basaltic lava. It is possible that the lava that forms this plain originates from the volcano Hecates Tholus, which lies some 450 kilometres to the west and was presented in this image series on 1 March 2004, at the beginning of the Mars Express mission (Hecates Tholus orbit 0032).

Several small valleys running from west to east and ending in a basin-shaped structure can be seen on the flanks of a group of small hills in the centre of images 2, 3 and 4. The material that was deposited in this depression looks different to that on the mountain slopes; it appears to be more affected by erosion than the surroundings. On the hills lying farthest to the east (lower edge of the image), this material bulges out in places at the foot of these mountains, indicating the occurrence of landslides of entire layers of rock on the mountain slopes lying to the west.

The image was acquired by the HRSC on October 8, 2014 during Mars Express Orbits 13670 31 degrees north and 160 degrees east. The ground resolution is about 15 metres per pixel. The color image (image 2) was created using data from the nadir channel, the field of view of which is aligned perpendicular to the surface of Mars, and the color channels of the HRSC. The oblique perspective view (image 1) was generated using data from the HRSC stereo channels. The anaglyph (image 4), which provides a three-dimensional view of the landscape when viewed using red-green or red-blue glasses, was derived from data acquired by the nadir channel and one stereo channel. The color-coded topographic view (image 3) is based on a digital terrain model of the region, from which the topography of the landscape can be derived.